How could Bibi lose by offering 'ultimate deal' with Iran? 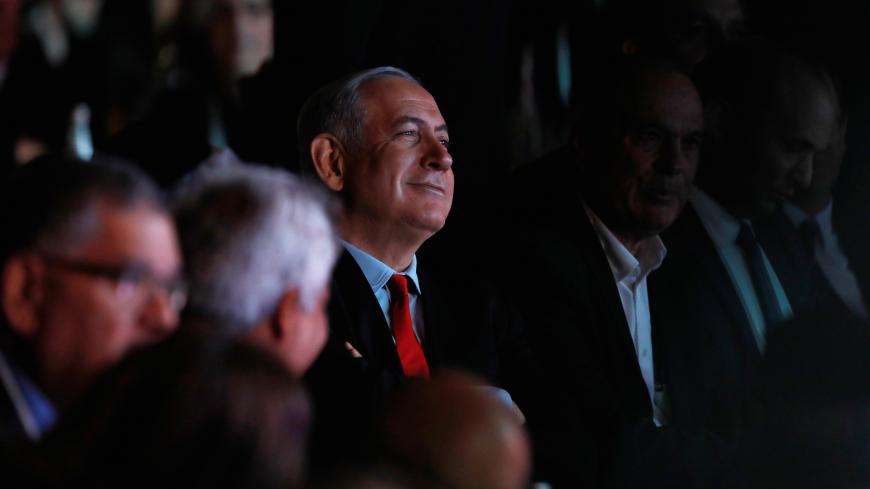 Israeli Prime Minister Benjamin Netanyahu sits in the audience ahead of a planned address at the Muni World 2018 conference in Tel Aviv, Israel, Feb. 14, 2018.

Last week this column wrote that US Acting Assistant Secretary of State for Near Eastern Affairs David Satterfield’s shuttle diplomacy between Lebanon and Israel over a disputed gas field “cannot ultimately be separated from either Syria or the broader issues in the region. There can be no talk about Block 9 without discussing the Blue Line, the disputed border demarcation between Israel and Lebanon, which cannot be disentangled from the Syria question, which in turn is connected to the relationships between the United States, Israel and Iran. … The Satterfield mission and the prospects of a back channel to Hezbollah and Iran, via the Lebanese government, may provide an opening to de-escalating a potential conflict on Israel’s borders, while beginning the needed spadework for an eventual settlement of Israel-Lebanon border issues.”

This week Akiva Eldar picks up the thread, writing, “When Israeli Energy Minister Yuval Steinitz said 'a diplomatic solution is preferable for both sides,' he is in fact confirming that Israel is conducting diplomatic contacts with Hezbollah. Israel claims, quite rightly, that Hezbollah is the regional sales rep of Iran’s Shiite republic. Therefore, Israel is also conducting negotiations with Iran.”

Eldar explains that there “are always ‘indirect’ contacts, such as the 2011 negotiations with the Hamas organizations on the deal for the release of captured Israeli soldier Gilad Shalit. Such was also the case when top Israeli officials met at the 1991 Madrid Conference with Palestinian representatives from the West Bank who, in fact, took their orders from the PLO, which Israel had not recognized at the time.”

“The American mediation efforts between Israel and Lebanon have reached a dead end,” Eldar continues. “The indirect negotiations between Israel, Hezbollah and Iran have made way for military threats. … What we do know is that Israel is not preparing to open a direct communications channel with Iran, and not just to discuss the gas dispute. This is in fact regrettable; Israel and Iran could forge the 'ultimate deal' for the sake of their security and well-being of their citizens.”

He concludes, “Netanyahu has a proven track record of convincing authorities in Washington to undermine Iranian interests for the sake of what he views as Israeli ones. It is time for him to use his influence to forge a new relationship with Iran based on mutual interests. This includes, of course, a regional peace arrangement and an end to Israel’s 50-year occupation of Palestinian land. At worst, the attempt will fall flat, the Saudis will be angry but Israel will have shown the world that it seeks peace. At best, Israel will fend off the threat from its strongest rival in the Middle East and from its partners in Syria and Lebanon. A deal with Iran will not wipe the slate clean on Netanyahu’s various police investigations, but it will signal the beginning of a major important chapter in the history of the State of Israel.”

An unusual Iraqi political alliance has caught the attention of Iran.

Ali Akbar Velayati, Iranian Supreme Leader Ayatollah Ali Khamenei's top adviser on international affairs, said during a visit to Iraq last month, “We will not allow liberals and communists to govern in Iraq.”

“Velayati was referring to the electoral alliance between the Sadrist movement, the civil movement and the Iraqi Communist Party in the upcoming elections,” Ali Mamouri writes. “Since the last elections in 2014, the leader of the Sadrist movement, Muqtada al-Sadr, has been adopting a stance independent of Iran. His followers have repeatedly shouted slogans against Iran and its regional symbols such as the Iranian Revolutionary Guard Corps' Quds Force commander, Maj. Gen. Qasem Soleimani.”

Velayati’s statements were deemed as unwelcome interference in the May elections by Iraq’s secular parties. Meanwhile, Velayati made the expected rounds. “In addition to his official meetings with President Fuad Masum and Prime Minister Haider al-Abadi, Velayati met with Shiite leaders close to Iran, such as former Prime Minister Nouri al-Maliki, head of the Wisdom Movement Ammar al-Hakim, head of the Badr Organization Hadi al-Amiri and Sheikh Humam Hamoudi, the head of the Islamic Supreme Council of Iraq,” Mamouri reports. “The choice of the figures Velayati met with indicates that Iran is apprehensive about the state of political disintegration within Iraq's Shiite community, which could have serious post-elections repercussions that would result in the formation of an Iraqi government that is more distant and independent from Iran. … As usual, Velayati failed to meet with top Shiite cleric Ali al-Sistani and other religious authorities during his trip to Najaf, because of the policy of the city’s religious figures not to receive Iranians who make inflammatory statements about Iraqi domestic affairs.”

He concludes, “Iran will continue to pressure its proxies in Iraq to set up a strong political alliance against their rivals in order to make sure they win a political majority that would enable them to form a government following the election."

Fazel Hawramy reports that “the Islamic State (IS) propaganda channels on the messaging app Telegram have been buzzing with reports of dozens of assassination attempts on Iraqi security forces, mainly in the Hawija area in southwestern Kirkuk province.”

“The litany of assassinations and warnings by some field commanders went generally unnoticed by the government in Baghdad, which is preoccupied with the upcoming elections in May,” Hawramy writes. “The government inertia continued until the afternoon of Feb. 18 when an intelligence unit of the Popular Mobilization Units (PMU) was ordered to go to Saadouniya village near Hawija, 290 kilometers (180 miles) north of Baghdad. A group of IS militants had laid an ambush for the PMU unit, and within half an hour of the arrival of the unit near the village, the young PMU fighters who were mainly from Basra and unfamiliar with the area were decimated.”

He adds, “There are fears that the response by the PMU to the Saadouniya massacre could alienate the local Sunni population, which is brutalized by three years of IS' bloody rule. The PMU has deployed a large force from its notorious, Iranian-backed Asaib Ahl al-Haq (League of the Righteous) to the area, which is certain to cause a further rift with the small Sunni population that has returned to the area. The day after the attack, a number of houses in the village of Saadouniya were blown up by the PMU on the pretext of belonging to IS members. One popular PMU Facebook page displayed images of severed heads of alleged IS militants and called for revenge.”