Kirkuk not as liberated from IS as claimed

Because of the crisis between Erbil and Baghdad over Kurdish independence, increased attacks by the Islamic State in the Kirkuk province have gone generally unnoticed by the government. 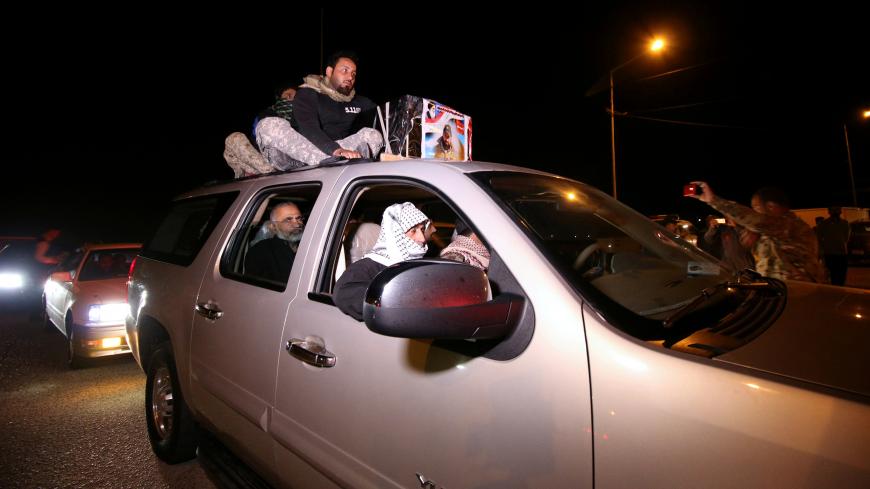 Iraqis mourn during the funeral of security members who were killed by an Islamic State militant ambush near the northern Iraqi city of Kirkuk, in Basra, Iraq, Feb. 19, 2018. - REUTERS/Essam Al- Sudani

SULAIMANIYAH, Iraq — For the last four months, as Kurds and the central government in Baghdad have been busy with their toxic rivalry over the Kurdistan independence referendum and over control of disputed territories, including Kirkuk, the Islamic State (IS) propaganda channels on the messaging app Telegram have been buzzing with reports of dozens of assassination attempts on Iraqi security forces, mainly in the Hawija area in southwestern Kirkuk province.

The litany of assassinations and warnings by some field commanders went generally unnoticed by the government in Baghdad, which is preoccupied with the upcoming elections in May.

The government inertia continued until the afternoon of Feb. 18 when an intelligence unit of the Popular Mobilization Units (PMU) was ordered to go to Saadouniya village near Hawija, 290 kilometers (180 miles) north of Baghdad. A group of IS militants had laid an ambush for the PMU unit, and within half an hour of the arrival of the unit near the village, the young PMU fighters who were mainly from Basra and unfamiliar with the area were decimated.

A video published on IS Nasher news Telegram channel allegedly of the ambush shows fierce fighting between the PMU fighters and IS militants armed with AK-47 and PKM machine guns and their ubiquitous GoPro camera with a number of vehicles on fire. Two weeks earlier, IS Nasher news released a photo story from Hawija labeled "The Life of a Mujahid" in which around half a dozen IS militants casually gathered around a campfire at night. The underlying message was that the group has a permanent presence in the area.

Many distraught families in Basra were startled to learn that IS could still stage such a daring raid in an area that Prime Minister Haider al-Abadi declared "liberated" in early October, and there were loud calls for a thorough investigation into the incident. How this group of PMU fighters fell into such an ambush and why no backup arrived on the scene to help them is not clear, but an investigation is underway and the government has launched an operation to clear the area of IS sleeper cells. It is not clear if this deadly attack is seen in Baghdad as a wakeup call to do something about the growing power of the IS militants in Hawija, which — on top of Erbil-Baghdad tensions — could bring further instability to the area.

While Iraqi officials have attributed the attack partly to poor weather conditions, the lack of a clear security strategy in Hawija area given the large number of government-backed forces — including Shiite and Sunni militias that have little coordination with each other and the destitution of the local population living still in camps for the internally displaced — could potentially turn Hawija into a staging ground for the re-emergence of IS and other armed groups.

“We requested several times to form a military committee in order to draw up a thorough plan for Hawija area to eradicate Daesh [IS] sleeper cells in the area,” Mohammad Mahdi Bayati, the head of Badr PMU forces in the south of Kirkuk, told Al-Monitor. “But our efforts were fruitless.” The Badr commander believes that there are still IS sleeper cells in the Hawija area with heavy guns, and unless there is a concerted effort to deal with the issue, the group will continue to cause problems in the area. One local official from the area who does not want to be named because of his government position said it is becoming increasingly dangerous to venture out at night in Hawija, and many officials prefer to spend the night in Kirkuk for fear of attacks from IS sleeper cells.

Abadi announced the liberation of Hawija, the last urban stronghold of IS, on Oct. 5 — describing it in a televised appearance as a “victory not just for Iraq but for the whole world” — while the US-led coalition called the operation “a swift and decisive victory.”

“There was haste in declaring the victory in Hawija because they wanted to announce the end of Daesh altogether,” Satar Tamimi, another PMU operational commander in Kirkuk, told Al-Monitor. “But Daesh ceased to exist only in the center of Hawija [and not the countryside].” Tamimi said that this latest attack was expected and indeed it was a "big blow."

But there are fears that the response by the PMU to the Saadouniya massacre could alienate the local Sunni population, which is brutalized by three years of IS' bloody rule. The PMU has deployed a large force from its notorious, Iranian-backed Asaib Ahl al-Haq (League of the Righteous) to the area, which is certain to cause a further rift with the small Sunni population that has returned to the area. The day after the attack, a number of houses in the village of Saadouniya were blown up by the PMU on the pretext of belonging to IS members. One popular PMU Facebook page displayed images of severed heads of alleged IS militants and called for revenge.

Hawija has always been a flashpoint since the overthrow of Saddam Hussein in the 2003 Iraq War. Prior to the emergence of IS in Iraq, in the spring of 2013, the city was the scene of some of the harshest crackdowns by then-Prime Minister Nouri al-Maliki. This led to widespread resentment against the central government, which was seen increasingly as a sectarian government. The sense of powerlessness and marginalization by the Sunnis in the Hawija area was one of the main reasons why IS found a fertile ground and turned the city into one of its strongholds in a short amount of time.

Sheikh Ahmad Obeid — a member of the Hawija district council and the spokesman for a Sunni force in the Hawija area called Hashd al-Watani — believes the ultimate solution is to form a force consisting of all the ethnic groups in the area to maintain security. “We have been saying that only a force from the people of Hawija could maintain security, but we were accused of making election propaganda,” Obeid told Al-Monitor, referring to the upcoming May national elections in the country. “But tell me who will answer now to the families of the 25 heroic Hashd fighters who were martyred?"

“No ethnic force can be successful in the Kirkuk area; the time has come to form a national force consisting of Arabs, Kurds, Sunni, [Shiite] and Turkmens supported by the government to maintain security in Kirkuk,” Obeid told Al-Monitor.