How religious movements gained the upper hand in Iraqi protests

The movement led by Shiite cleric Muqtada al-Sadr in Iraq has managed to stifle the pro-reform secular movement protests. 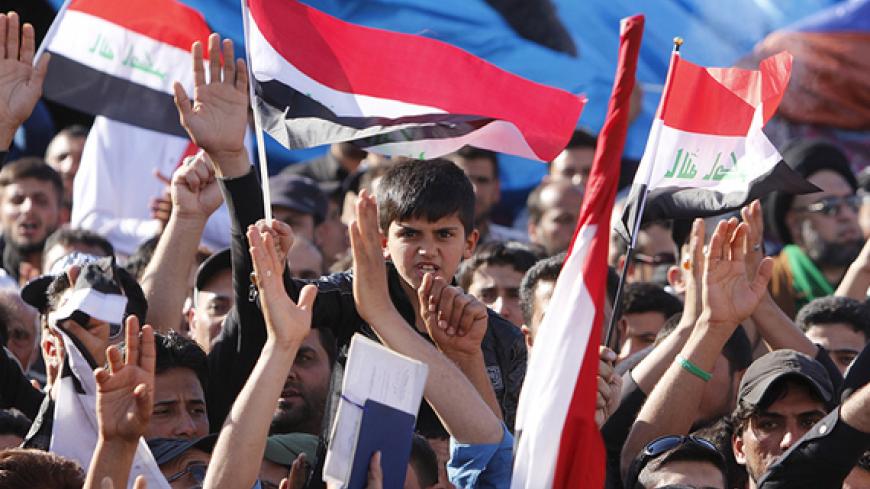 BAGHDAD — After weeks of protests in the streets of Baghdad, Iraqi Prime Minister Haider al-Abadi on March 31 handed the parliament his plan for major ministerial changes to fight corruption. The pressure recently brought to bear on Abadi grew from an unusual, arm's-length alliance between religious and secular groups.

In July, religious groups in Iraq such as the Sadrist movement allied with nonreligious civil movements to take to the streets and call for governmental reform, accountability of corrupt officials and improved services. These protests were termed secular because they criticized the clergy’s interference in politics and called for separation of church and state.

However, recently such protests took a new turn. On Feb. 26, hundreds of sympathizers of the radical Sadrist movement led by Shiite cleric Muqtada al-Sadr swarmed into Tahrir Square. Sadr has been pushing for reforms, a change in government ministers and the formation of a government of technocrats.

Sadrists drowned out the voices of secular protesters, taking control of the demonstrations and escalating them with a sit-in staged March 18 in front of the Green Zone in central Baghdad, which houses the Iraqi government institutions, parliament and embassies amid tight security measures. The protests called for holding corrupt officials accountable and turning them in.

Although the secular movement and the Sadrist movement have some sort of plan for shared political work, one might doubt the viability of their cooperation in these protests, especially since they are completely different.

While the secular movement calls for a modern, nonreligious state, the Sadrist movement calls for an Islamic state based on "velayat-e faqih" (guardianship of the Islamic jurist), which authorizes governance by Islamic clerics and fundamentalist legal views.

One might also wonder if the secular movement is trying to seek protection from a religious party to cover up its failure to achieve demonstrable results in the protests, which have been going on for several months, according to an Iraqi newspaper report March 6.

The shared political events between radical secular and religious movements pushed author Sadek al-Tay to wonder, in a March 8 article in Al-Quds al-Araby, “how the desire to establish a secular state, which is the civil movement’s demand, coincides with the goals of the Sadrist movement, which was founded on the [prospect] of a religious state.”

The Sadrist movement is part of the government and is allied with another religious movement, the Supreme Islamic Council, which is hostile toward secular movements. Jalal al-Din al-Zaghir, one of the council leaders, said in a Sept. 13 video that “secularists are the cause of the destruction of Iraq.”

This alliance between the secular movement and the Sadrist movement seems to be contradictory on many levels. What can possibly bring together a secular movement advocating freedoms and women's emancipation with a religious faction that restricts basic personal freedoms?

The protests called for by Sadr seem to have stifled the secular movement protests.

Parliament member Shorouq al-Abeji, representing the secular movement, decided to wear a veil while visiting Green Zone sit-ins March 18 so as not to offend hard-line members of the Sadrist movement, who formed the majority of protesters. The fact that she wore a chaste outfit, unlike her usual attire, did not go unnoticed, and she was criticized by the secular movement, which described her behavior as submissive.

Jassim al-Hilfi, a member of the central committee of the Iraqi Communist Party, regularly participates in anti-government protests. He told Al-Ghad Press on March 15 that the alliance between the Sadrists and the secular activists reflects a cooperation, not an ideological alliance or an intellectual convergence.

"Each party has its own peculiarities; we cooperate to raise national demands,” he said.

Author Ali Hussein, a columnist for the left-leaning al-Mada daily, seems to share that attitude. He told Al-Monitor that the secular movement benefits from participating in protests staged by the Sadrists.

“The participation of secular forces in the sit-ins [rebuts] the accusations leveled against them of standing idle as events unfold," he said.

He noted, “Religious parties are skeptical about the Communist Party because of ideological differences."

Civic activist Hassan al-Shanoun, who participates in the protests staged every Friday, told Al-Monitor that the secular movement's association with the Sadrists’ sit-ins shows the rise of religious forces and their influence over the marginalized secular campaigns.

The political landscape in Iraq shows that the influence of political Islam has been on the rise since 2003 — when the United States toppled Iraqi President Saddam Hussein's regime — in parallel with the decline of the influence of Iraqi leftist forces to the extent that communists, who are part of the leftist current in Iraq, were accused of political isolationism.

Political blogger and social media activist Shabib al-Medhati and Hamza al-Sultani, a supporter of the Sadrist movement, both told Al-Monitor they believe the Sadrist participation turned the protests into religious demonstrations.

However, writer Ali Hassan Fawaz told Al-Monitor, “These are popular protests. Even if some religious groups have joined the protesting masses, the [ongoing protests] revealed the need for a secular state, following the failure by numerous symbols of political Islam to achieve such a state.”

The failure of Arab political regimes such as those in Syria, Iraq, Jordan and Egypt — mostly those established after World War II ended in 1945 — led the Arab people to support Islamic parties and oppositions, brandishing the slogan “Islam is the solution." The influence of these religious parties seems to have escalated, while the influence of secular and leftist forces has diminished.

This is especially true in Iraq, particularly after the US invasion in 2003, when strife broke out and the role of religious parties in the Iraqi political arena increased.

The cooperation between secular and religious leaders in the protests reflects a deep-rooted crisis in Iraq. From a political standpoint, this cooperation may indicate a tactic used by both sides to regain people's confidence and reach efficient solutions for Iraq’s political and economic problems.