A special report on the February attack on parliament speaker Ali Larijani in Qom reveals an organized campaign to disrupt the public events of political rivals. 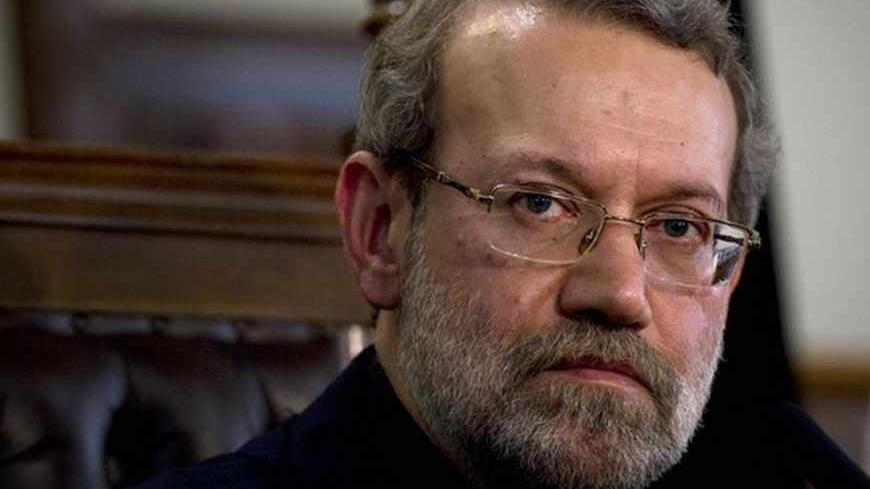 TEHRAN, Iran — When parliament speaker Ali Larijani was attacked with prayer stones and shoes in the city of Qom on Feb. 10, a powerful figure with ties in the upper echelon of power in the Islamic Republic of Iran seemed truly vulnerable for the first time. Larijani, who has been the speaker of parliament for the last six years, has also presided over the powerful Islamic Republic of Iran Broadcasting, served as the minister of Culture and Islamic Guidance, secretary of the Supreme National Security Council and as the interim commander of the Islamic Revolutionary Guard Corps (IRGC).

Larijani’s experience and political clout made him appear invincible. However, when he was insulted and attacked at the 35th anniversary of the Islamic Revolution in Iran during his speech at the shrine of Masumah, his public humiliation received wide coverage in both domestic and foreign press.

Exactly one week before this incident, former President Mahmoud Ahmadinejad broadcast on the parliament floor a tape of Larijani’s younger brother bribing the head of the Social Security Agency. The closeness of the two events led many to believe that Ahmadinejad’s supporters were behind the public attack on Larijani in Qom.

However, a special report by the National Security Commission in parliament revealed that other, hidden hands may have been behind Larijani’s public disgrace and that divisions within the Islamic Republic run very deep, a troubling sign for Supreme Leader Ayatollah Ali Khamenei, who expects President Hassan Rouhani to solve Iran’s factional fighting.

In the introduction of the parliament report titled “The Disturbance of 22 Bahman,” which was read aloud during a public session of the parliament by Hossein Naghavi, the parliament’s National Security Commission spokesman, six other public incidents carried out by “extreme or rogue currents” in recent years were noted, such as “insults” against Ayatollah Hashemi Rafsanjani, the head of the Expediency Council, on June 5, 2006; chants of “death to those opposed to velayat-e faqih” during speeches by Ayatollah Amoli and Ayatollah Ostadi; insults toward Ayatollah Khomeini’s grandson, Hassan Khomeini, during the 2009 anniversary of the death of the founder of the Islamic Revolution; chants against Larijani on Quds Day; and chants of “death to those opposed to velayat-e faqih” and “unwise marja” against Ayatollah Safi Golpayegani.

The report names the prime culprits behind these incidents to be a group of individuals referred to as the “Parto Circle.” It is believed that this group is comprised of individuals close to the Imam Khomeini Institute, which is run under the supervision of Ayatollah Mesbah Yazdi. The report states that the attack on Larijani was part of an “organized” campaign and lists 14 points explaining the activities of the Parto Circle days before the attack.

The son of a retired military commander in Qom who frequently attends speeches by politicians and Ayatollahs told Al-Monitor in a telephone interview, “This is a pressure group that disrupts events and speeches. The main ring of this group is from the Masoumeeye School. This school is located right behind the Imam Khomeini Institute on Qom’s Amin Boulevard. As you know, the institute belongs to Mesbah Yazdi and is perhaps one of the best equipped religious institutions.”

He continued, “More than anything else in the Masoumeeye School, they organize attacks against people. They are radical people. When [Mesbah Yazdi] was close to Ahmadinejad, they organized Ahmadinejad’s campaign and his nightly leaflets against Rafsanjani.” He was referring to the 2005 and 2009 presidential elections, before Ahmadinejad and Mesbah Yazdi had a public falling out when Ahmadinejad challenged Khamenei by attempting to dismiss the intelligence minister in the spring of 2011.

My source in Qom added: “The individuals in the Parto Circle are seminary students and if you watch the YouTube film of the attack on the home of Ayatollah Yousef Saanei, who is one of the ayatollahs to support the Green Movement, all the people there are from this circle.”

A journalist from the city of Qom who wants to remain anonymous also told Al-Monitor, “These people enjoy insulting well-known clerics and influential individuals, despite the fact that Mesbah Yazdi himself condemns the events afterward. However, no official statement has been issued from the institute condemning the events. People only proceed to condemn the attacks after Mesbah Yazdi criticizes them. The night before the attack on Larijani in Masumah’s shrine, some of the parliamentary members belonging to the Steadfast Front and more specifically Mr. Rasaei personally began organizing these people in Arab’s Hosseinieh on Amar Yasser Street in Qom.”

Hamidreza Resaei is a member of parliament who belongs to the Steadfast Front. A few months before the ninth parliamentary election, the Steadfast Front was founded with the leadership of Ayatollah Mesbah Yazdi. Generally speaking, the people who had left the administration and were not aligned with Ahmadinejad’s new rebellious approach joined this political faction.

Other than the Parto Circle and parliamentary members close to Mesbah Yazdi, the fingerprints of some IRGC commanders could also be found on the attacks against Larijani. On July 25, Bultan News, a website close to security officials, by referring a nine-page classified report of the parliament’s investigation, mentioned the role of “the supervisor of the IRGC’s intelligence office of the Ali Ibn Ali Taleb Corps who has been fired,” “the commander of the Ashoura battalion,” “the chief of staff of the Qom governor” and some other local military and security officials in Larijani’s attack.

Parliament voted overwhelmingly to refer the report to the judiciary. However, it is unlikely that much will come of it.

“This isn’t Switzerland” the editor of the Reformist newspaper told me. “[The Head of judiciary] Sadegh Larijani cannot issue a ruling against Mesbah Yazdi or Sepah [IRGC]. Both of them have the backing of Ayatollah Khamenei. They have immunity.”

Whether or not they have immunity, their ability to disrupt events and cause public embarrassment is something Ayatollah Khamenei is seeking to avoid the next four years under Rouhani, who is expected to address, or at least drastically lesson, the factional fighting that plagued Ahmadinejad’s second term.

One of Ayatollah Khamenei’s concerns in his speeches has been the need to end internal divisions and dissent, which he believes aids the enemy. The beginning of the Qom report even noted Khamenei’s position against the attack and other disturbances.

“I am against calling people opposed to velayat-e faqih or unwise,” Khamenei said. “I am against what happened in Qom. Numerous times I have warned officials to prevent these types of events. If these individuals are really Hezbollah and religious, they will not do this.” The report also states that a special “several-hundred page” report was prepared and sent to Khamenei’s office.

Despite Khamenei’s warnings, factional fighting does not appear to have gone away. A Reformist political analyst told Al-Monitor, “In my opinion, the work of groups who organize these disturbances will become much harder. Groups like Ayatollah Mesbah Yazdi’s [Parto Circle], the paramilitary forces of Hezbollah and the IRGC. However, now that the president is closer to Reformists, their attacks will be directed toward the Reformists and Rouhani’s ministers. The threats have already started. In my opinion, chaos will continue.”