The Shiite Crescent, a fertile area for rising political Shiism in recent decades, is now witnessing the rise of new, secular Shiism. 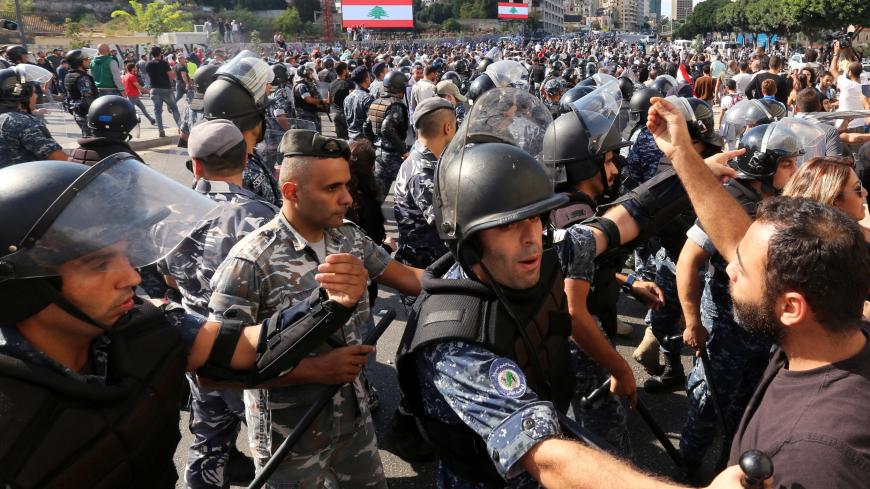 Anti-riot police stand guard after supporters of the Lebanese Shiite groups Hezbollah and Amal fought with protesters at a roadblock on a main road in Beirut, Oct. 29, 2019. - REUTERS/Aziz Taher

Following the fall of the Sunni-dominated Baathist regime in Iraq, Jordan’s King Abdullah II warned in in 2004 about the rise of a religious-political movement based on Shiite political Islam in the Middle East, which he called the “Shiite Crescent” and later the "Iranian Crescent." This crescent stretches from Iran to the Gulf to Iraq and then Lebanon.

But now this same area is witnessing a new Shiism that opposes political Islam and is calling for secular democracy. Indeed, some religious leaders in the main three countries of the crescent — Iran, Iraq, and Lebanon — are developing a new theology that supports secularism.

The representative of Iraq's top cleric, Ayatollah Ali al-Sistani, said in a Friday sermon in Najaf on Dec. 20, “People are the source of authority and it receives its legitimacy from them.” Then he asked politicians to go to the people to help resolve the current crisis, to listen to them and to organize early elections after forming an independent electoral commission and a fair electoral law. He warned about foreign inference in Iraqi matters, a reference to Iran in particular as well as to other influential foreign parties in Iraq.

In previous speeches, he criticized the idea of “guardianship of the Islamic jurist” (velayat-e faqih), which is the political form of the state in Iran, saying, “The religious authority only provides advice and recommendations in the direction of the people's interests, but in the end, it is the people who decide what is the best for their current lives and future without any guardianship from any parties on them.”

During his religious leadership, Sistani has articulated a secular political doctrine, the "civil state," in opposition to velayat-e faqih. He also has supported the idea of separation between the state and the religious institution.

A senior cleric close to Sistani told Al-Monitor that Najaf seminary supports liberal secular democracy and it is opposing all types of theocracy. He added if you follow Sistani statements and speeches you will find a clear direction toward the west and opposite to the direction adopted by the Iranian regime.

In Lebanon, the mass protests are supported strongly by clerics influenced by Iraq’s Najaf seminary.

Sheikh Yaser Oda, a prominent Shiite cleric, has been slamming two top Shiite leaders, Hassan Nasrallah and Nabih Berri, for their threats against the protesters and for accusing them of being affiliated with the United States and Israel.

Members of Berri’s Amal movement and Nasrollah’s Hezbollah Party attacked protesters in Beirut on Dec. 17, injuring some of them.

Oda is a part of the school opposing velayat-e faqih in Lebanon. This school was built up by several Shiite clerics, most notably, Mohammad Mehdi Shamseddin (1936-2001), who was Sistani's classmate, sharing the idea of the civil state with him. Shamseddin has been calling for “guardianship of the human” instead of guardianship of clerics.

A former Hezbollah secretary-general, Sheikh Subhi al-Tufayli, is also one of several Shiite Lebanese clerics influenced by Najaf, opposing the idea of velayat-e faqih and Hezbollah's affiliation with Iran.

In an interview with Al-Monitor in 2014, the prominent Lebanese cleric Hani Fahs said, “I am calling for a civil, modern, democratic and pluralistic state based on citizenship, rights, law and human rights to necessarily preserve religion from the evil of some pious people who randomly mix religion with the state.”

In the same vein, some Reformists in Iran have been supporting the protest movement in the country and slamming Supreme Leader Ayatollah Ali Khamenei for his brutal reaction against the demonstrators; hundreds were killed in November.

A prominent Iranian reformist, Mir Hossein Mousavi, on Nov. 30 criticized Khamenei and his absolute authority based on the idea of velayat-e faqih. He told Khamenei in a public letter that his brutal action against the protesters would lead to a new revolution in the future.

Reformist leader Mohammad Taghi Karroubi, who is the son of Reformist cleric Mehdi Karroubi, called Khamenei a dictator who is exploiting religion to expand his political power.

Iranian Reformist theologians such as Abdolkarim Soroush, Mohammad Mojtahed Shabestari and Mostafa Malekian have been building a modern Shiite theology in favor of a secular political system.

It seems the accumulation of the efforts of reformists, theologians and clerics in recent decades in Iran, Iraq, and Lebanon has paid fruit in the streets, causing many to desire a Shiism that is outside of politics.

This Shiism is an inclusive, pluralistic, nationalist and secular Shiism that believe in liberal values in a friendly relationship with religious values according to a modern Shiite theology.

More than 13 years ago, the Iranian-American academic and author Vali Nasr said the region was witnessing the rise of Iran-centric political Shiism. But it appears that the failure of Tehran's policies in the region have caused a backlash against Iran, opening space for calls for a secular rather than a religious state.