Will Iran take up Trump’s offer to ‘make a deal together’?

President Donald Trump may be ready for another deal with Iran, and if so, Tehran’s leaders should take him up on it. 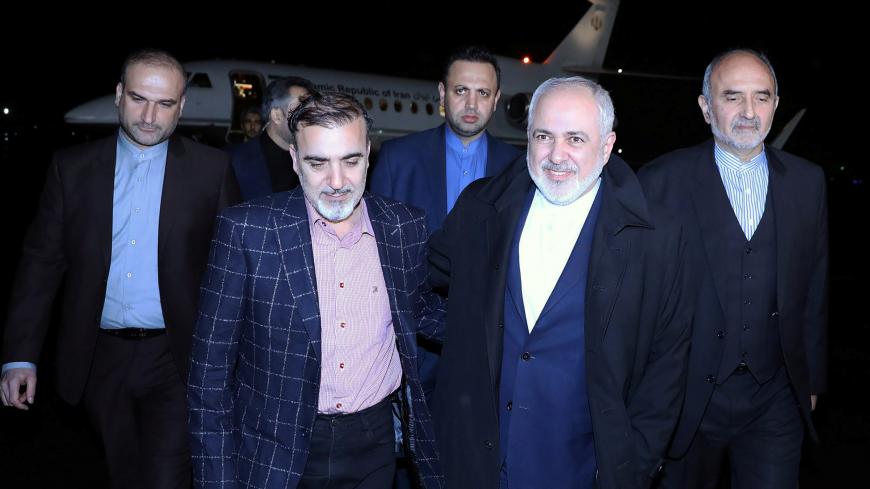 Trump, Iran and the art of the deal on US prisoners

US President Donald Trump may be ready for another deal with Iran, and if so, Tehran’s leaders should take him up on it.

Iran released Princeton graduate student Xiyue Wang Dec. 7 in exchange for Iranian scientist Masoud Soleimani, who was imprisoned in the United States for failing to obtain the required licenses for human growth products.

Trump tweeted Dec. 7, regarding Wang, “Taken during the Obama Administration (despite $150 Billion gift), returned during the Trump Administration. Thank you to Iran on a very fair negotiation. See, we can make a deal together!”

Thanking Iran for a "fair negotiation" is hardly diplomatic chump change in Trump’s world. The "see …" may have been a mild "I told you so" to Hassan Rouhani — if the Iranian president had agreed to meet in September at the UN General Assembly, as Trump wanted, they might have secured a deal to allow Iran to export some of its oil. Rohollah Faghihi has the backstory on those negotiations.

The missed opportunity at the United Nations reveals that US-Iran diplomacy has a pulse, if a faint one. The prospect of a workaround credit arrangement for Iran to sell oil while under US sanctions is being kept warm, including by Japan Prime Minister Shinzo Abe, who hosted Rouhani in Tokyo last week. Trump and Abe spoke Dec. 21, while Rouhani was still in Tokyo. Although the readout of the call from Abe’s office did not mention Iran, one can imagine Trump asked, and received, a brief on Rouhani’s visit. Rouhani said that same day in Japan, “We have no problem with talking with the US about our problems if they return from the wrong path that they have taken in the past 1.5 years. After all, we should not hail someone who has done something wrong and violated the law, but in the meantime, we should not close the door.”

Iran’s leaders are skittish about negotiating with Trump. The US withdrawal from the Iran nuclear deal that was so painstakingly negotiated with the Obama administration, the imposition of devastating US sanctions on Iran’s oil exports, massive protests sparked by a reduction in fuel subsidies, and an economic downturn have been used by conservative political opponents to assail Rouhani. One Iranian official described negotiations with the United States as a potential kiss of death for Rouhani, given the domestic political perils. The Reformist camp is expected to lose big to hard-liners in the February 2020 parliamentary elections.

In Washington, Iran hawks exude a kind of breathless excitement of a seemingly imminent fall of the "regime" as a result of US sanctions and recent protests, which have been brutally suppressed by Iran. While we are not betting the farm in 2020 on opposition figures seeking favor in Beltway salons, there is no question that Iran is hurting, and people are expressing growing frustration with the Iranian government’s corruption, poor governance and human rights abuses.

Trump gets that this all gives the United States leverage, and that brings us back to the prisoner exchange and opening for dialogue.

Washington and Tehran have established a formula for a mutual win.

For Iran, an exchange of prisoners is no longer about capitulation to US pressure, or the faint promise of something else after. It can be about a swap, and a win for Rouhani, as well as Trump. The cases of Iranians detained in the United States has political currency in Iran. Iran Foreign Minister Mohammad Javad Zarif portrayed the release of Soleimani as a hard-won victory for Iranian diplomacy.

Trump is rightly proud of his record on securing the release of Americans held captive abroad — in Egypt, Turkey and North Korea — and now Iran. This is often underreported, sometimes not even mentioned, in the regular cavalcade of critical pieces about his too-close ties with the world’s "dictators." US Assistant Secretary of State for Near Eastern Affairs David Schenker took up the case of detained American Moustafa Kassem in Cairo last week.

While there is little constituency for US-Iran diplomacy outside of a cohort of pro-engagement US foreign policy elites — not Trump’s usual constituency — Americans care greatly about their fellow citizens unjustly held in foreign jails.

Getting these Americans released from foreign jails is a rightful political windfall, a result of skillful diplomatic execution, and, in the case of Iran, an opening to take on other issues.

Vali Nasr and Ali Vaez write in The New York Times that there is an urgency to US-Iran talks before the expected hard-liner win in February’s parliamentary elections. Our take is that Trump wants the remaining US citizens released and a better nuclear deal than Obama negotiated — and is not banking on the fall of the Iranian government anytime soon. Both official and unofficial contacts continue regarding further swaps via the Swiss government (Laura Rozen has the back story here). This is no time for a break; it's time, again, for the art of the deal.

The region is “witnessing a new Shiism that opposes political Islam and is calling for secular democracy. Indeed, some religious leaders in the main three countries of the [Shiite] crescent — Iran, Iraq and Lebanon — are developing a new theology that supports secularism,” writes Ali Mamouri.

Iran has held sway in Iraq and Lebanon, where its political allies have longstanding ties to Tehran — an array of Shiite parties in Iraq, and most prominently Hezbollah in Lebanon.

The secular trend among Shiite youth protesting in Iraq and Lebanon has its foundations in a modern version of Shiism espoused by Grand Ayatollah Ali Sistani, the most revered Shiite religious authority in Iraq and indeed Shiite Islam. Sistani, who was born in Iran, is based in Najaf, Iraq, and identifies as Iraqi. The Najafi theological school has traditionally endorsed a separation of church and state, in contrast to the rival powerhouse seminarians in Qom, Iran, led by Iran Supreme Leader Ayatollah Ali Khamenei, who endorses velayat-e faqih, or the role of the jurisprudent, meaning the ayatollahs themselves.

“During his religious leadership, Sistani has articulated a secular political doctrine, the 'civil state,' in opposition to velayat-e faqih,” explains Mamouri. “He also has supported the idea of separation between the state and the religious institution.”

A senior cleric close to Sistani told Mamouri that “if you follow Sistani statements and speeches you will find a clear direction toward the West and opposite to the direction adopted by the Iranian regime."

“It seems the accumulation of the efforts of reformists, theologians and clerics in recent decades in Iran, Iraq and Lebanon has paid fruit in the streets, causing many to desire a Shiism that is outside of politics,” concludes Mamouri. “This Shiism is an inclusive, pluralistic, nationalist and secular Shiism that believes in liberal values in a friendly relationship with religious values according to a modern Shiite theology.”

Mamouri has documented this trend for years. In 2016, for example, he noted that Iraq’s Islamist parties were "witnessing a major crisis,” adding that “a secular discourse may soon emerge to rival that of the Islamist parties.” He also wrote about the trend in a May 2018 piece titled "The dueling ayatollahs."