How to rein in Iraq's Popular Mobilization Units

There is an urgent need to organize the Popular Mobilization Units' various groups under the government’s control to avoid chaos and internal divisions that some parties might exploit to achieve their regional agendas. 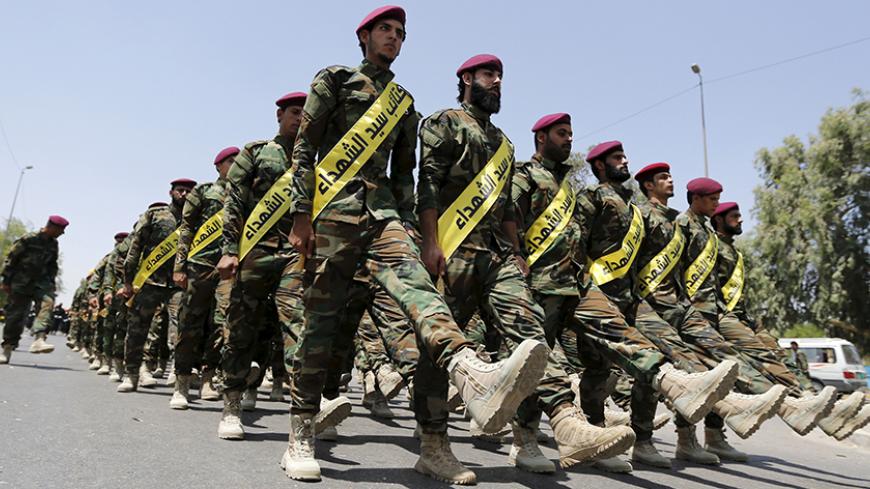 Iraqi Shiite Muslim men from the Popular Mobilization Units march during a parade marking the annual Quds Day, or Jerusalem Day, on the last Friday of the Muslim holy month of Ramadan, Baghdad, July 10, 2015. - REUTERS/Thaier al-Sudani

In the battle against the Islamic State (IS), it seems clear that some forces rallying under the umbrella of Iraq's Popular Mobilization Units have direct ideological and organizational links to the Iranians. The affiliation to a foreign country raises a red flag as to what role and influence these forces eventually could hold.

These foreign-linked forces are mostly former militias that were founded through direct Iranian support, either during the Iran-Iraq War or after 2003, as Iran attempted to support the Iraqi resistance against the United States. Most notably among these groups are the Badr Organization, Asa’ib Ahl al-Haq, the Hezbollah Brigades and Saraya al-Khorasani.

In March — amid the battle with IS for Tikrit and after the US-led coalition conducted strikes against IS — a number of militias that had joined the Popular Mobilization Units suspended their participation in the fighting in protest against what they described as “the US intervention."

Hadi al-Amiri, leader of the Iraqi political party Badr Organization, headed a meeting that month in which the militias threatened, “The militias will not break into Tikrit and will leave the task [of liberating Tikrit] to the police and army without cooperating with them, if the coalition and the government insist on this [US] participation.”

Then in August, some of the units apparently again threatened to stop fighting. Al-Araby al-Jadeed quoted an anonymous source as saying the militias would withdraw from battle if Prime Minister Nouri al-Maliki was put on trial for his role in the fall of Mosul to IS.

Al-Monitor learned from Popular Mobilization Units' military sources that the situation is different for each of its units. While the Iran-linked units are largely supported and regularly receive salaries and equipment from Iran, the other units — which are supposed to be under the Iraqi government’s control — are not being paid and lack aid and military equipment.

The military commander of the holy shrine of al-Ataba al-Abbasiya Brigade, which is associated with the Shiite holy shrine of Imam al-Abbas in Karbala, told Al-Monitor by phone, “There is a clear discrimination between the Iran-linked forces and other forces [within the Popular Mobilization Units] in terms of receiving support and aid that is provided by Iran in the war against IS."

He said, "We have [scant resources] through what the Iraqi government and holy shrines offer. This is while the situation of the Badr Organization, Asa'ib Ahl al-Haq and Hezbollah Brigades is much better than ours, and they do not originally rely on the [Iraqi] government and the Iraqi army.”

A number of the units demonstrated Aug. 21 in Baghdad, protesting that the Iraqi government had not paid their salaries for several months. Because of the lack of support and paychecks, the number of volunteers in those fighting units has dwindled.

The Popular Mobilization Units also faces an organizational problem that can be traced to volunteers' different social and religious backgrounds.

In his fatwa on June 13, 2014, to join the armed forces in the fight against IS, Grand Ayatollah Ali al-Sistani clearly emphasized that “volunteering should be legally and meticulously governed to avoid chaos and illegal acts.” Sistani stressed on several occasions that “all security forces including the Popular Mobilization Units must be under the state’s full control.”

Under the current circumstances, there is an urgent need to reorganize the units to ensure its full allegiance to the Iraqi state and establish its affiliation with the army and government departments of the armed forces. Such changes are necessary to keep the forces from being exploited to advance the agendas of internal political parties or regional powers.

Many people believe a National Guard could be the legal umbrella needed to resolve the Popular Mobilization Units' crisis. A guard could be formed by distributing the various groups into military units affiliated with the Iraqi army within territorial divisions in Iraq. Thus, the Iraqi government will be able to reorganize these forces within the official Iraqi army system.

There were leaks during the Tikrit battles in March that the US government had opened communication lines with part of the Popular Mobilization Units not affiliated with Iran. These communications, along with greater support, are necessary to achieve an internal balance within the units and to prevent Iran from controlling these forces and using them as leverage to advance its regional agenda and expand its influence, especially in the Shiite parts of the Arab world.

The Popular Mobilization Units' situation is a major challenge facing Prime Minister Haider al-Abadi, not only now but also in the future, as it will generate a surplus of power once the IS issue is over. This surplus subsequently will move to the political arena to assume a prominent role. It is also possible that forces not fully affiliated with the Iraqi government could be exploited to support partisan or regional powers’ political agendas.