Why Iraq needs to depoliticize their Popular Mobilization Units

Iraq’s Popular Mobilization Units are made up of several groups whose political interests differ, clashing sometimes, which is causing the units to shift focus from the most urgent need — fighting the Islamic State. 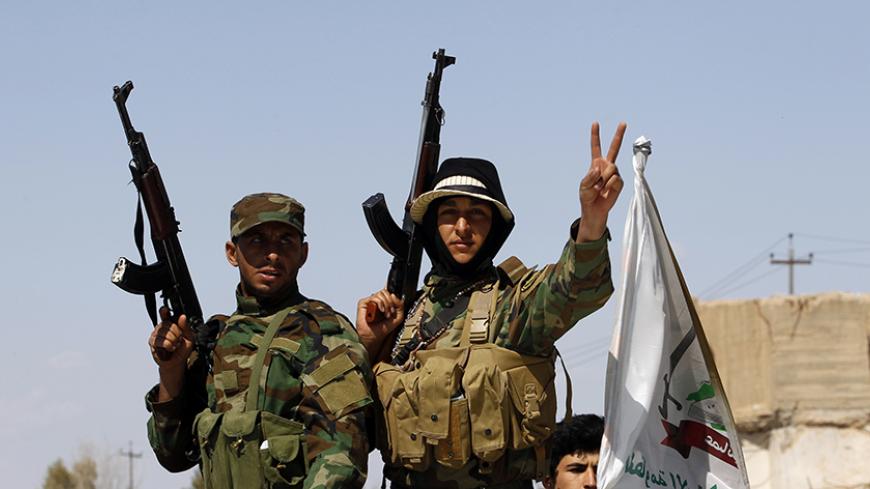 The prevailing confusion in Iraq and abroad over the role of the Popular Mobilization Units in the military operations and impact on the present and future political decisions in Iraq can be explained by this military force — which consists of volunteers and members of armed groups — having been so far the most efficient force in countering the Islamic State (IS), as it succeeded in shrinking the risks of a possible IS expansion to Baghdad and southern Iraq.

Despite the misunderstanding and conflicting information on the units’ nature and activities, its legitimacy derives from “the righteous jihad” fatwa that was issued June 2014 by the highest Shiite authority in Iraq, Grand Ayatollah Ali al-Sistani.

The fatwa states that Iraqi citizens who are able to take up arms should volunteer in the ranks of the security forces to defend the country. However, there are some who considered the fatwa a call for Shiites to take up arms against the Sunnis, despite the fact that the fatwa identified thwarting the terrorist threat as a collective responsibility and not the responsibility of a specific sect or party.

The Popular Mobilization Units' success in halting IS expansion and reclaiming important parts of southern Baghdad, Diyala and Salahuddin has endowed it with extra legitimacy, which was needed in light of the Iraqi army’s defeat, when Mosul fell into the hands of IS on June 10, 2014.

Yet, another source of legitimacy is that the Iraqi government officially considered in April the Popular Mobilization Units an official force under the wing of the state, from which its members receive their salaries, weapons and equipment.

Hopefully, the units will turn into a state institution legally, through the National Guard bill, which is still pending approval due to the political disputes surrounding it. The bill allows the formation of security forces inside a specific province made up of the province’s residents.

Legitimizing the units is necessary to clear up the confusion surrounding this entity and also to prevent any politicization of the forces to the benefit of a particular party.

The groups making up the Popular Mobilization Units consist of three categories.

The first are the groups that were formed following Sistani’s fatwa. They have no political roots or political ambitions, and some are directly linked to the religious authority’s offices.

The second are groups that were formed by political parties or are initially the military wings of these parties. They include the Ashura Brigades, which is affiliated with the Islamic Supreme Council of Iraq, the Saraya al-Salam (Peace Brigades) of the Sadrist Movement and Badr Corps of the Badr Organization. These groups have political roots and follow different religious authorities.

The third are the armed groups that have been present in Iraq for years and have fought battles against US forces and participated in operations in Syria. They include the Asa'ib Ahl al-Haq, the Hezbollah Brigades, Liwa Abu al-Fadl al-Abbas, Saraya al-Khorasani and others. These factions have political ambitions and some of them ran in the 2014 elections, such as the Asa'ib Ahl al-Haq, under the al-Sadiqoun Bloc.

The majority of the groups making up the Popular Mobilization Units descend from parties that have their individual ambitions and goals. These groups, through participating in the units’ activities, seek to change the political environment to what serves them and ensures their long-term interests.

The latest dispute between Basra Gov. Majid al-Nasrawi and units' representative in Basra Salam al-Dirawi — after Nasrawi refused to cooperate with him in June — revealed that some of the units' groups could possibly turn into political tools. Nasrawi, a member of the Islamic Supreme Council of Iraq and a close associate to the Ashura Brigades, dismissed Dirawi after he accused the latter of using the Popular Mobilization Units to achieve political and economic purposes. At the same time, Dirawi accused Nasrawi of politicizing the Ashura Brigades and using them to defend himself.

The recognition of the Popular Mobilization Units’ role in the protection of Iraq must be met with the recognition of the need to protect them, determine their role in the face of IS and prevent them from being involved in political or economic conflicts. This can only be achieved by containing these groups within the state, under the National Guard bill, in order for the state to be able to dissociate them from their political roots.

The persistent differences over the National Guard bill and not moving forward with it to include both Shiite and Sunni volunteers in the fight against IS do not serve anyone. Discussing the bill seriously is required in a way that protects the state structure and gives it the ability to sponsor and contain the armed forces in order for them to be the state’s military and security arms without any individual political or partisan characterization.