Saraya al-Khorasani appears to have more direct contact and cooperation with Iran than other groups and militias it has ties with. 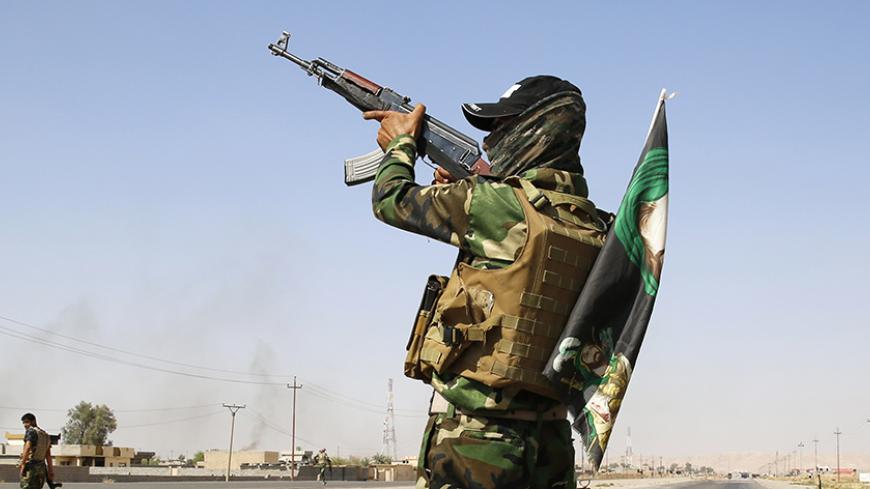 A fighter from the Shiite Badr Brigade militia wears a religious flag as he fires in the air at a checkpoint seized from Islamtic State militants outside the town of Amerli, Sept. 5, 2014. - REUTERS/Ahmed Jadallah

When the major city of Mosul was occupied by the paramilitary forces of the Islamic State group (IS), Tehran was alarmed even before Washington. IS’ quick attacks and unexpected expansion confused the leaders and politicians of neighboring countries for weeks. There were many discussions regarding how Iran might respond to the crisis in Iraq. However, as always, Tehran was able formulate its own military and security strategies, and by utilizing the Quds Force, a special unit of Iran's Revolutionary Guard Corps (IRGC), was able block the progress of the forces of Abu Bakr al-Baghdadi.

In this case, Iran extended its policy of taking an advisory role, as well as providing support for Shiite groups from Syria to Iraq. The IRGC’s Quds Force is in charge of protecting the military and security interests of Iran outside its borders. Quds Force head Maj.-Gen. Qasem Soleimani showed Iran’s determination in fighting against IS by being personally present in Iraq.

After Saddam Hussein was toppled in 2003, in an act of rivalry with the United States, Iran quickly started to form paramilitary groups in Iraq and also started to support those Iraqi politicians who had ties to Iran. Several groups including the Mahdi Army, which is connected to Muqtada al-Sadr, Asa'ib Ahl al-Haq, Liwa'a Zulfiqar, Kata'ib Sayyid al-Shuhada, Kata'ib Hezbollah, Liwa'a 'Ammar Ibn Yasir and Munadhamat Badr were formed in Iraq with the support of Tehran, especially after the United States withdrew its forces. The newest of these is Saraya al-Khorasani.

Saraya al-Khorasani is headed by Seyed Ali al-Yaseri, its secretary-general and the commander in chief in Iraq. He wrote on his official Facebook page: “The aim of Saraya al-Khorasani is to eradicate all those who, under the pretense of being Muslim, are violating people’s rights. This perverse Islamic group is a malignant disease and we will fight them. We are now determined to firmly and permanently destroy this al-Qaeda backed group in Iraq.”

So far, this group’s goals and red lines have been presented as follows:

There is no reliable evidence indicating that this group is collaborating with the national army of Iraq. However, the published videos and images linked to Saraya al-Khorasan show that this group faces no legal or security restrictions when it comes to managing or moving its forces.

Soleimani rarely appeared in front of cameras prior to the IS occupation of Iraqi territories. During the past few months, however, there have been many images of him alongside his Shiite allies in Iraq. Numerous times, he has taken photos with members and leaders of Saraya al-Khorasani and let different media outlets publish them.

As far as logistic and military equipment are concerned, this group uses a combination of weapons available in Iraq as well as Iranian weapons.

In the videos published by the group, members of Saraya al-Khorasan are not shown using vehicles provided by the army. Rather, it appears that a sponsor has provided them with numerous Mitsubishi and Hyundai vehicles.

In conclusion, it should be mentioned that this Shiite group quickly surpassed other Shiite groups and because of its direct ties to Tehran, received good logistic and military assistance.

The actions of these groups will not be judged only in the context of Iraqi political development. The victory or defeat of this group will be viewed as the result of Tehran’s activities in Iraq. Although there has been a US-led airstrike against IS, Iran has managed to act more quickly and effectively against IS by leading the battle on the ground. As a result, today, Iraqi Prime Minister Haider al-Abadi referrers to Tehran as Iraq’s friend and partner and calls Iran his own second country.