While the circumstances of Iran's Basij and Iraq's Popular Mobilization Units share similarities, there were differences in the domestic politics of the countries during the formation of these groups. 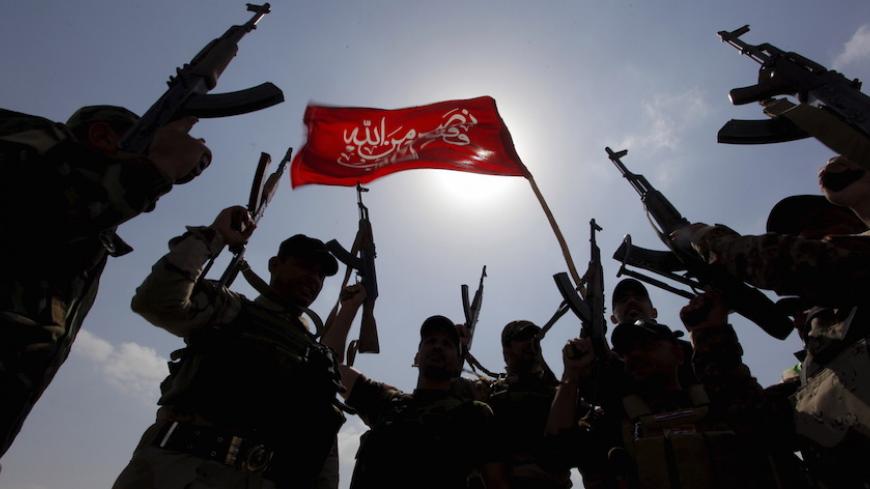 Iranian officials and Shiite authorities in Najaf reacted in June 2014 to the rapid advances of the Islamic State (IS) and its conquest of Iraqi cities by quickly organizing paramilitary forces. The Quds Force of Iran led by Qasem Soleimani quickly established dozens of paramilitary groups, mostly Shiite ones, to prevent IS from further expanding its forces. And during the past three months, the Shiite paramilitary forces, alongside the Iraqi army, started a series of offensive operations and managed to take back certain important cities. including Ramadi and Tikrit.

However, defeating the IS forces in Iraq is only a short-term goal for these Iran-led Shiite groups. They have negotiated with, and have put political pressure on, the Iraqi government to buy themselves legitimacy. Iraqi Prime Minister Haider al-Abadi officially announced that Hashid Shaabi Popular Mobilization Units) “is an official political party and a pillar of the Iraqi government.” Therefore, a budget has been allocated for Hashid Shaabi in the 2015 Iraqi budget. Hashid Shaabi forces number between 60,000 and 90,000.

The majority of the members of the Popular Mobilization Units are Twelver Shiites and thus listen to the fatwas issued by the Shiite authorities in Najaf and Iran's Supreme Leader Ayatollah Ali Khamenei. The name is somewhat similar to the name of the Iranian political-military force Sazman-e Basij-e Mostaz'afin (Organization for Mobilization of the Oppressed). The Basij was established in 1980 by the order of Ayatollah Ruhollah Khomeini with the aim of creating a 20-million member organization.

The Basij in Iran has 11 million volunteer members and 1 million active members from various backgrounds, including students, university students and government employees. The Basij in Iran is a subdivision of the Islamic Revolutionary Guard Corps (IRGC) and has defined specific tasks for itself. Among these tasks are “fulfilling Ayatollah Khomeini’s orders regarding the creation of international resistance units, creating necessary defense abilities among ordinary people, promoting abilities necessary for massive military operations and aiding the government.”

Similar to the Basij organization of Iran, the basij organization of Iraq was also established following a fatwa by the highest Shiite religious authority in Iraq, Grand Ayatollah Ali Sistani, on June 15, 2014. Following the recent actions taken by the Iraqi government, Iraq's version of the basij is now considered part of the country’s Interior Ministry. Other paramilitary groups such as the Mahdi Army, the Badr Brigades, Kata'ib Hezbollah of Iraq, Kata'ib Sayyid al-Shuhada, Kata’ib Imam Ali and Asa'ib Ahl al-Haq are all legally under the umbrella of the Iraqi basij. Such legal divisions allow the paramilitary Shiite groups to continue bearing arms under the protection of an official organization.

Among the most important commanders of Hashid Shaabi are Falih al-Fayyadh (the chairman of the basij committee), Abu Mahdi al-Muhandis (the deputy chairman of the basij committee), Hadi al-Ameri (head of the Badr Brigades), Qais al-Khazali (commander of Asa'ib Ahl al-Haq), Muqtada al-Sadr (head of the Peace Brigades) and Shibl al-Zaydi (commander of the Kata'ib Imam Ali). Certain Iranian paramilitary commanders, for example Jaber Rajabi — whose father was an IRGC general and was killed during the Iran-Iraq War — are also fighting alongside these Iraqi commanders. Soleimani also acts, indirectly and unofficially, as the commander-in-chief of these paramilitary forces.

These paramilitary forces use advanced equipment such as Abrams tanks, the M113 armored personnel carrier, the Iranian-made Safir armored personnel carrier, Humvees and the US-made M4 carbine. The monthly salary of the members of these paramilitary groups is $600 and for every 10 days of service, they have 10 days off. They also don’t answer to the Iraqi judiciary and will not be demoted, or summoned to court, if they violate the rules. In other words, as far as military equipment, logistical capabilities, financial benefits and legal immunity are concerned, the Popular Mobilization Units are currently much more capable, and important, than the Iraqi army. Also, the images show that the Iraqi version of the basij is now using tactical rockets such as Alghaher, Ababil, Burkan and Al-Montagham. Some of these rockets were designed by the engineering units of Hezbollah of Lebanon.

Aside from being a paramilitary group with millions of members, the Popular Mobilization Units — the Iraqi basij — are Iran’s most important political-security card in Iraq. Iran’s media outlets, during the past few months, have covered the news related to Popular Mobilization Units extensively. While the multiplicity of the Shiite forces in Iraq might be useful now that they are fighting against Daesh, or IS, it will prove to be a problem once Daesh is defeated.

Afshon Ostovar, Middle Eastern analyst for the Center for Strategic Studies, said, “The future of the [Hashid Shaabi] will depend on the Iraqi government’s commitment to continuing the development of the organization during the current conflict and afterward. The [Iranian] Basij gained its strength from the centralization of power within the Islamic Republic and that regime’s commitment to developing the Basij into a broad-based social, cultural and security organization. For the [Iraqi Hashid Shaabi] to become a similar organization, it would need a centralized political system above it that was committed to transforming the militia into a pro-regime institution. It would also need a lot of time to develop an organizational culture that provides the organization with a unifying identity and mission. Velayat-e faqih and the supreme leader have provided that unitary vision for Iran’s Basij.”

While the Sunnis might put up a short fight against Hashid Shaabi after Daesh is defeated, the Sunni world no longer has any effective weapon of influence in Iraq. As for Iran’s view, Ostovar said, "I think that the Islamic Republic — or at least the IRGC Quds Force — sees the [Hashid Shaabi] as the beginnings of an Iraqi basij. The Quds Force already has allied militias within Iraq that help promote a pro-Tehran agenda. It does not need the [Hashid Shaabi] to do that. But what it will want to ensure is that the [Hashid Shaabi] does not begin to compete with the other pro-Iranian militias for influence and instead works parallel and in concert with those militias to create a strong and stable foundation for pro-Iranian Shiite political organizations in Iraq."

After the 1979 Islamic Revolution, the Shiite authorities were able to organize a popular force called the Basij, and thus they managed to overcome the post-revolutionary unrest and establish their own positions in Iran. Now, the Popular Mobilization Units are the most important factor in Iraq. What role they come to play in post-unrest Iraq will depend on the strength of the rest of Iraq's institutions and players.