Iraq’s Popular Mobilization Units are following in the footsteps of Iran’s Basij in their recruitment and use of child soldiers. 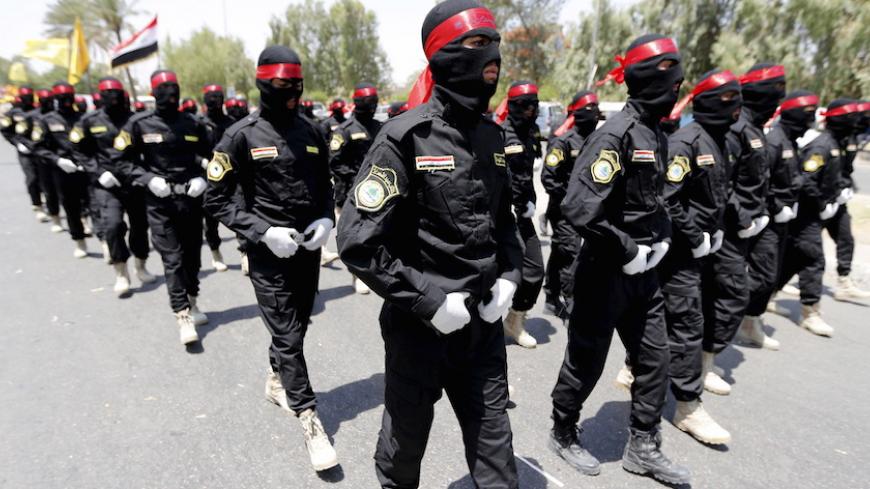 Iraqi Shiite Muslim men from the Popular Mobilization Units march during a parade marking the annual al-Quds Day during the Muslim holy month of Ramadan in Baghdad, July 10, 2015. - REUTERS/Thaier al-Sudani

The world has borne witness to countless crimes committed by Islamic State militants in Iraq and Syria over the past year. Iraqi and Syrian children have not been spared from these atrocities. Several reports by international human rights organizations have documented IS’ use of children for suicide operations, executing prisoners, guerrilla warfare and also as human shields.

While IS, as the main Sunni militant group in Iraq, is brainwashing children and young people to fight Shiites, largely Shiite forces such as the Iraqi Popular Mobilization Units are reportedly also training child soldiers to fight Sunni extremists, including IS.

Faisal al-Fahad, a former Iraqi professor of history at Basra University, spoke to Al-Monitor about the challenges Iraqi children face: “Unfortunately, after Operation Iraqi Freedom, children in my country have lived under different humanitarian, security and economic crises. As a result of these crises, they now have abhorrent mindsets. On the Sunni side, children are trained to fight Iranians, Shiites and Kurds. And on the other side, children are trained to fight against the Sunni opposition, Western countries and Israel; [and] to establish [prophesied redeemer of Islam] Imam Mahdi’s universal government. All the while, Shiite and Sunni children are executed, participate in suicide operations, trained to kill and have their entire existences engulfed in vengeance. It is worrying.”

The units, known as Hashid Shaabi in Arabic, is commanded by Badr Organization leader Hadi al-Ameri as well as Abu Mahdi al-Muhandis. Of note, the Badr Organization’s past incarnation, the Badr Brigades, was established by the Iranian Islamic Revolutionary Guard Corps during the 1980-88 Iran-Iraq War. Ameri maintains his close links with the IRGC. Meanwhile, Muhandis is officially on the US terror list.

While avoiding the excesses of IS, it appears that the largely Shiite forces making up the Popular Mobilization Units are not observing children's rights, either. As IS is clearly not the role model, what other experience could the Iraqi volunteer force be emulating in its use of child soldiers?

During the Iran-Iraq War, the Iranian military sent many children to the front lines. The paramilitary Basij was mainly responsible for organizing and deploying them. While Iran has always denied this use of child soldiers, the large number of battle fatalities under the age of 15 shows that Iranian military commanders had little trouble dispatching children to the front lines.

Bearing in mind the current situation in Iraq, can any similarities be discerned in the Popular Mobilization Units' and the Basij’s use of child soldiers?

First, it should be noted that the two forces — although neither are wholly Shiite — share a Shiite character in their establishment. The Popular Mobilization Units formed in response to a call by Grand Ayatollah Ali al-Sistani, while the Basij was formed upon the orders of Ayatollah Ruhollah Khomeini, the founder of the Islamic Republic of Iran.

Second, both the Basij and the Popular Mobilization Units feature children in war propaganda. As the main state supporter of Shiite militant groups in the Middle East, the IRGC is well engaged in psychological warfare against IS in Iraq. The IRGC has long experience in this field. Hossein Fahmideh, a 13-year-old Iranian killed during a military operation in which his own death was certain and then promoted as an Iranian national hero, is a case in point. The IRGC, Iranian media outlets and military propagandists have no qualms about expressing pride about similar operations involving children, not only in Iran but also in places such as Palestine, Lebanon, Iraq, Yemen and Syria. Of note, ads praising teenage “martyrs” are also commonplace on websites associated with Iraqi Shiite militants.

Third, both the Basij and the Popular Mobilization Units have heavy ideological and religious components. The Shiite clerics on Basij bases in Iran regularly teach ideology and religion to local children and adolescents. In Iraq, videos and media reports indicate that Shiite clerics fill a similar function among Popular Mobilization Units units and in some cases teach the ideological concepts of the Islamic Republic of Iran, such as the velayat-e faqih (guardianship of the jurist), martyrdom, commitment to religious edicts (including those issued by Sistani) and the regional interests of the so-called "resistance" (the vision for the region espoused by the Iranian, Iraqi and Syrian governments as well as Lebanon’s Hezbollah movement). Thus, it is clear that the role of Shiite clerics in ideological indoctrination, including that of children, is an important shared aspect of the Popular Mobilization Units and the Basij.

While the Popular Mobilization Units are apparently emulating the Basij in its training of child soldiers, it should also take note of the consequences of such efforts and learn from Iran’s experiences. If not, Iraq may soon face yet another set of challenges.