The beheading of an Iranian fighter on the Syrian frontier is proving to be a watershed moment in the Iranian public’s view of the country’s military intervention in Syria. 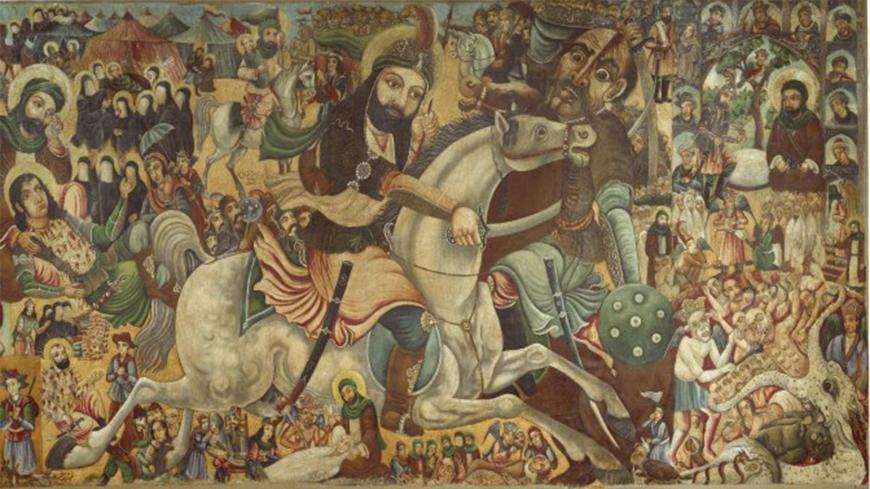 The battle on the Iraq-Syria border, near Tanf, on Aug. 6 was fierce. In brutal fighting, jihadis had killed everyone except for a young Iranian man. Mohsen Hojaji, a fighter from the Islamic Revolutionary Guards Corps (IRGC), was apprehended and marched across the battlefield with death pervading the air and smoke billowing all around him. With penetrating eyes, Hojaji showed no hint of fear. Shortly afterward, his severed head was placed on his abdomen, with three children — one looking barely 5 years old — stepping on his decapitated body and his head.

For almost six years, Iranian hard-liners promoting military intervention in Syria were desperately looking for a story like Hojaji’s. Their argument was that shoring up the defenses of their long-term ally — Syrian President Bashar al-Assad — would make Iran more secure. As such, Hojaji’s death was a gift from God to Maj. Gen. Qasem Soleimani, the shrewd and Machiavellian strategist in charge of the deployment of thousands of volunteers from across the Shiite world to Syria. "In order to glorify the significance of an issue, sometimes God creates an incident,” said Soleimani, nicknamed the “Living Martyr” in Iran. "Martyr Hojaji was for the glorification of the sacrifices of defending the [holy Shiite] shrines." Those who volunteer to fight in Syria have long been named “defenders of the shrine” in Iranian state discourse, referring to the Shiite shrine of Zeinab in southern Damascus.

Soleimani, a veteran of the 1980-88 Iran-Iraq War, knew the propaganda power of stories such as Hojaji’s in rallying the Iranian public and silencing the critics of the Islamic Republic's adventure in Syria. To have maximum impact, Hojaji’s beheading was embellished with Shiite iconography of the battle of Karbala in 680 in which Prophet Muhammad’s grandson Hussein ibn Ali, the third Shiite imam, was beheaded by the soldiers of an Umayyad caliph. In one such depiction, Hojaji is seen walking toward a headless man in white, presumably Hussein ibn Ali.

In power since 1979, Iranian leaders have realized that in order for their nascent Shiite republic to survive in a hostile, Sunni-dominated Middle East, they need strong propaganda tools that appeal directly to the emotions of the Shiite population at home. One such story is that of 13-year-old Hossein Fahmideh, who went to the front line to fight the invading Iraqi army in 1983. On the southern front, near the city of Khorramshahr where Iranians were struggling against the tide of Iraqi attacks, Fahmideh is said to have strapped several grenades around his body and blown himself up under an advancing Iraqi tank, thereby stopping the attack. Murals of Fahmideh appeared all over Iran. His story was turned into films and even included in the national curriculum. Generations of Iranians were brought up learning about Fahmideh’s sacrifice, inciting thousands of other children who flocked to the front line and were used by IRGC commanders in “human wave” attacks to stop Iraqi army advances. The war with Iraq was labeled the "Holy Defense."

But the grueling war with Iraq also taught the leadership in Tehran that it also needs regional allies to survive. As such, Iran established strong alliances with secular, Marxist-Leninist, Sunni fundamentalists and Shiite insurgent groups that survive to this day across the region. In the 1980s, when the whole Arab world and the West appeared to be colluding with the Saddam Hussein regime against Iran, the secular regime in Syria stood side by side with the clerics in Tehran. So when the Syrian regime faced an existential threat in late 2011, Iran did not hesitate to deploy its might to defend the Assad dynasty. But despite the deaths of hundreds of Iranian fighters in Syria, it took the beheading of Hojaji for an emotional cord to be struck with the public back in Iran.

Hojaji's death, like that of Fahmideh in 1983, appears to have had a similar electrifying effect on a large section of Iranian society — including the Reformist camp, which until recently was critical of Soleimani’s adventure in Syria. Murals of Hojaji have appeared across Iran, and a massive IRGC-led campaign has been initiated to elevate the martyrdom of Hojaji to that of Fahmideh and Hussein ibn Ali. The new generation of volunteers flocking to Syria are indistinguishable from their predecessors in the 1980s. Their commanders are none other than the IRGC veterans of the Iran-Iraq War.

"The martyrdom of Martyr Hojaji for me is reminiscent of the eight years of Holy Defense," said Mahdi Rashidzadeh, the man in charge of Hojaji's mourning procession in Tehran who believes that Iranian culture is rooted in the Battle of Karbala. "For this reason, our beloved people have managed to … relate to this martyr [Hojaji] and this kind of martyrdom and have created a movement of national unity."

To achieve this status for Hojaji, Soleimani did not shy away from backing a deal with the Islamic State (IS) to return Hojaji's body and also the bodies of several Lebanese soldiers in return for allowing the transfer of several hundred militants from Syria’s border with Lebanon to the Iraqi frontier.

As the US military has seemingly attempted to sabotage the IRGC-backed deal with IS, there is unprecedented preparation in Tehran for a long procession for Hojaji. Stories such as those of Fahmideh and Hojaji are often ignored outside Iran, and in particular in the West. But it is stories such as these that move the Iranian public and motivate its leaders, strengthening the sense of being under siege by hostile forces around the world.