How Iran's religious singers help frame the war in Syria

In addition to assuming more clout in Iranian politics, religious singers are expanding their presence on the battlefield in Syria. 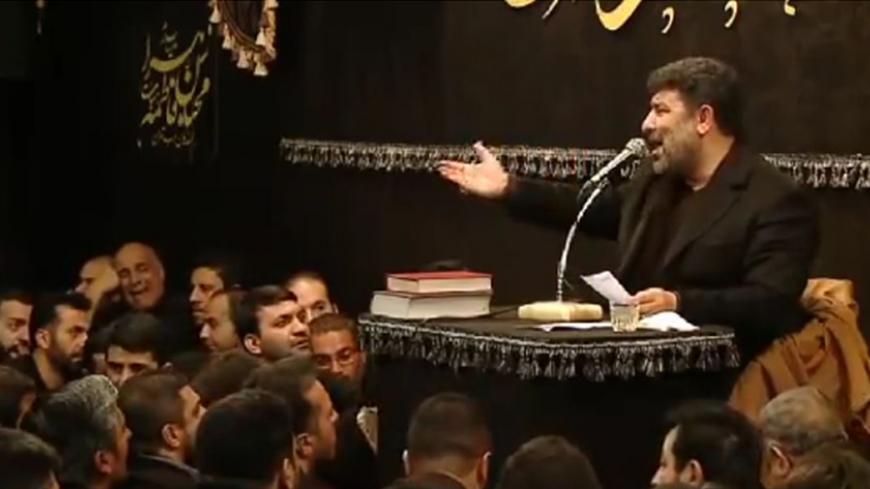 Religious singers, “maddahan,” occupy a unique place in Iran’s political landscape. They serve as eulogists and are called upon to perform at religious gatherings, such as those during the month of Muharram, when Shiite Muslims mourn the martyrdom of Hussein, their third imam and Prophet Muhammad’s grandson. Of interest, maddahan have increasingly become a powerful political class of their own, but their most recent endeavor could be their most vital for the Islamic Republic’s most pressing agenda — to deliver religious and spiritual motivation to the thousands of Shiite fighters sent to Syria.

According to Mohammad Farahani, head of the Basij Organization for Maddahan, many religious singers have requested to be sent to Syria to sing for the Shiite fighters. Farahani said that these singers have performed in Damascus at the Sayidda Zeinab Mosque, site of the interment of the daughter of the first Shiite imam, Ali, and at the Sayidda Ruqayyah Mosque, the site of the grave of Hussein's daughter. Farahani said the maddahan travel to Syria with the Islamic Revolutionary Guard Corps’ (IRGC) Quds Force, which is in charge of foreign operations, most notably in Iraq, Syria and Lebanon.

Farahani contends that the presence of the religious singers and the ceremonies they perform give fighters “strength and motivation,” increasing their “fighting spirit.” The audiences for whom the maddahan perform are not passive participants. Oftentimes, the men will beat their chests, chant in unison or move rhythmically at the instruction of the singers. Depending on the type of performance, singers might select upbeat songs, creating the ecstatic environment one might find at a rave (but without drugs and glow sticks). A video of the prominent religious singer Saeed Haddadian in Syria highlights a mildly upbeat performance. The title of the video is “Saeed Haddadian, Two Nights Before an Operation in Aleppo, Among the Defenders of the Shrines of Islam.” Not all maddahan have joined the war effort. Many more traditional singers are strictly known for their work and videos during Muharram.

The use of maddahan by Iran to boost the morale of fighters makes sense given how Tehran has framed its war effort in Syria. The geopolitical rationale for its defense of Syrian President Bashar al-Assad has been well covered. Not only has Syria been the Islamic Republic’s longest Arab ally, but it has also been Iran’s corridor to the Hezbollah movement in Lebanon. Regardless of such reasons, Iran’s war effort in Syria has, without a doubt, also been couched in religious terms. After all, making the case for supporting the Syrian government because three decades ago it was the only Arab country to support Iran during the 1980-88 war with Iraq is a tough sell and probably poor propaganda.

Thus, it should come as no surprise that Iran, a predominately Shiite nation, has chosen to frame the Syrian war in religious terms and a Shiite one at that. Iranian and other Shiite fighters in Syria are referred to as “defenders of the shrine,” in particular the Sayidda Zeinab Mosque. For Shiites, the shrines of Prophet Muhammad’s Household (that is, his family, Ahl al-Bayt in Arabic) have significant religious and political importance, much to the dislike of Sunni Islamists, who often vow to destroy these sites. Indeed, Iranian fighters who are killed in Syria are referred to as “martyrs” and receive the same honors as those killed in the Iran-Iraq War, one of the bloodiest wars of the 20th century and one that continues to influence Iran’s domestic politics nearly 30 years later.

The concept of sending performers to boost the morale of troops stationed abroad is not unique to Iran. For example, the United Service Organization was founded in 1941 to boost morale for American troops abroad. It has deployed entertainers like Bob Hope in World War II and Stephen Colbert in Iraq in 2010. Light-hearted humor delivered by comedians would certainly clash with the objectives of an Islamic Republic in a religiously charged civil war. Rather, many fighters are likely seeking religious affirmation of the grinding war they are engaged in thousand of miles from home.

Iranian religious singers' recounting of tales of sacrifice and the martyrdom of Prophet Muhammad’s Household fit nicely into Iran’s warnings about what will happen if the Syrian government collapses: primarily that Sunni Islamists will exterminate Shiites, Alawites and other minorities and flatten the shrines of Sayyida Zeinab and Sayyida Ruqayyah. When speaking with Al-Monitor, Farahani referred to Syrian opposition fighters as “takfiris” — Muslims who consider other Muslims to be apostates — and said that he believes the maddahan will have a “positive impact in the jihad” against them.

Farahani also said that religious singers' efforts in Syria have been voluntary. This may be true in that no one is forcing them to go, but the highest authority in Iran, the supreme leader, Ayatollah Ali Khamenei, has explicitly encouraged them to play a larger role in both Syria and in Iran. “That maddahan sing for the defenders of the shrine is very valuable, there is no doubt about this,” said Khamenei on March 30 in a speech to religious singers. “In addition to this, there is more important work, and it is to reinforce the beliefs of the youth. The enemy is working against a belief in Islam, belief in the effectiveness of an Islamic system, and belief in the continuation of an Islamic system.”

Not only has Khamenei endorsed the work of religious singers, he has also shown himself to be personally moved by them. In a viral 2015 video, Khamenei, along with Quds Force commander Qasem Soleimani, is seen being moved to tears while listening to the famous singer Sadegh Ahangaran. The performance by Ahangaran — who made a name for himself singing religious songs to boost the morale of Iranian soldiers during the Iran-Iraq War — was for IRGC commanders.

When Haddadian traveled to Syria in January, it took Iranian media by surprise. He was not the first religious singer to travel to Syria, but pictures of him wearing military fatigues and videos of him performing for fighters ushered in a new era for the maddahan. With their political clout rising, and no end in sight to the Syrian civil war, it seems that they will continue to play an increasing role in the war effort for Iran.