Why religious singers are gaining power in Iran

Eulogists or religious singers are the latest actors to gain prominence on Iran’s ever more crowded political stage. 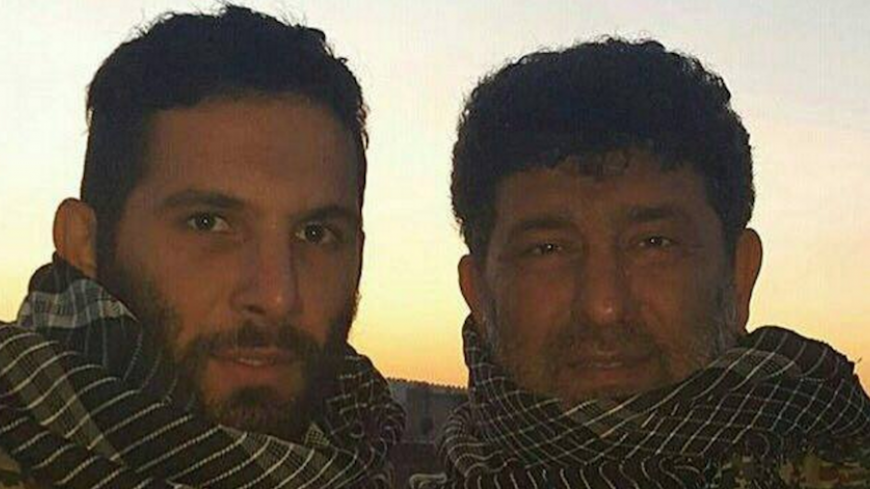 Iranian religious singer Saeed Haddadian, one of the most prominent eulogists in Tehran, and his son in Syria. - FACEBOOK/Persian War News

The diversity of actors on Iran’s political stage has made the political process in the country complex. The “maddahan” (“madah,” singular), religious singers or eulogists, are one group relatively new to the scene.

A decade ago, maddahan were visible mainly in mosques and during such holidays as the 10-day mourning ceremonies in the month of Muharram, when Shiite Muslims commemorate the martyrdom of Prophet Muhammad’s grandson Hussein ibn Ali and his companions in the 680 Battle of Karbala. In recent years, however, eulogists have become more influential and now even play a role in politics. Indeed, whereas they previously only attended mourning ceremonies, they are now present on virtually all religious occasions, including festivities, and often comment on various issues, such as observance of the hijab, social mores, whether to hold concerts and sports competitions, the economy and even foreign policy.

Mostafa Khorsandi, the head of Kanoon-e Maddahan, the eulogists' union, has said, “In [the Iranian year] 1393 [March 21, 2014-March 20, 2015], there were about 56,400 male eulogists in the country. Perhaps only a few of these are well known and controversial. The remainder lead normal lives and are only active in their local mosque or prayer halls during the mourning season.”

Although few in number, maddahan are gaining in prominence on the political stage. In general, eulogists face relatively fewer political restrictions, falling somewhere between a cleric and a politician. On the one hand, they enjoy the power that clerics derive from people’s religious faith, while on the other hand, they are able to deliver political sermons from their tribunes between eulogies. Given the vast number of Iranians who attend mourning ceremonies during Muharram, these sermons can have a considerable impact.

Eulogists began to gradually gain power after Mahmoud Ahmadinejad assumed the presidency in 2005, but they eventually came to oppose Ahmadinejad. They severely criticized him for his persistent support of his chief of staff, Esfandiar Rahim Mashaei, whom they accused of having a “deviant” approach to Islam and was not well liked by the supreme leader, Ayatollah Ali Khamenei.

Saeed Haddadian, one of the most prominent eulogists in Tehran, is widely known for voicing radical political positions at ceremonies where he eulogizes. In an unprecedented ceremony in August 2010, he likened Mashaei to Ahmadinejad’s genitals after Khamenei had attacked Mashaei. Haddadian was fined 500,000 rials ($16) for making the remark, though in a later interview with Khabar Online, he claimed to have been fined and to have paid a 4.05 million rial ($128) penalty.

Mansour Arzi is another well-known eulogist. He came to prominence for his harsh attacks against President Ali Akbar Hashemi Rafsanjani, who held office in 1989-1997. Arzi was initially an Ahmadinejad supporter but gradually turned into one of his harshest critics. At a ceremony in summer 2013, at the end of Ahmadinejad’s tenure, during Ramadan, Arzi criticized the president’s performance, saying, “Why don’t you say what you have done for the people’s faith? Why don’t you give a report about what you have done in these eight years to establish [further observance of the] Islamic hijab? If you are neglectful of people’s religion and their values, whatever you do for the economy will be worthless, and there will be no bliss in anything.”

When Hassan Rouhani became president in August 2013, the maddahan sharpened their criticisms, going so far as to comment on the nuclear negotiations. At a religious ceremony in September 2015, when the parliament was about to review the Joint Comprehensive Plan of Action (JCPOA), Arzi severely criticized the landmark nuclear deal, saying, “What do you now know of the JCPOA, [an agreement] that is the same as the ‘poison chalice’ [a metaphor used by Ayatollah Ruhollah Khomeini's agreeing to end the war with Iraq in 1988]? I warn the people’s representatives in parliament, since we no longer have hope in anyone, to be careful. There is a Judgment Day: Don’t be fooled. The reality is that this issue [the nuclear deal] is a compromise with the enemy. … Pray for these members of parliament so that they act wisely. If these lawmakers make a mistake, they will take everyone to hell, and no one can do anything [about it].”

Such statements have elicited forceful responses. Grand Ayatollah Naser Makarem Shirazi has on several occasions strongly criticized the eulogists. On Oct. 5, he said, “Eulogists should refrain from mixing [commemoration] ceremonies for Imam Hussein with political [and] factional issues. It is not worthy of them to contaminate themselves with factional politics.”

Khamenei has also criticized the eulogists. At a speech in April 2015, Khamenei bristled at what he called seditious words that will create division among Shiites and Sunnis and also over how some eulogists get youths so worked up during mourning ceremonies that they begin jumping up and down and tear their clothes off, which according to the supreme leader is contrary to the sanctity of these events. At another speech in June 2014, Khamenei said, “I don’t agree with violating or vilifying someone from the eulogy tribune, and I don’t like this.”

This is far from all the criticism that the maddahan have faced. Reports of some of them receiving huge compensation for participating in religious ceremonies have also sparked widespread controversy. Hossein, a journalist who runs a religious association in the Shahr Rey neighborhood in southern Tehran, told Al-Monitor, “The average salary of the more prominent eulogists for the first 10 days of Muharram is about $7,000 per night. Of course, some even receive up to $12,000 a night.” These are incredible figures in a country where the average monthly salary for a worker, according to the Labor Ministry, is about $230 dollars per month.

That is not all. On Oct. 5, leaked photos of 200 million rial ($6,313) checks made out to four prominent eulogists — Haddadian, Abdolreza Helali, Mahmoud Karimi and Mohammad Reza Taheri — caused a new wave of debate. Given that the checks were issued by Shahr Bank, which is affiliated with the Tehran municipality, some have described them as gifts from Tehran Mayor Mohammad Qalibaf. Qalibaf has rejected the allegations.

At a ceremony on Oct. 8, the sixth day of Muharram, Haddadian denied receiving any checks, saying, “It is true that our monthly salaries don’t reach 4 million tomans [$1,262] but our credit is much more than this.” As usual, he was not just satisfied with eulogizing Imam Hussein during the ceremony but also pondered aloud about celebrations at the Iran-South Korea soccer match taking place on the night of Oct. 11, Tasua, an important part of the Muharram mourning ceremonies.

Without doubt, the eulogists — one of whom is known to have pulled a gun in the middle of a Tehran highway after a traffic accident, and others have talked about presenting a list of independent candidates for parliamentary elections — are now key players on Iran’s political stage.