As a new generation of right-wing conservatives emerges in Iran, well-known cleric Alireza Panahian is upping his game as a vocal critic of Reformists and moderates. 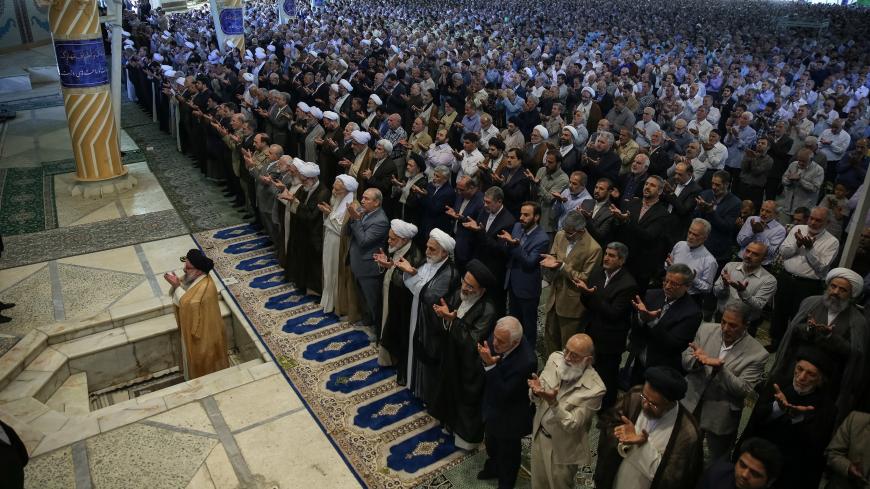 In Iran, when the fall months of Muharram and Safar arrive, people hold ceremonies to pay homage to the decedents of the Prophet Muhammad, especially his grandson Imam Hussein ibn Ali and a number of other Shiite imams. These months, which roughly correspond with September and October, are sacred for Shiites.

But the mourning ceremonies have become opportunities for hard-liners to advance their political agenda. Eulogists, or religious singers, are paid huge amounts of money, and the practice has drawn public scrutiny.

The hard-line eulogists and speakers in the mourning ceremonies have been used in the past two decades to attack the Reformists and moderates, a move employed by Mahmoud Ahmadinejad during his presidency, from 2005 to 2013. However, as the proverb says, “You reap what you sow.”

Following a serious falling out with hard-liners and conservatives in his second term, Ahmadinejad came under fire from the same eulogists and speakers who were empowered by his own government. The same wave of verbal strikes during the mourning ceremonies have been repeated again and again against moderate President Hassan Rouhani, who came to office in 2013.

A number of clerics such as Ayatollah Naser Makarem Shirazi and Ayatollah Seyyed Javad Alavi Boroujerdi have called on those holding the mourning ceremonies to keep their distance from politics.

“The [ceremonies] should be independent and [they] shouldn’t be like a political party. [The issue of] who wants to become the president or who wants to become a member of parliament has nothing to do with [mourning ceremonies]. The [ceremony] of Imam Hussein is not to be used as a tool for attacking or [supporting] anyone,” Ayatollah Boroujerdi said in a video posted Sept. 26 on his Instagram page.

Meanwhile, a video of hard-line cleric Alireza Panahian went viral in September, in which he attacked parliament harshly and questioned why moderates and Reformists reject a bill that would disclose their voting records in parliament. Reformist parliamentarians seem concerned that their voting on various issues coming under the spotlight would limit their freedom, as it could lead to their possible disqualification by the hard-line-dominated Guardian Council. The council is tasked with vetting candidates for the parliamentary election in 2020.

A few days after the video appeared, something unusual happened during Tehran’s Friday prayer sermon Sept. 13. Panahian censured and cursed Rouhani for expressing his sorrow over the death of a female fan of Iran’s Esteghlal soccer team, who had set herself on fire after her trial for attending a soccer match.

Who is Panahian and what is he planning?

Born in Tehran in 1965, Panahian is a mid-ranking cleric and a student of hard-line spiritual leader Ayatollah Mohammad Taghi Mesbah Yazdi, who was described during Ahmadinejad’s presidency as his spiritual mentor. Along with Mesbah Yazdi and his entourage, Panahian became renowned, with the help of Ahmadinejad’s administration in the 2000s.

When Mesbah Yazdi helped form the hard-line Endurance Front to counter Reformists and Ahmadinejad’s team in 2011, Panahian was among the main pillars of the group, which is now the symbol of extremism in Iran. In the same year, Panahian was named deputy head of the “Ammar cultural base,” which was formed to develop cultural activities in society based on the groups’ thoughts and also to deal with moderates inside the conservatives’ camp.

Moreover, Panahian has also developed his own activities, establishing a seminary and a high school to nurture a new generation of students based on his worldview — a scheme to increase his influence among the new generation.

Noting that the public and the new generation of hard-liners is fed up with the old guard, Panahian is apparently taking advantage of this opportunity to portray himself as one of their potential leaders.

Sadegh Zibakalam, a political science professor at the University of Tehran, told the Islamic Republic News Agency Sept. 16, “Mr. Panahian … wants to say, ‘Hey! We have nothing to do with the [conservatives] you hate. … We are a new and independent current.’”

In the months ahead of the February parliamentary election, no doubt we will hear more from Panahian and his possible role in the hard-liners’ and conservatives’ camps.