Iran mourns general killed by IS in Iraq 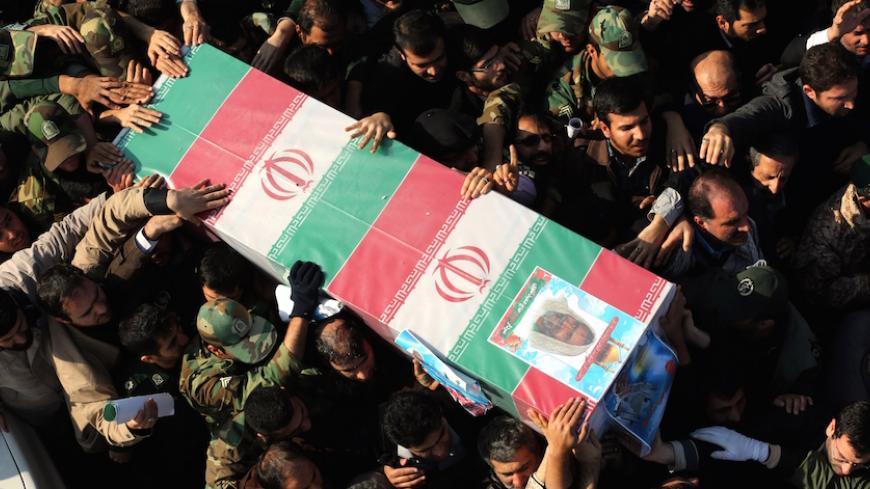 Iranians carry the coffin of Gen. Hamid Taghavi, a commander of the Revolutionary Guard Corps reportedly killed in the Iraqi city of Samarra, during his funeral in Tehran, Dec. 29, 2014. - AFP/GETTY IMAGES/Atta Kenare
Arash Karami
@@thekarami
December 31, 2014

“Bury me next to my grandfather; I do not want a part of the martyr’s section for myself,” wrote Gen. Hamid Taghavi in his will. A veteran of the Iran-Iraq war, Taghavi had assumed his fate would be different from that of his brother and father, who were both killed in battle during that war.

But when Islamic State (IS) terrorists took over parts of Iraq this summer, destroying Shiite shrines and threatening to march on to Baghdad, Taghavi came out of retirement to work as an adviser to the Iraqi army, which was in retreat. He was killed by a sniper north of Baghdad in the city of Samarra, home of the al-Askari shrine.

The Islamic Revolutionary Guard Corps (IRGC) announced Taghavi’s death in Dec. 28 statement that read Taghavi “was martyred during his mission advising the Iraqi army and people’s forces to fight takfiri terrorists and [IS] in the city of Samarra near the shrine of Imam Askari.”

Before burying him in his hometown at the cemetery for martyrs in Ahvaz, the IRGC held a ceremony at its headquarters in Tehran for Taghavi’s funeral, which thousands attended. The head of Iran’s Quds Force, Qassem Soleimani, attended the funeral and IRGC head Mohammad Ali Jaffari sent a letter of condolence and praise.

At the funeral, Ali Shamkhani, secretary of Iran’s Supreme National Security Council, echoed Iran’s position on its presence in Iraq: “If the Taghavis don’t give their blood in Samara, we will have to shed blood in Sistan, Azarbaijan, Shiraz and Esfahan.”

Taghavi was part of the IRGC's Ramadan Division during the Iran-Iraq war. Specialized in irregular warfare and intelligence, the division also helped train Iraqi forces opposed to former President Saddam Hussein. An ethnic Arab and fluent in Arabic, Taghavi was well suited to his role. According to those who had served with him, he spent a considerable part of his time inside Iraqi territory during the war gathering intelligence.

A number of Iranian news sites shared a short video made by an Iraqi Basij force in honor of Taghavi. The footage shows Taghavi talking to Iraqis and working with Iraqi forces. In one odd instance, during a firefight while the rest of the soldiers lay flat on the ground, Taghavi is shown standing and walking, studying the scene.

After the burial, Gen. Iraj Masjedi said Taghavi “played an important role driving out the enemy from the Islamic Republic’s borders to behind the Tigris River.” Masjedi said that Taghavi advised Iraqi troops both in the liberation of Jurf al-Sakhar in late October and in securing roads going through Baghdad and Karbala.

Masjedi said that Taghavi “was a brave battle commander, an intelligence specialist and an expert in organizing people’s and tribal forces.” He added, “No one could do what he did.”