Amid accusations of affiliation with the Islamic State and an uncompleted demining process in the liberated areas, most of Iraq's displaced have yet to return to their cities. 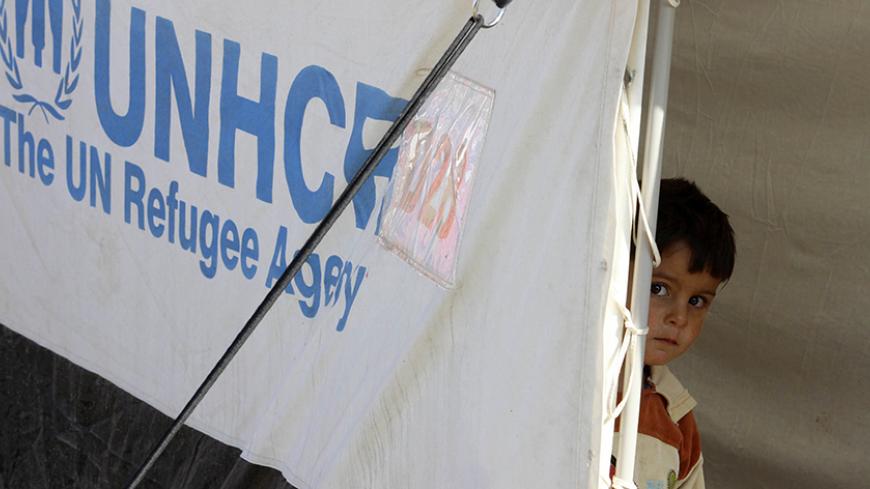 A displaced boy who fled from Salahuddin province stands in a tent at a refugee camp on the outskirts of Kirkuk, Dec. 17, 2014. - REUTERS/Ako Rasheed

SULAIMANIYAH, Iraq — Some Iraqis displaced from Tikrit returned June 15 in a positive sign for the struggle against the Islamic State (IS). A true victory will see not only the land freed, but also its residents returned and restored to normal life.

However, the return of these people is still in its initial stages and other areas' residents are awaiting action by the government and the security forces. These areas include Jurf al-Sakhar to the south of Baghdad — renamed Jurf al-Nasr after being freed from IS in October 2014 — and the towns of Jalula and Saadiya, as well as a number of regions such as Salahuddin and Albu-Ajeel.

The Popular Mobilization Units and government officials give similar reasons for the delayed return of the displaced to the liberated areas. These include the time needed to demine the areas, dismantle booby-traps in houses, restore services and address the effects of war, in addition to the tribal feuds and security considerations that prevent the return of some families suspected of association with IS. All of these reasons are valid in areas that are ethnically and religiously mixed like Jalula and Saadiya, or where there are tribal rivalries such as parts of Salahuddin.

Sheikh Abdul Hamid al-Jabouri, one of the elders of al-Alam, a district liberated from IS in March, told Al-Monitor that it is impossible for some families with members affiliated with IS to return to al-Alam.

Jabouri explained that the delay “is related to tribal feuds, even within the same tribe. The families whose members are involved in murders were prevented from returning, but this was not a punishment for crimes committed by their members. Some tribes refused to let the families return to protect them from tribal feuds, so as not to implicate their innocent members in the tribal conflicts they will encounter upon their return.”

However, this scenario is not always the case. Al-Monitor met with people who had been displaced from the towns of al-Alam, al-Dor and Tikrit in Salahuddin governorate who refuse to return for other reasons. Samer al-Douri, a civil engineer from al-Dawr who was displaced to the city of Sulaimaniyah, said that returning to al-Dawr is now impossible in light of the Popular Mobilization Units imposing their control over the areas that were recently liberated.

He added, “We will not be safe even though we ran away from al-Dawr when IS invaded it. The government and the Popular Mobilization Units still deny the return of our families.”

Iqbal al-Ojaili, who was displaced with her family from Tikrit to Sulaimaniyah, told Al-Monitor, “I refuse to return at the government's discretion. I have three boys and their lives are in the hands of a security member. If the latter decides that they are terrorists, it will be over for them.”

Ali Issam, who also fled to Sulaimaniyah, told Al-Monitor that his house in Tikrit had been completely looted. He owned a food store that was burned to the ground. “How do I get back, and where and how will I live?” Issam asked.

Al-Monitor spoke to the deputy governor of Tikrit, Ammar Hikmat, who is directly responsible for the return process to the city. He said that the people of Tikrit are subject to intimidation by rumor spreaders and the media to prevent them from returning.

He said, “On Monday [June 15], we launched the plan for the return of the displaced to Tikrit. The basic plan requires all displaced families to submit to the administrative officer of Tikrit a request that will be submitted to a security and intelligence committee formed for this purpose. Before setting a date for the return, the committee will check the family members’ names against a list of those wanted for affiliation with IS.”

Hikmat added, “This course was followed, but the very next day, we were surprised by hundreds of families flowing to Tikrit from Samarra, Kirkuk and Baghdad, and we were forced to forego the previous mechanism and check the names directly at checkpoints.”

He added, “We only have 500 families that are banned from returning. The families that want to return will not be subject to any kind of prosecution. Indeed, within only five days, nearly 600 families have returned and we expect this number to double in the coming period.”

Slow restoration of destroyed infrastructure, including electricity networks and state services, and the need to prioritize certain reconstruction operations — especially the city’s two hospitals, the Tikrit Hospital and the military hospital — are all hurdles to the return process. According to Hikmat, the government has not disbursed the funds needed for the rehabilitation of the city. “Help from the international and regional aid programs is also urgently needed,” he added.

Hikmat believes the experience of Tikrit will be followed by the return of displaced families to al-Dawr and Albu-Ajeel, which are still closed for security reasons. He denies that any kind of demographic change can be expected in Tikrit and other areas when asked about the concerns expressed by Deputy Prime Minister Saleh al-Mutlaq during Tikrit’s liberation in March.

Mutlaq’s concerns are justified, especially since the Babil governorate continues to deny the return of the people who fled from Jurf al-Sakhar more than eight months after its full liberation. According to the residents of Jurf al-Sakhar, the governor of Babil is being unreasonable in insisting that the region has not yet been cleansed of mines and booby-traps.

Sheikh Hatem al-Janabi, a prominent community figure from Jurf al-Sakhar who fled to Erbil, strongly denied this allegation. He confirmed that the region has been cleansed of ​​traps. He told Al-Monitor, “Preventing the return of the displaced is associated with a lack of trust in the residents, as Jurf al-Sakhar consists of a vast agricultural area and not of residential neighborhoods. Depopulating this region is kind of a demographic change.”

Janabi said that the Jurf al-Sakhar residents are prevented from returning for allegedly hosting IS members. Jurf al-Sakhar is particularly sensitive, located near the city of Karbala, where holy Shiite shrines are located.

Regardless of the mutual accusations, it remains true that a victory over IS in the liberated areas will only be fully achieved after the return of their residents. Tikrit seems to have fully vanquished IS, while the battle is still unresolved in Jurf al-Sakhar and in the regions whose displaced residents have yet to return.