Iraq is working on closing all displacement camps this year and to return the displaced people to their homelands. 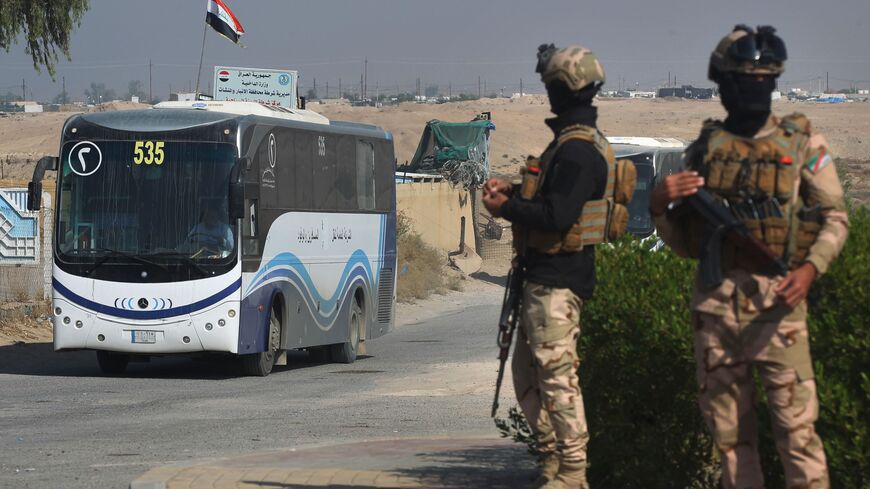 Iraqi soldiers secure buses transporting displaced families from the displaced persons camp in Habbaniyah in Iraq's Anbar province on Nov. 10, 2020. After five years hosting displaced Iraqis, the vast camp was emptied in under 48 hours. The Habbaniyah Tourist Camp, a former luxury resort used to house Iraqis fleeing the Islamic State group, closed this week as part of a sudden government push to shutter dozens of displacement camps as soon as possible. - AHMAD AL-RUBAYE/AFP via Getty Images

As the holy month of Ramadan starts, and the hot summer weather is just around the corner, the Iraqi government is putting the final touches on the issue of closing displacement camps in a number of Iraqi provinces. However, some obstacles have been impeding this goal, which Prime Minister Mustafa al-Kadhimi included in his government platform and promised to achieve.

On April 11, the Ministry of Immigration and Displacement held a conference on facilitating the return of the displaced to their homes called “Our Displaced: Challenge and Achievement.”

Evan Faiq, the minister of migration and displacement, said in a statement opening the conference, "The government’s measures to accelerate and facilitate the return include “providing income-generating projects, especially for families headed by widowed women, in addition to coordinating with the concerned authorities and international organizations regarding rebuilding and restoring destroyed homes and advancing services and the urban reality in the liberated areas.” He added, “It is time for the displaced to return to their areas of origin.”

In June 2014, Iraq experienced a large wave of migration and internal displacement after the Islamic State (IS) seized about a third of the area of Iraq, forcing over 6 million people to flee their homes and communities.

The war the Iraqi security forces fought with the help of the US-led International Coalition to rescue large parts of Ninevah, Salahuddin and Anbar provinces from IS resulted in great destruction, which increased the waves of displacement.

During his visit to Ninevah in June 2020, Kadhimi pledged to find a “comprehensive solution” to the problem of the displaced and end their suffering.

The Ministry of Migration and Displacement told Al-Monitor in a written statement, “There are now 28 camps for the displaced in Iraq, most of them are in the Kurdistan Regional Government (KRG).”

The majority of displacement camps are located in the cities of the autonomous KRG, but there are also camps in the provinces of Ninevah and Anbar, which makes it more difficult for the Iraqi government to deal with the return of the displaced to their areas.

The government faces the problem of closing the Al-Jada’a camp in Ninevah, “which is inhabited by 7,477 displaced persons,” according to the Ministry of Migration and Displacement.

Anas al-Azzawi, a member of the Office of the High Commissioner for Human Rights, told Al-Monitor, “Most of the families residing in Al-Jada’a camp have members who were involved with IS.”

Azzawi added, “Residents of the city of Mosul are refusing to receive these families,” saying, “There is fear for their future if the camp is closed.”

The ministry defines programs to deal with each camp separately, according to its residents, the conditions within their communities and the nature of the areas from which they originate.

The ministry is working with local governments in the provinces to coordinate the return of displaced persons to their areas, in addition to stressing that the return is voluntary, saying, “The return (of the displaced) is optional and not compulsory.”

In fact, the ministry succeeded in closing 47 camps for the displaced across all provinces of Iraq, which enabled 66,000 families to return to their home areas.

However, Azzawi pointed out “mistakes” in closing some of those camps, saying the Office of the High Commissioner for Human Rights “discovered a reverse migration to the KRG after the camps were closed.”

He added, “Some families left the displacement camps while their conditions were not completely settled,” citing an example of families who have members in IS and have been subjected to harassment in their areas of residence, in addition to families who did not receive benefits because they had no official documents, while other families had to return to cities that had not been rebuilt.

The ministry seems to be taking its time before shutting down the remaining displacement camps until a solution for the displaced families in the Arab regions is reached, especially since most of these displaced 0people have special circumstances.

In its statement to Al-Monitor, the ministry denied setting a specific date for closing the camps. This includes the Al-Jada’a camp in Ninevah due to its sensitivity. The ministry said that closing the camps will only take place with the displaced people’s desire to return, in coordination with international organizations, while eliminating challenges facing their return, rehabilitating their homes, attempting to achieve societal reconciliation and offering grants to the displaced.

Belkis Wille, a senior researcher with the Conflict and Crisis division at Human Rights Watch, told Al-Monitor she understands the government's intent to return displaced Iraqis to their areas.

However, having worked for many years on the Iraq file at Human Rights Watch, she linked the safe return of displaced persons to taking into account their sensitive conditions and providing them with all humanitarian and security needs.

Shutting down the remaining displacement camps in Iraq requires more focus from the government, as well as financial allocations, but Wille believes it is not an impossible task as long as clear programs and plans are set.