Many young people from Jurf al-Sakhar in Iraq are volunteering to join the Islamic State (IS) to secure a monthly income. 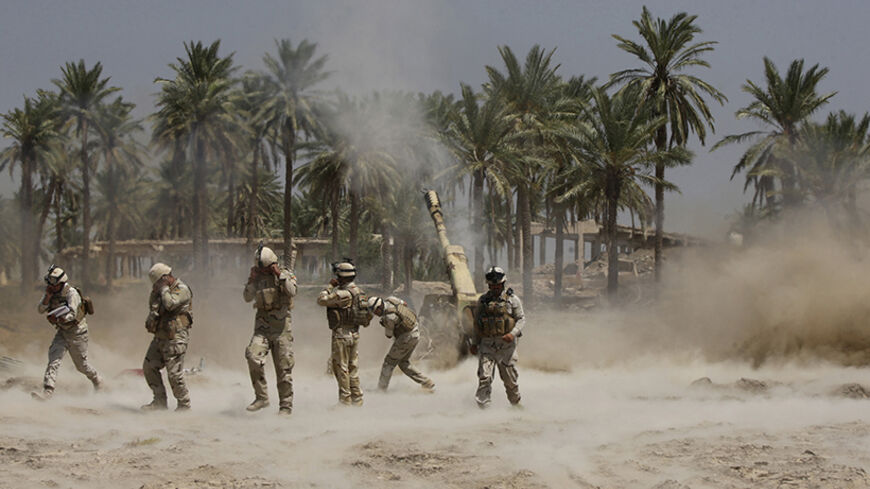 Since 2003, Jurf al-Sakhar (60 kilometers, or about 37 miles, southwest of Baghdad) has been a city whose people volunteer in the Iraqi army, join the Sahwa security forces, conduct bombings or join armed groups, most recently the Islamic State (IS).

Imad Farouq, 22, told Al-Monitor about the region’s population: “The people have been loyal to two contradictory sides, but recently, they are tending toward joining IS.” Farouq quit the government’s Sahwa forces and fled to Latifiyah, south of Baghdad, because he fears, “like many others, the tyranny of IS, which has the support of some in the region for ideological reasons.”

Farouq said, “The main reason why some young people are attracted to IS is because they are looking for jobs and it is easy to join it. IS has opened the door for Sunnis in the area that stretches from southern Baghdad to the outskirts of the city of Fallujah, by providing a good salary.”

Fakher al-Jubouri, a young man from al-Haswah (40 kilometers, or about 25 miles, north of Hillah in Babil province), told Al-Monitor, “Many young people either join the security forces or the armed groups for the purpose of obtaining a monthly income.”

Working in the army or the security forces requires a daily work routine, while working with the armed groups is intermittent. “A young man is told to plant an explosive device at a certain place or carry out a night attack on the region’s residents to kill or displace them,” Jubouri said, according to information he got from a young man who was part of IS.

“But things changed since the fall of Fallujah, as more young people joined IS. [Since then,] their duties have become daily and only about combat. [In return, they get] a monthly income of $400 to $500, but it is intermittent and not stable.”

In an interview with Al-Monitor, social researcher Qasim Muhammad said, “Ideological motivation is present among these young men, who are Sunnis and believe that these armed organizations represent them and save them from the sectarian persecution that they believe exists.”

Muhammad said, “Jurf al-Sakhar is a natural extension of the Baghdad belt area and of the triangle of death established after 2003, which was the scene of forced displacement and murder based on [sectarian] identity.”

Army Capt. Fadel Abbas of Babil told Al-Monitor, “One of the reasons why this area has remained turbulent is because it is a large area running from the edges of the Baghdad belt to the deserts next to Fallujah in the province of Ramadi. … The security forces don’t control this region because some of its inhabitants protect the gunmen, while armed groups can easily move into it from Anbar province. The gunmen have used the dense orchards and farms in the region to store weapons, spread and increase the number of sleeper cells. When the security forces come, the area seems quiet because the armed groups avoid confrontation. But when [the security forces] leave and set up checkpoints, the gunmen start conducting attacks.”

Ali al-Sultani is a volunteer in the pro-army popular forces that are stationed in Jurf al-Sakhar areas. He told Al-Monitor, “In the daytime, the Iraqi army, the security forces and the volunteers control the region, but they get shelled with mortars hidden in farms and orchards. At night, the armed groups use the darkness to surprise the army.”

Suhaila Abbas, a member of the Babil province council, said in an interview with Al-Monitor, “Since 2003, the terrorists have considered this region vital for them since many Sunnis live in it, making the villages of al-Furusiyya, al-Hujair, Hur Hussein and al-Fadiliyah areas a hotbed of these groups. They threaten the population with murder and displacement if they don’t cooperate with them.”

Haj Tawfiq Rasn, who was displaced from the city of Hillah, confirmed this. He told Al-Monitor, “The people of the region are caught between the hammer of the army and the anvil of the armed groups,” saying, “Many have been forced to flee from their homes and farms.”