Islamic State in Iraq is not over yet

Several terrorist attacks have occurred over the last several days across Iraq, raising concerns over a resurgence of the Islamic State. 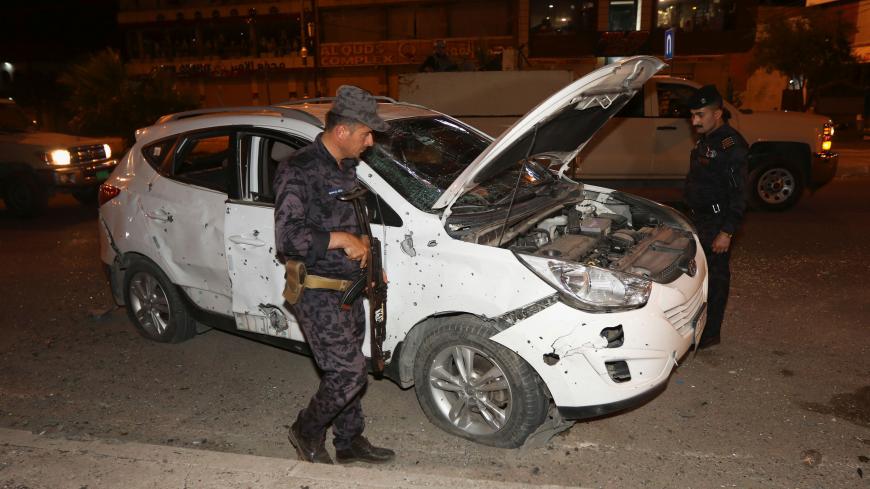 Iraqi security forces inspect the site of a bomb attack in Kirkuk, Iraq, May 31, 2019. - REUTERS/Ako Rasheed

Several terrorist attacks occurred across Iraq during Eid al-Fitr celebrations, raising concerns of a resurgence of the Islamic State (IS).

IS set a trap for soldiers in the Iraqi army in Tarmiya in northwest Baghdad on June 4, killing seven soldiers and officers and injuring at least 21 others. The attack targeted the Commando Battalion of the Baghdad Operations Command, which went to the area after receiving fake reports from residents who claimed they drove over an explosive device that blew up. The soldiers were then targeted by IS snipers as soon as they got to the area; no IS members were captured.

In his speech after the Eid al-Fitr prayer, Asaib Ahl al-Haq's General Secretary Qais al-Khazali called on Iraqi Prime Minister Adel Abdul Mahdi to address the urgent situation in Tarmiya, saying "IS has not left Tarmiya at all." He said IS has safe havens there, urging Abdul Mahdi to undertake cleansing operations in the area.

Another attack targeted members of the Popular Mobilization Units (PMU) in Jurf al-Sakhar in southern Baghdad on the same day of the Tarmiya incident — the same area saw another attack May 31 that killed some members of the PMU and injured others. Local authorities pointed out that “the number of IS militants was significant.”

The Reconnaissance Regiment of the 7th Division, supported by military intelligence, surrounded on June 5 a group of IS militants hiding in a cave near Ramadi. After exchanging fire, the Iraqi air force ended the battle with an airstrike, killing seven militants. A large number of explosive belts and weapons were found in the cave. On the same day, joint PMU and Iraqi army forces killed three IS militants near Lake Milh in southern Anbar.

In another incident, six explosive devices struck Kirkuk May 30, killing five and injuring 18.

Following the Kirkuk attacks, Reuters reported that a group of IS militants managed to reorganize themselves in the Hamrin Mountains that stretch from Diyala province bordering Iran, northwest to the Tigris river, crossing northern Salahuddin province and southern Kirkuk province.

The decline in security led prominent Shiite cleric Muqtada al-Sadr to warn the Iraqi government and demand prompt action — that, or allow his military faction, Saraya al-Salam, to find a solution to the problem.

In the same context, Deputy Speaker of parliament Hassan Karim al-Kaabi said in a statement June 4, "The targeting of the Iraqi army in the Tarmiya area and IS's attempt to undertake terrorist attacks in Jurf al-Sakhar, Qaim and other areas require urgent and practical actions from all, especially the three presidencies and the senior security authorities, in order to deter terrorism and hold the [security authorities who failed to undertake their duties correctly] accountable."

“We called previously, following the Kirkuk incident, for taking the highest level of precautions, reviewing the security plans and undertaking proactive operations against IS sleeper cells,” he added. Kaabi also called upon Iraqi armed forces Commander-in-Chief Abdul Mahdi to have Intelligence services undertake a bigger role in confronting IS by discovering and preventing their plans in advance in the cities and towns within the Baghdad belt and its surroundings; tightening security measures in areas where frequent security breaches in the capital and other provinces occur; and fortifying Iraq's border with Saudi Arabia, Jordan and Syria — which IS often use to escape or transfer fighters and weapons — in cooperation with the air force.

Warnings about the return of IS are not exclusive to Iraqi authorities. During his talk on June 4 at the Middle East Institute in Washington, Special Representative for Syria Engagement and Special Envoy for the Global Coalition to Defeat ISIS Ambassador James Jeffrey said, “It is not over yet. … There are tens of thousands of sleeper cells in Iraq and Syria.”

He added, “There is no timeline for the enduring defeat of IS. … It is an ongoing thing, and there is always a risk the cells will reemerge,” noting that dealing with terrorism is a long-term issue everywhere and citing as an example Germany, where “it took four decades to declare the relatively small Baader–Meinhof Group terrorist movement over.”

IS leader Abu Bakr al-Baghdadi appeared in a video last month, calling on his followers to move to guerrilla warfare as a new strategy.

Recent IS activity indicates that their sleeper cells have begun reorganizing themselves and expanding in vulnerable areas. This is due to differences between Baghdad and the Kurdistan Region and Baghdad and the Sunni areas, which allow IS to exploit security weaknesses and establish new mobile bases in the Hamrin Mountains and in the desert of Upper Mesopotamia so that it can undertake operations on a regular basis across the country.

by Haitham EL-TABEI with AFP correspondents in the Middle East | AFP | May 17, 2022
END_OF_DOCUMENT_TOKEN_TO_BE_REPLACED