Sunni town, Shiite PMU join forces in fight against IS

Hundreds of civilians flee daily from the Islamic State-controlled areas toward Sunni areas under control of the predominantly Shiite Popular Mobilization Units. 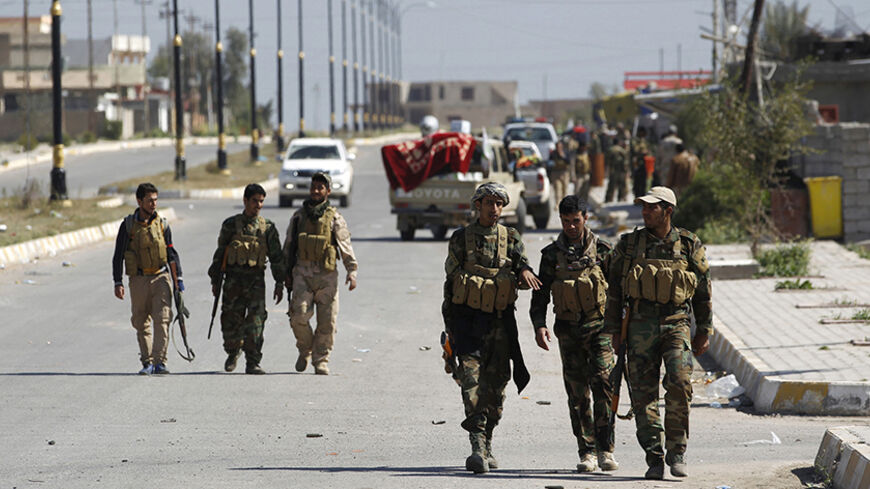 Fighters of the Popular Mobilization Units patrol in the town of al-Alam, Iraq, March 10, 2015. - REUTERS/Thaier Al-Sudani

AL-ALAM, Iraq — With the operation to liberate Mosul ongoing, dozens of families are fleeing the battlefield and are being killed simply because they are caught in the crossfire. Civilians fleeing Islamic State-held Hawija, 120 kilometers (74 miles) south of Mosul, toward al-Alam area were killed Nov. 5, and this has now become a daily tragedy.

Al-Alam is a Sunni town with strong tribal ties that has long collaborated with the predominantly Shiite Popular Mobilization Units (PMU) in the fight against IS. It is a predominantly agricultural town with an estimated 60,000 inhabitants, according to a local police officer, and is located just over 10 kilometers (6 miles) across the Tigris River from former President Saddam Hussein’s native city of Tikrit.

The Camp Speicher military base is also nearby, where IS killed as many as 1,700 soldiers in June 2014, including many young Shiite recruits. Al-Alam residents managed to save many soldiers from the base by secretly ferrying them across the river, hiding them in their homes and later taking them furtively to Kirkuk or other cities.

A monument at a roundabout near the entrance to the town commemorates a mass execution of local men from the dominant Jabouri tribe at the hands of IS, depicting several men dressed in orange jumpsuits just before they were killed. The roundabout has been renamed the Knights of al-Alam Square in memory of the victims.

"A mass grave is just over there," resident Naji told Al-Monitor while driving past it. One of his young daughters was also shot in the head and killed when his family was trying to escape IS.

He said that while the PMU gave local residents ammunition and fought alongside them, the Iraqi army did not help in any significant manner to liberate the town. His own family had been fleeing toward the Kurdish area in the north when one of the fighters at a checkpoint fired at the car and killed his young daughter.

Hawija, some 210 kilometers (130 miles) north of Baghdad, is where many IS fighters are originally from and reportedly where most of those involved in the recent massive attack on the city of Kirkuk had come from.

A resident who works with an international aid organization told Al-Monitor Nov. 21 that roughly 200 families from Hawija had "crossed the Hamreen Mountains" into al-Alam over the past week. He estimated that about 75% of them had remained in the town, while the others continued on to neighboring Tikrit, Samarra and al-Dour.

Further north, most inhabitants of towns being taken by the PMU along an axis toward Tal Afar — which they have been tasked with as part of the operations to retake Mosul and some of whom have been visited by Al-Monitor in recent days — do not seem to be coming out of IS-held territory or remaining when the PMU enter.

While many in IS-held areas further north and east flee toward territory held by the Iraqi army or Kurdish peshmerga forces, many Sunnis in towns taken by the PMU fear unlawful acts by the predominantly Shiite armed groups and instead either leave toward other areas still under IS control or find a more circuitous route out if possible.

An officer from al-Alam told Al-Monitor on condition of anonymity that he had collaborated with some PMU forces even before they got involved in the fight for his area.

The hatred against IS, which seems to have targeted the Jabouri tribe especially hard here, runs deep.

One man in his 20s from Hawija — who was severely tortured by IS in an attempt to extract information about "who he was working with to pass on information" through social media channels — told Al-Monitor that he now works as an English teacher in al-Alam, teaching both internally displaced persons (IDPs) and local students. He said he had in fact long been publishing information online about IS when living under its control, and he claims to have escaped from an IS jail.

The teacher said he escaped with the help of many of the locals still living under IS control in Hawija who did not support the group.

Two brothers also taken by IS for a period of time in Mosul — and imprisoned simply for being from the Jabouri tribe, they say, in an act that was meant to intimidate others — told Al-Monitor that many of the town’s residents are still detained in Mosul.

Most of the inhabitants questioned by Al-Monitor spoke positively about the role of the PMU in helping them return to their homes and liberate their area.

The face of a local celebrity, Umm Qusay — known for saving many young men from being killed during the Speicher massacre — even adorns a billboard alongside that of Hadi al-Amiri, the head of the Badr Organization — one of the largest groups within the PMU.

In speaking to Al-Monitor, Qusay praised PMU leaders and said that she now has an office in Baghdad. She proudly showed certificates thanking her that had been issued in Iran, a country that has long provided various forms of support to many of the PMU forces.

Residents say the PMU have "sacrificed their lives" alongside their own.

Al-Monitor was, however, pulled aside by one member of the community and shown a cellphone video featuring a prisoner stripped to his underwear, hands tied behind his back, who can be heard saying he is from the nearby village of Albu Ajil. Many residents of the town are said to have accepted IS when it held power.

The man in the video claims he is trying to return home but is taunted by his captors and then subjected to extrajudicial execution amid shouting of "Labaik Ya Zeinab" (a Shiite slogan that translates to "for he has come to rescue you, oh Zeinab). Al-Monitor could not verify the authenticity of the video.

Though residents acknowledge a debt of gratitude toward the PMU, an undercurrent of concern remains about armed groups with an unclear chain of command that may continue to be involved in extrajudicial acts of violence. Several comments about PMU members not using license plates or "doing whatever they want" were heard over a two-day visit there.

Meanwhile, IDP families continue to flee to the area from IS-held Hawija ahead of a much-discussed but still unimplemented plan to retake the city. However, unaccompanied men still raise suspicion if they do not have relatives in the area.

Al-Monitor was told by one source in the city that a recent attempt by Iraqi special forces to bring "around 180 men" from the retaken but still volatile town of Shirqat, 100 kilometers north of Tikrit, to al-Alam was rejected by local officials. Security and protection of the town’s inhabitants must be prioritized over all else, he said, which also serves as a prime reason for the alliance with the PMU.