Iranians shared pictures of Iranian divers from the Iran-Iraq War after Iranian officials reported that the bodies of 175 divers who were reportedly buried alive in the war were returned to Iran. 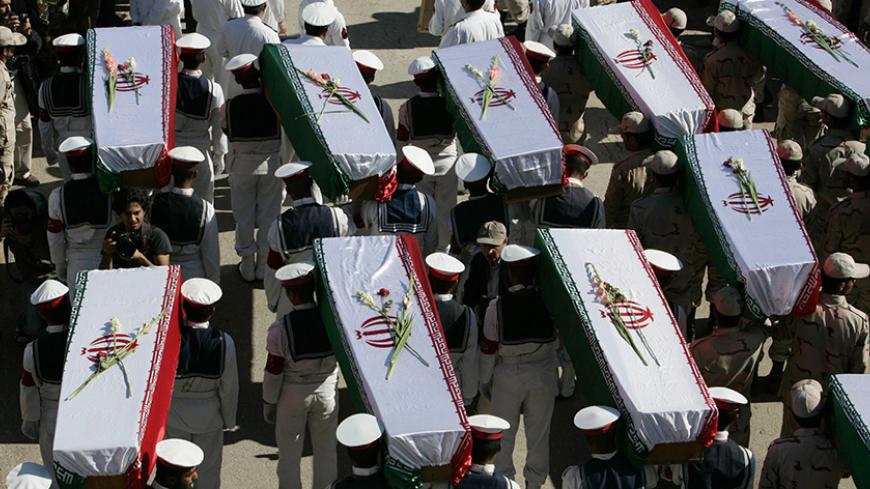 The bodies of 175 Iranian divers who were reportedly buried alive with their hands tied during the Iran-Iraq War were returned from Iraq, said Gen. Seyyed Mohammad Bagherzadeh, commander of the committee to find missing veterans of the armed forces of the Islamic Republic of Iran. The news touched off a wave of sympathy on Iranian social media, with many sharing the last pictures of the divers before they disappeared in 1986.

At a ceremony honoring the return of the bodies to Iran May 18, Bagherzadeh said, “The bodies of 175 martyrs who today entered the country belong to the divers of the Islamic Republic from the Sacred Defense [Iran-Iraq War], who were martyred with their hands tied by the Baathists during Karbala 4 operations.” He added, “Some of the bodies were discovered with no injuries, and we realized they were buried alive.”

According to Bagherzadeh, the bodies were brought into Iran from Shalamcheh, a city located in Iran’s southwest Khuzestan province on the Iran-Iraq border. The city was one of the main sites of the Iraqi invasion into Iran in 1980, which sparked the longest war of the 20th century. Operation Karbala 4, in which the divers went missing near the Arvand Rud waterway, took place in the latter stages of the eight-year war. Iranians suffered heavy losses in the three-day operation, mostly due to their heavy use of Islamic Revolutionary Guard Corps and volunteer Basij forces to push inside Iraq against the Iraqi military's superior arms.

In an interview with Fars News Agency in 2011, Gen. Abdullah Araghi, who participated in Operation Karbala 4, called it “the most anguishing and difficult operation of the Sacred Defense.” The operation set the stage for Operation Karbala 5 in 1987, which became the largest battle of the war, with both sides losing tens of thousands of soldiers.

The Iran-Iraq War has strong emotional connotations for both the Islamic Republic of Iran and the Iranian people, and Iranian social media reacted strongly to the news. Many tweeted the news with the hashtags #175martyrs and #tiedhands.

Artist Seyyed Abbas Emad Haghy drew a single diver underwater with the number 175 on his chest. Haghy reportedly said of the design, “When I was first drawing this, I tied his hands. But I got scared. Even tying someone’s hands in [the virtual world] is terrifying, let alone in real life.”

BBC Persian journalist Nima Akbarpour wrote on Twitter, “When I started the first grade, the war began. I was in the 11th grade when it ended, but it feels like it still has not ended — still news of it comes #divers #tiedhands.”

News of the Iran-Iraq War certainly does not end. Officials of the Islamic Republic keep the memory of the war alive. Saddam Hussein was the aggressor, and the United States, Western European nations and Arab countries in the Persian Gulf supported Hussein. This narrative that Iran is standing up to world bullies is still an important one. And even without Iranian media and commemoration events honoring the memory of the war, news of veterans' bodies returning from Iraq is endless. The website dedicated to finding and returning bodies of Iranian veterans is regularly updated, with a shocking May 9 report of the “entrance of 241 bodies of martyrs from the Sacred Defense into the country.”