The photograph, which many mistakenly believe features the children of the original veterans, is the latest of many popular Iranian efforts to keep the era's spirit of solidarity alive. 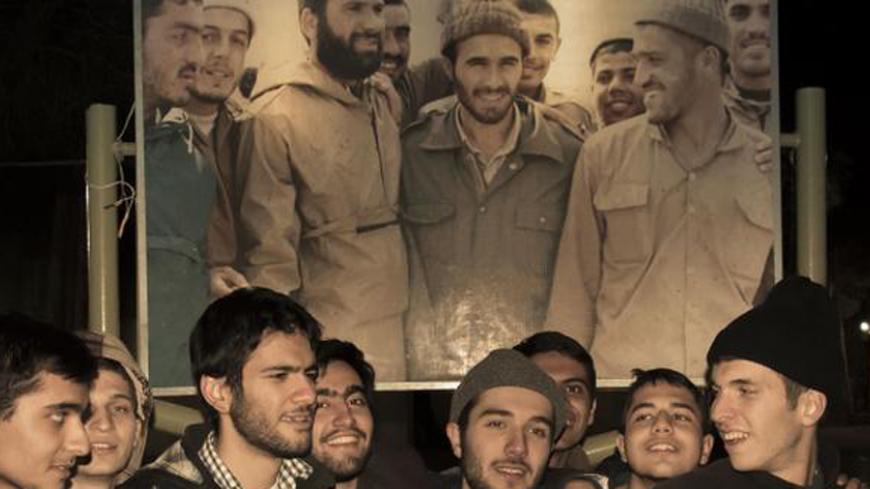 A group of Iranian youth are seen recreating a photograph of members of the Imam Hussein 14th Division taken during the Iran-Iraq War in this undated picture. - Twitter/@FarzadForPeace
Arash Karami
@@thekarami
January 7, 2015

The impact of the Iran-Iraq war in shaping the identity of the Islamic Republic of Iran cannot be overestimated. Iran was a young revolutionary government enjoying popular support when Iraqi President Saddam Hussein sent troops into Iran’s southwest Khuzestan region in 1980. The invasion by a neighboring country, though shocking, mobilized hundreds of thousands of Iranians and created a new avenue of revolutionary fervor.

For Iran, the war came to symbolize a fight of good versus evil, the oppressor versus the oppressed, the tyrant Saddam — funded by Arab states in the Persian Gulf, armed by Western Europe and given technology by the Americans — versus Iran, which was under international isolation and sanctions. That Iran could withstand Saddam’s army for eight years despite its many disadvantages helped solidify the idea of “resistance” in the Iranian psyche — still today one of the main causes of the Islamic Republic.

There are many efforts to remember the sacrifices of the war era in Iran today. Many streets in Tehran are named after those who died in the war. Large murals of the dead adorn the walls of Tehran’s buildings.

For some veterans, particularly those in the upper levels of the military and government, there is even nostalgia for the era. Though the reality of the early days of the revolution and the tumultuous war might be different for others and despite the massive loss of life and infrastructure, the period is remembered by some as a time when the revolutionary government had a popular cause and all political factions and ideologies worked together to defeat a common foe.

Today, many government institutions fund projects to keep the memories of the war era alive. One such project was the re-creation of a famous war-era photo that went viral on Persian-language and even English language social media.

After the emergence of the picture, which many believed to be a recreation featuring the children of the original soldiers, Mashregh News reported on some of the details: “The image that you see was recently published on social media. This picture is the result of the artistic creativity of a group of Hezbollah youth for a symbolic recreation of the fighters of Imam Hussein 14th Division.”

Mashregh reported that while some observers had claimed the children of the fighters participated in the recreation, “Despite the beauty of this picture, this claim is not true.”

The article read that the success of this picture could inspire such projects and that “There are many group pictures of the martyrs of the Sacred Defense that the Hezbollah youth and those who like the martyrs, with the goal of keeping it alive on social media, can make symbolic recreations of.”

One of its more telling sentences, Mashregh suggested that the idea could become “a movement that demonstrates the connection between two generations [and disprove] claims that there is a distance between them.”

According to Mashregh, two of the individuals in the original picture were killed in the war: Hossein Kharazi, fifth from the right, was the commander of the Imam Hussein 14th Division, and Ghorban-Ali Arab, third from left, was an operations deputy.