Many questions remain about the era of the Iran-Iraq War, which changed Iran's political and cultural landscape, but independent historians cannot yet research the subject to examine the government's official narrative and untold stories of the war. 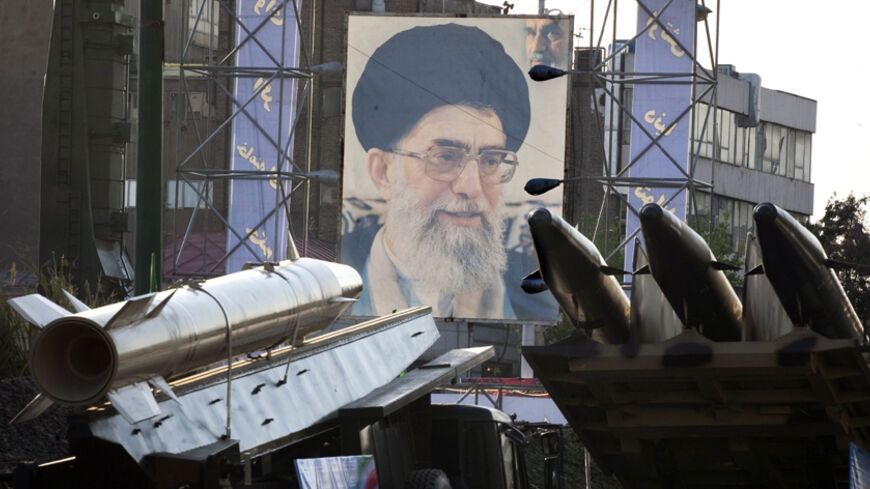 Iranian-made Fateh 110 (L) and Persian Gulf (R) missiles are seen next to a portrait of Iran's Supreme Leader Ayatollah Ali Khamenei at a war exhibition by the Revolutionary Guard Corps to mark the anniversary of the Iran-Iraq War in Tehran, Sept. 23, 2011. - REUTERS/Morteza Nikoubazl

A correspondent in Tehran
October 6, 2014

Sept. 22 marked the 34th anniversary of Iraq attacking Iran across its western border, starting a bloody war between the two countries. The occasion, as always, received a great deal of attention from Islamic Republic of Iran Broadcasting and other conservative media outlets. The costly and devastating war is rarely, however, examined with the nuance it deserves. Criticism of the events of that era only comes up when top leaders reveal details about it in attacking one another in the media over personal differences.

The eight-year war (1980-1988) was in many ways a unique event in Iranian history. One of its most important aspects was probably the massive participation of the Iranian people, from all the different regions of the country and levels of society. This year, the Organization for Safe-keeping and Publishing the Values of the Holy Defense, created after the war and operating under the supervision of the Iranian armed forces, reported, “During the war, 217,000 military personnel, 2,130,000 members of the Basij and 200,000 members of the Sepah [Islamic Revolutionary Guard Corps] and police forces defended the country against the enemy.”

According to the organization's figures, 190,000 Iranian “fighters” were killed and 672,000 were injured. A notable number of those wounded were injured by chemical weapons and eventually lost their lives later on, after the war. Their suffering continues to this day.

During the 1990s, a number of Sepah commanders, believing that the Sepah had played a crucial role in the war, entered the political, economic and cultural arenas. Most became members of the radical or Principlist factions.

That major segments of the country's economic and political lifelines were being pre-empted by the Sepah became evident after Mohammad Khatami was elected president in 1997. The former commanders headed a movement opposing the Reformist plans of the new president — elected with 70% of the vote — and the social and political forces that supported him.

The hostility of war veterans toward the Reformist administration and pro-democracy activists as well as the authoritarian faction's appropriation of the war narrative and use of it for propaganda purposes are among the reasons some Iranians do not look back on the war era with nostalgia.

Shirzad Abdollahi, a Tehran-based social analyst, told Al-Monitor, “The official narrative of the Iran-Iraq War, presented by the Iranian government during the 1980s, had three major themes: first, the conflict between Islam and infidels (religious); second, imperial powers attempting to destroy the Islamic Republic (political); and third, defending our honor, dignity and land (emotional).

He added, “After the war, the signs and symbols of the war became the exclusive possession of the government and certain factions within it. The official narrative is still the same. There is a red line preventing neutral historians and independent analysts from conducting research on this subject or commenting on it.”

Abdollahi believes that the massive participation of the Iranian people in defending their country and the large number of dead and wounded makes the war a unique chapter in Iran’s modern history. However, he stated, “The narrative of this war has to be reclaimed from the government-sanctioned historians, former commanders and members of one political faction. People need to know what happened. Why did the war last as long as it did? Why so many casualties? What was happening on the front during the last months of the war?”

The untold stories of the war usually come to light when Principlists want to attack a moderate figure, such as Ayatollah Akbar Hashemi Rafsanjani, by criticizing his actions during the war. For example, Sepah commander Yahya Rahim Safavi recently claimed that Rafsanjani had tried to take full control after the war ended. In response, Rafsanjani said that high-ranking clerics had planned to execute Safavi after his defeat in the Battle of al-Faw, Operation Valfajr (Dawn) 8, and that he, Rafsanjani, had prevented his death along with the execution of other Sepah commanders who had failed in their duties. This is how the public first learned of this story.

Ali Akbar Mahdi, a sociology professor at California State University, Northridge, believes that the overthrow of Saddam Hussein will make it easier for research to be done on the war. He told Al-Monitor, “No doubt, the fall of Saddam and the establishment of a Shiite government in Iraq has lessened political and military sensitivities regarding the Iran-Iraq War and has prepared the society for the possibility of doing more research on this subject. However, the post-revolutionary establishment in Iran has not yet abandoned its revolutionary characteristics. Memories of the winners and losers of those legendary stories are still alive in the minds of the people.”

According to Mahdi, “Any serious discussion regarding these legends — the positive and negative effects of them on the society and the wounded — can only take place when the ruling establishment no longer feels the need to hold on to those stories and when those who are discussing this issue do not have to pay a high political price for doing so. We still have a decade to go before we reach that time.”

In recent years, especially after the emergence of the Green Movement, under the leadership of Mir-Hossein Mousavi following the 2009 presidential elections, the Iran-Iraq War gradually became a topic of serious discussion among Iranian political activists. For example, in those years, a lot of young Iranians who were born in the 1980s or 1990s, and thus were either young children or born after the conflict, marked the anniversary of the start of the Iran-Iraq War by posting on social networks, empathizing with the Iranian soldiers who had fought. The same young people have also actively participated in marking the anniversary of the liberation of Khorramshahr, Iran’s most successful and important military operation during the war.

A professor of social sciences in Tehran University who spoke with Al-Monitor on condition of anonymity said, “I think Mir-Hossein Mousavi had a very influential role in the development of this phenomenon. During the war years, he was the prime minister of Iran, and then he became the leader of Iran’s most important social movement. Therefore, the two concepts became intertwined. Citizens saw that someone who is as brave as Mousavi can still have fond memories of the war era and present an alternative picture of it. Thus, they decided to make peace with the concept of war, to plow the field and see what unknown facts they can find to discuss and question.”