The Decline of Iran’s Hard-Liners

The election of Hassan Rouhani as president of Iran has revealed Iran's Principlist camp as a house of cards. 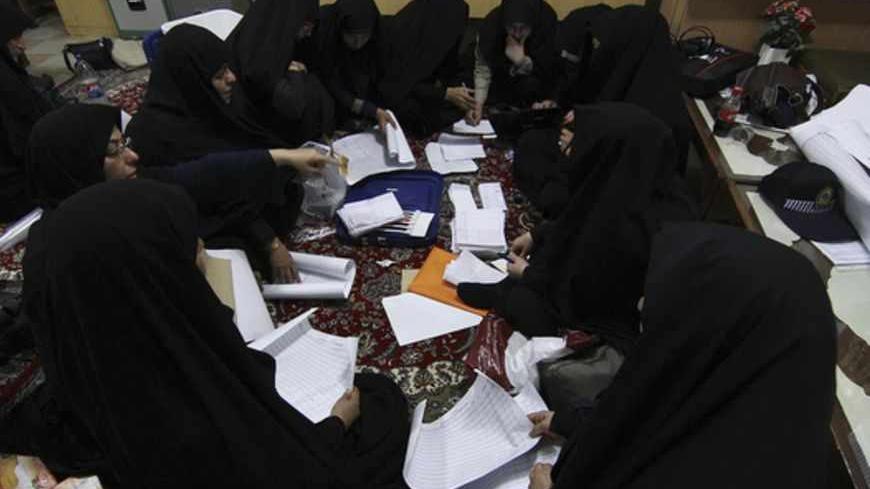 Iran’s hard-liners, known domestically as Principlists, are off balance for the first time in nine years following their devastating landslide defeat to political centrist Hassan Rouhani. The president-elect won with 51% of the votes, millions of which came from Reformists, who were mobilized en masse to elect who they saw as their best hope for change. Principlists Mohammad Bagher Ghalibaf, the mayor of Tehran, and Saeed Jalili, Iran’s arch-conservative nuclear negotiator, accrued 17% and 11% of the vote, respectively.

The 2013 election will likely be the death knell for the Principlist coalition, created in 2002 to wrest control of the country away from the then-dominant Reformist bloc that had consolidated power under former presidents Hashemi Rafsanjani and Mohammad Khatami. Following the Principlists' foray into mainstream politics in the 2004 parliamentary elections, they swept to power on the landslide runoff victory of Mahmoud Ahmadinejad in 2005. Over the course of Ahmadinejad’s eight years in office — with the help of rulings on pesky Reformists from the conservative Guardian Council — the camp successfully purged Reformists from the body politic of Iran.

But the election of Rouhani has turned the tide on the Principlists, revealing them to be little more than a bitterly divided and disfunctional rabble. A casual observer of this month’s presidential race — one that was dominated by Principlist candidates — may be forgiven for failing to realize that they were meant to be on the same team. Ali Akbar Velayati and Ghalibaf stayed in the race until the end, even though they had declared publically that one of them would drop out for the other to avoid splitting the conservative vote. In a live televised debate, Velayati savagely criticized Jalili’s record as nuclear negotiator and at times even appeared to take the side of Rouhani.

Mehdi Khalaji of the Washington Institute for Near East Policy said that the group has not splintered along ideological lines, but according to their factional allegiances or lack thereof, with key power centers within the political system of the Islamic Republic.

“The main issue is their constituencies, which differ in their degree of loyalty to Supreme Leader Ali Khamenei and to the security and military apparatus of Iran, especially the IRGC [Revolutionary Guard Corps],” explained Khalaji. “Every group will now need to reshape and refashion its position and policies after the election based upon these loyalties.”

“This is a crisis of the current political narrative of the Principlists,” said Walter Posch of the German Institute for International and Security Affairs in Berlin. “Their finest hour was the 2005 election of Mahmoud Ahmadinejad. Ever since then, they have tried to get the whole country into their hands, but they failed.”

Posch said that in many ways the Principlists have always been in a state of crisis, as they were cobbled together from conservative groups with very different masters. The failure of the bloc to coalesce around one candidate is final “proof of the animosities and the splintering of the camp,” he said.

In 2002 Mostafa Pourmohammadi, an intelligence figure who was involved in the murky political assassinations and counter-revolutionary activities of the revolution’s early years, deeply feared a coup over key traditionally conservative security agencies by the powerful Reformist bloc. Along with his radical contemporaries, he saw the Reformist tide as an existential crisis threatening the Islamic Republic itself.

To tackle this threat and the wider "deradicalization" agenda of the Reformists, Iran’s right consolidated into the Principlist camp, bringing together some of the traditional conservatives, including the merchant-class Motalefeh party, with radical, utopian fringe groups defined loosely as "Hezbollahis." It was these Hezbollahis, made up largely of veterans of Iran’s long war with Iran, that would soon define the Principlists. They had been marginalized most by the Reformists during the 1990s, and some of their constituents had even fought back violently with political assassinations of well-known liberals, intellectuals and religious figures. It was also from these groups that Ahmadinejad would emerge.

The 2005 election of Iran’s first "new right" was a boon for the Principlists, particularly Iran’s Hezbollahis, who had never before tasted real power. But over his two terms, Ahmadinejad went from the Principlists’ ally to the thorn in their side. During his second term the rogue president arguably became a greater nemesis to them than the Reformists they originally set out to fight.

The president shunned power-sharing overtures from the people who facilitated his rise and by 2007 was firing anyone he could that threatened him. Most of these people had personal or professional links to Khamenei. Espousing Iranian nationalism, Third-Worldism, social justice, religious romanticism or whatever position du jour served his purposes, Ahmadinejad managed to annoy the sensibilities of almost every political constituency in the country.

In his second term, after Khamenei controversially entered the political fray to publically back his president amid protests calling foul on his 2009 re-election, Ahmadinejad finally alienated what remained of the Principlist camp. His perceived troublemaking came to a head when he made a play to control the Intelligence Ministry by sacking Minister Heydar Moslehi, forcing Khamenei again to enter the messy world of politics and issue a rare order to override the president’s decision.

“He went independent. It was close to a coup,” said Posch. “He nearly got control over the Intelligence Ministry and was outsmarting and outmaneuvering the command of the IRGC. With these elements together he would have enough power to sideline others.

The 2013 election demonstrates just what both Ahmadinejad and his former brethren the Principlists have become to Iran’s electorate, which has always tended toward reform. Plagued by infighting, moderate Principlist factions will seek to join the apparatus of Rouhani’s new administration, while the radicals will be left to attack the government from the right.

“Ansar-Hezbollah [the only formal Hezbollahi party] will reformulate its position around poverty,” predicted Posch. “They will use the language of the Islamic class struggle in order to intimidate the government and will make an issue out of underdevelopment.”

Khalaji believes the remaining Hezbollahis will try to sabotage government efforts at rapprochement with the five permanent members of the UN Security Council plus Germany (the P5+1) over Iran’s nuclear program. He cites the aborted 2010 nuclear fuel-swap deal and Velayati’s secret nuclear deal with former French president Nicolas Sarkozy as examples of hard-liners scuppering chances for nuclear settlement between Iran and the West. “There is a long precedent of sabotage in Iran,” said Khalaji.

Despite the fracturing of the Principlists, the Reformists are unlikely to gain significant ground in the short term to implement their agenda of political development, democratization and improvement for civil liberties and press freedom. There are two reasons for this.

First, since the end of Khatami’s presidency in 2005, they themselves have lurched to the right by backing presidential candidates from the center out of the not-unfounded fear that the Guardian Council would block openly Reformist candidates. Their 2009 presidential candidate, Mir-Hossein Mousavi, was far from a bona fide Reformist and Rouhani, their man this time round, is a backroom operator with close ties to Iran’s intelligence and security services who has never openly supported their causes.

Second, after the problems Khamenei faced with Ahmadinejad asserting his own agenda, he likely sought to engineer, as best he could, the election of a president who will be pliant to his own demands. It seems likely that Rouhani will, first and foremost, execute the supreme leader’s economic, political and social agendas, many of which run counter to those of the Reformist camp.

Rouhani knows that the Iranian president can affect change in the country, but he will also be acutely aware that though he was the choice of the people, his boss, the supreme leader, is the choice of God.