In addition to opposition from the public and the Reformists, former Iranian President Mahmoud Ahmadinejad faces antagonism within his own Principlist camp. 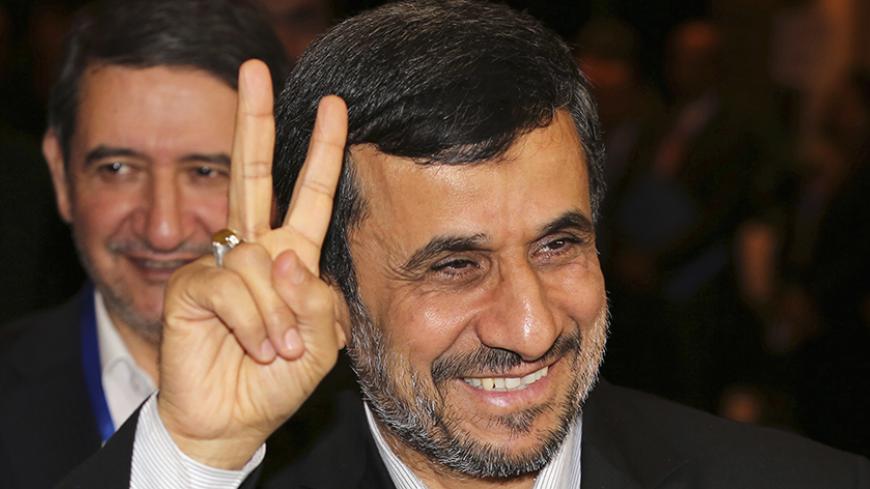 TEHRAN, Iran — Former President Mahmoud Ahmadinejad is trying harder than ever to make a political comeback. His path is sure to be filled with many challenges, considering that he faces opposition not only among much of the Iranian public and the Reformists, but even some figures within his own Principlist camp.

Prominent conservative cleric Ayatollah Ahmad Alamolhoda, the Friday prayer leader of the northeastern city of Mashhad known for his candid Principlist positions, made his opinion clear: “Mr. ​Ahmadinejad was an individual who went astray, died and is finished. Ahmadinejad is not a movement. He stood against the Guardianship of the Jurist and collapsed.”

Though he later denied it, Hossein Shariatmadari, the editor-in-chief of hard-line Kayhan who has been harshly critical of Ahmadinejad in recent months, reportedly told a gathering of university students Sept. 10, “If I wanted to grade Ahmadinejad fairly, he would get a very low score. He stood up against the supreme leader during his 11-day sulk back in 2011. When the Hezbollahis [religious conservatives] see this, they will not vote for him. I think it is unlikely that the Guardian Council will approve his qualifications.”

Aside from its radicals, some of the more moderate figures in the Principlist camp have also criticized Iran’s former president. Senior conservative cleric Gholamreza Mesbahi-Moghadam has said that Ahmadinejad lacks the qualifications needed to make a comeback, claiming, “Ahmadinejad is not competent enough to return to power. He has ruined his image among many distinguished figures and this has pushed him to the sidelines.”

Still, Ahmadinejad appears to be more active by the day. His many provincial visits and speeches have even prompted objections from some officials within the administration of President Hassan Rouhani. Interior Minister Abdolreza Rahmani Fazli stated, “Ahmadinejad has been warned that the launch of any political campaign before the official election period is illegal. He needs to have legal permits for his gatherings, not to mention that the content of his speeches is controversial and has the tone of an election campaign.” Still, Ahmadinejad continues to ignore these warnings and suggestions and is forging ahead with his activities, just as he did during his time in office.

The question is how can a person who won two presidential elections by relying on Principlist support possibly hope to make a comeback amid blunt criticism from the Principlists? Prominent Tehran University professor Sadegh Zibakalam told Al-Monitor, “Ahmadinejad knows that he is the only person who can challenge Rouhani. He also knows that the Principlists have no other candidate except him. [Former nuclear negotiator] Saeed Jalili and [Tehran Mayor] Mohammad Bagher Ghalibaf have already faced defeat against Rouhani in the previous vote. They do not have the ability to compete against Rouhani. Also, Ahmadinejad hopes that as the 2017 election nears, he can convince the Principlists to support him.”

Beyond the Principlist opposition, Ahmadinejad also faces the challenge of getting past the Guardian Council’s vetting of presidential candidates. Former conservative lawmaker Ahmad Tavakoli wrote over Telegram back in April, “There are sufficient religious and legal reasons to disqualify Ahmadinejad.”

In an interview with Al-Monitor, Saeed Laylaz, the deputy head of the moderate Executives of Construction Party, said, “We hope Ahmadinejad and everyone else are qualified for the election because we are principally against the disqualifying of candidates. On one hand, I believe that Ahmadinejad’s presence will cause division within the Principlist camp and remove the chance of a Principlist consensus, while on the other hand, it will strengthen solidarity among the Reformists surrounding Rouhani.”

Indeed, speculation within Principlist circles points to the absence of a new and powerful candidate who can compete against Rouhani in the May 2017 presidential vote. In past elections, the conservatives sent all their other potential candidates to the field — and all have met defeat. Ghalibaf has run for president twice: against Ahmadinejad in 2009 and against Rouhani in 2013. Jalili, the favored candidate of radical Principlists, secured only 11.3% of the vote in 2013, coming in third. Meanwhile, parliament Speaker Ali Larijani ran in the 2005 presidential race, but opted for a seat in parliament after receiving less than 6% of votes. Notably, Larijani has close ties with Rouhani and is unlikely to challenge him in the next presidential vote.

It may be that the Principlists’ main problem with Ahmadinejad is his former chief of staff, Esfandiar Rahim Mashaei, a man whose religious beliefs have come under harsh criticism by the more traditional members of the Principlist camp. Mashaei’s divergent viewpoints have been so persistent and prominent that when Ahmadinejad appointed him as his chief of staff for the second term of his presidency, the supreme leader officially objected to the move.

Hossein Shariatmadari, who was an adamant supporter of Ahmadinejad at the time, has reportedly said, “The supreme leader gave Ahmadinejad a letter asking him to remove Mashaei from the post. But Ahmadinejad did not abide and thus forced the supreme leader to make the letter public.” Shariatmadari, who allegedly made those remarks at the student association Office for Consolidating Unity on Sept. 10, was also quoted as saying, “No one has access to the supreme leader’s secret letters, and this letter was published with his coordination. But Ahmadinejad’s response was to give Mashaei 18 new posts and make him even more powerful than chief of staff.”

Thus, it seems that Ahmadinejad has not given up on pursuing his goal of a political comeback — especially since some of his comments point to hopes for the early demise of the Rouhani administration. Speaking recently at a gathering of his student supporters, Ahmadinejad said, “In the coming months, the pressures of public opinion and inefficiency will rise so much that Rouhani will leave the Cabinet before the month of May.”

For now, it is uncertain whether the Principlists will be willing to accept another defeat to Rouhani or be ready to succumb to Ahmadinejad and his many challenges. Or perhaps Ahmadinejad’s prediction will come true and there will be no Rouhani in the May 2017 vote.