Why Rouhani may have Khamenei to thank for avoiding Ahmadinejad

Former Iranian President Mahmoud Ahmadinejad appears to be making plans for a comeback in next year’s presidential vote — but will the conservatives forgive him for his disobedience of the supreme leader? 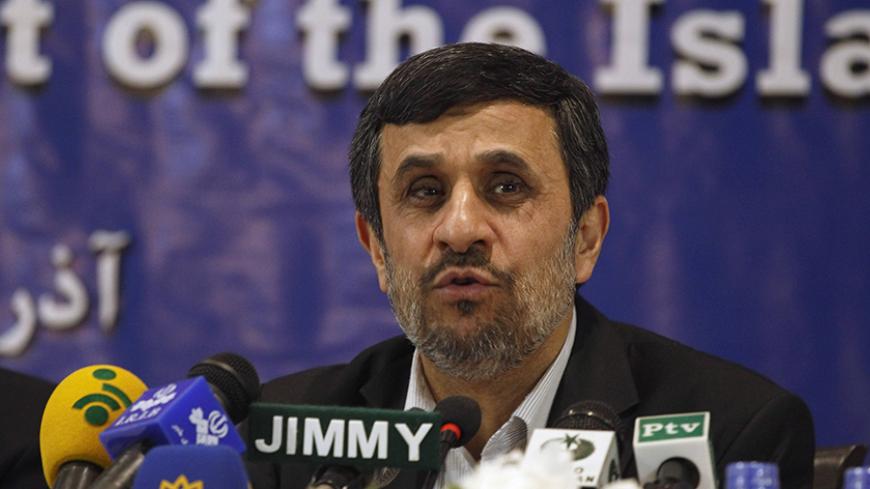 Iran's President Mahmoud Ahmadinejad speaks during a media conference at the Iranian Embassy after attending the Developing-8 summit in Islamabad, Nov. 22, 2012. - REUTERS/Mian Khursheed

TEHRAN, Iran — Former two-time President Mahmoud Ahmadinejad appears to have his eyes set on a third term in office. He has been traveling across Iran lately, addressing his supporters.

On July 29, in a speech in Mashhad, Ahmadinejad said, “They label me as a Freemason [a member of the secretive] Hojjatieh Society, anti–Guardianship of the Jurist [Iran’s ruling system] and a sorcerer. … During elections, some [in this manner] make attempts to disqualify their rivals." Moreover, in a speech in Bafq on Aug. 5, Ahmadinejad said, “I’m aware of the country’s issues, but for now, it is not the right time for me to enter [the stage], but when the time comes, I will be at the service of the nation.”

According to Iranian law, a candidate for the presidency must be a political or religious figure; of Iranian origin; a good manager and skillful; have a good reputation, be trustworthy and pious; be a believer in the foundations of the Islamic Republic of Iran, namely the constitution and the Guardianship of the Jurist; and be a believer in the state religion.

The Guardianship of the Jurist, or velayat-e faqih, is a theory in Shiite Islam that holds that Islam gives an Islamic jurist (faqih) custodianship over the people. The Guardian Jurist, who is commonly referred to as the supreme leader, is presently Ayatollah Ali Khamenei.

Conservative figures, such as prominent cleric Ayatollah Ahmad Alamolhoda, argue that Ahmadinejad has stood against the Guardianship of the Jurist — a decisive factor that the Guardian Council takes into account when vetting candidates. More broadly, there are four main points that may result in Ahmadinejad’s disqualification if he decides to seek another term in office.

First, the controversy surrounding the vice presidency of Esfandiar Rahim Mashaei: On July 18, 2009, Ahmadinejad appointed Mashaei, a controversial figure widely criticized for his “deviant” thoughts on Islam, as his first deputy. The appointment was immediately met with opposition from major conservative figures. Grand Ayatollah Makarem Shirazi described it as “illegitimate,” while Ayatollah Khamenei also objected to the appointment. Mohammad Hassan Aboutorabi-Fard, the former deputy parliament speaker, said, “The supreme leader wrote [Ahmadinejad] a letter. … I gave the letter to Mr. Ahmadinejad. The letter wasn’t answered. … I can’t remember exactly, but a few days after [the writing of] the letter had passed and the government hadn’t replied … Ahmadinejad met with the supreme leader. … Since the meeting was not fruitful, I published the letter.” After the publication of the letter, Ahmadinejad was ultimately forced to reverse his appointment of Mashaei as vice president.

Third, Ahmadinejad’s refusal to go to work: On April 17, 2011, then-Intelligence Minister Heydar Moslehi submitted a letter of resignation to Ahmadinejad, who had sought his replacement. However, as the supreme leader disagreed with Ahmadinejad’s stance, he ordered the reinstatement of Moslehi. According to conservative Jahan News, Ahmadinejad protested Ayatollah Khamenei’s measure by refusing to go to his office for 11 days. During this period, a series of political and religious figures visited his house, urging him to return to work. Ayatollah Mohammad Yazdi, a member of the Guardian Council, has retold the story of meeting with Ahmadinejad in his home, saying, “I told him that I was really worried, that he has greatly served this country and he is and has been a hard-working man and that I’m worried this matter will end with confrontation and tension with the leader. … I was really disappointed with his remarks, because I could see that [our discussion] did not lead anywhere. … I felt that he didn’t change at all.”

Fourth, Ahmadinejad’s stance on the nuclear issue: According to senior cleric Mesbahi Moghadam, Ahmadinejad submitted a report to the supreme leader in which he said, “We have reached the end of the road,” arguing that Iran should succumb to the United Nations Security Council resolutions on its nuclear program. In Moghadam’s telling, Ayatollah Khamenei disagreed with this stance: “Ahmadinejad told the leader that 'If you don’t accept this view, I will no longer be in charge of the [nuclear] file,'” to which Ayatollah Khamenei apparently replied that he himself will assume this responsibility.

These four episodes of contention imply that Ahmadinejad loathed to fully obey the supreme leader. As such, even though three years have passed since he left office, conservatives neither appear to have forgiven Ahmadinejad for his perceived trespasses nor believe that he has changed.

Alamolhoda, the Mashhad Friday prayer leader, has said, “Ahmadinejad was a person who took the wrong path, he is dead and he is over with. … He stood against the Guardianship of the Jurist and fell down.”

Perhaps unsurprisingly, Ahmadinejad is now trying to remove the bad memories he left in the minds of the conservatives — in any way possible. But will he be successful? In the words of conservative political analyst Abbas Salimi Namin, “Ahmadinejad is making attempts to get back to the leader. He is taking part in sessions held by the leader and is seeking to get close to him, but few intelligent people will be deceived [by these actions].”