Ahmadinejad is running for president in Iran ... again

Mahmoud Ahmadinejad, the unpredictable former Iranian president, has shocked everyone by registering to run for president against the supreme leader’s “advice" not to. 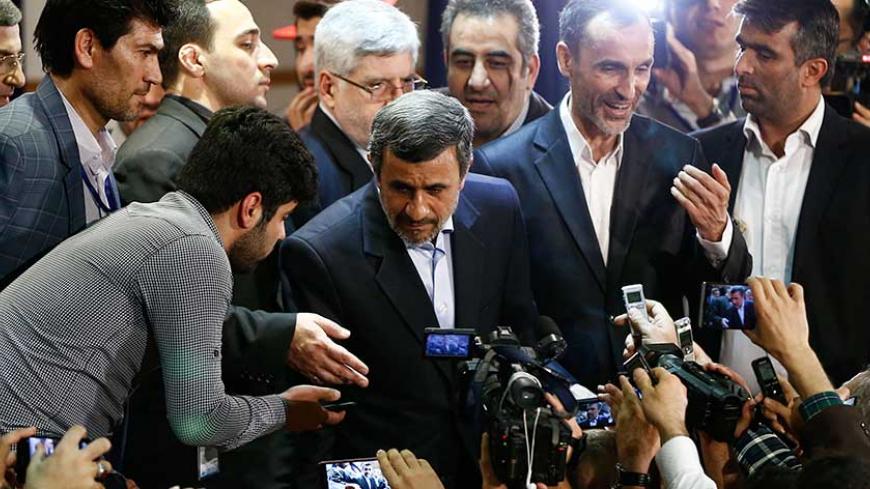 Iran’s former President Mahmoud Ahmadinejad surprised everyone April 12 by registering to run in the May 19 presidential election, a move that could be interpreted as directly defying Supreme Leader Ayatollah Ali Khamenei, who had publicly “advised” him last autumn not to run in the race.

When it comes to politics, Ahmadinejad is a clever operator. The hard-line politician has confused and misled everyone in recent months by indicating that he didn’t intend to run in the election, particularly as he encouraged his former vice president, Hamid Baghaei, to announce his candidacy for the presidency.

Since the first days of Khamenei’s “advice,” which initially was not made public, Ahmadinejad had signaled that he was not eager to take the hint. Rather, he continued his electoral trips to various provinces. Upon seeing Ahmadinejad's defiance of the supreme leader, conservatives started disclosing the former president’s meeting with Khamenei. The supreme leader, without naming Ahmadinejad, said he had advised the former president not to run in the election due to the possible polarization of society, as Ahmadinejad’s candidacy could lead to a repeat of the unrest in the aftermath of his disputed re-election in 2009. Following this disclosure, Ahmadinejad released a statement announcing his loyalty and commitment to the supreme leader. However, a few months later, in a surprising move, Ahmadinejad’s former vice president declared his candidacy, and Ahmadinejad officially threw his weight behind him, a move seen as as disobeying and opposing the supreme leader.

On the heels of Baghaei’s announcement, various video clips were released by Baghaei, Ahmadinejad and the former president's controversial friend and aide Esfandiar Rahim Mashaei, some of whose pronouncements have been interpreted as “deviant” by some religious conservatives. In one of the clips, Baghaei tells Ahmadinejad and Mashaei that “one of us must be sacrificed.” Based on this, it seems that Ahmadinejad is planning to pressure the conservative-dominated Guardian Council, which is tasked with vetting presidential candidates, to let Baghaei run. On April 12, after registering to run, Ahmadinejad and Baghaei both held a press conference in which Ahmadinejad said that his decision had been made in support of Baghaei, “I registered merely to support Baghaei and I will act according to the [supreme] leader's advice. … I'll be serving Mr. Baghaei with all my power." The former president added, “Some people say that the [supreme leader's] advice was meant to completely forbid [me from running], but what the leader said was just advice. … I am still committed to my moral promise."

Conservatives and many analysts have been saying in recent months that Baghaei wouldn’t get approval from the Guardian Council. Baghaei, who has crossed many of the red lines in Iranian politics, was jailed for unannounced reasons for more than 200 days and he still has cases that are being reviewed by the judiciary. Therefore, Ahmadinejad’s candidacy might have been registered just to prevent Baghaei’s disqualification. However, the former president may try to stay in the race, putting more pressure on the Guardian Council, which would probably disqualify him for defying the supreme leader; such a decision could then provoke Ahmadinejad's vocal political base. The likelihood of such a scenario caused conservative cleric Mohammad-Taghi Rahbar to voice his concern April 12 that Ahmadinejad’s candidacy could cause chaos in the country.

Ahmadinejad’s entering the race has angered conservatives who no longer consider him an insider. Elias Naderan, a conservative figure, tweeted April 12, “This is the end of Ahmadinejad.” This tweet may mean that Ahmadinejad, after disobeying the supreme leader and standing up to him, may have seen his political life in Iran come to an end. Conservative politician Hossein Kanani Moghaddam said April 12, “This is a suicidal move, and [Ahmadinejad] has entered the field wearing an explosives belt.”

Saeed Laylaz, a prominent Reformist analyst, said April 12, “The [target] audience of Ahmadinejad’s [candidacy] is not the Reformists but rather the high-ranking officials of the country. Ahmadinejad will probably turn into the Boris Yeltsin of Iran.”

Meanwhile, conservative Ayatollah Ahmad Jannati, who chairs the Guardian Council, has voiced criticism that too many people are registering to run for president. “On the first day [of registration, on April 11], 126 people registered to run in the presidential election, while many of them don’t have the necessary criteria [to be allowed to run],” Jannati said April 12.