Former Iranian President Mahmoud Ahmadinejad is believed to be back in the game with his former deputy’s announcement that he intends to run in the upcoming presidential elections. 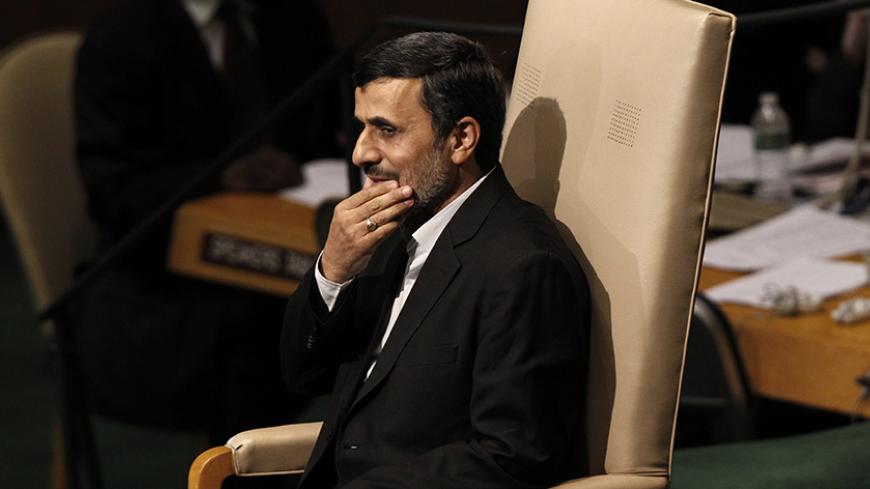 On Feb. 20, former Iranian Vice President Hamid Baghaei announced his intention to run in the country’s May 19 presidential election amid efforts among conservatives to reach a consensus over a single nominee. As such, Baghaei, who served as deputy to former hard-line President Mahmoud Ahmadinejad, is now, in effect, the representative of Ahmadinejad’s circle in the upcoming elections.

Ahmadinejad, who reportedly sought to run for office once again, was publicly “advised” by Supreme Leader Ayatollah Ali Khamenei not to seek the presidency again due to concerns about a repetition of the widespread unrest that followed Ahmadinejad's re-election in 2009. That vote eight years ago saw tense competition between opposition leaders Mir Hossein Mousavi and Mehdi Karroubi, who are now under house arrest, and Ahmadinejad. Mousavi and Karroubi objected to the results, saying the balloting was rigged.

During his second term (2009-13), Ahmadinejad repeatedly appointed figures and adopted policies that were considered to be against the views of the supreme leader. As such, conservatives who were once supporters of Ahmadinejad turned against him and labeled his entourage — and especially his senior aide Esfandiar Rahim Mashaei — as the “deviation current.” Indeed, conservatives demanded the dismissal of Mashaei, who was believed to have “deviated the thoughts of Islam,” but Ahmadinejad strongly resisted these calls, saying, “Mashaei means Ahmadinejad, and Ahmadinejad means Mashaei.”

In the 2013 presidential election, Mashaei announced his intention to run for office and was backed publicly by Ahmadinejad. However, the Guardian Council, which is tasked with vetting candidates, announced that Mashaei had been disqualified.

Now, Baghaei, another member of the former president’s Cabinet and a close associate of both Ahmadinejad and Mashaei, is determined to run against President Hassan Rouhani in the upcoming elections — but there is speculation about Baghaei's potential disqualification by the Guardian Council. This is particularly because he was arrested in 2015 and then held in solitary confinement for nearly a year. The precise reason behind the arrest was not initially announced, but it was rumored that his charge involved violations of the law during Ahmadinejad’s second term.

It is believed that Baghaei’s candidacy is Ahmadinejad’s plan to take revenge on his former friends in the conservative camp by splitting their vote.

Abdolreza Davari, a prominent figure close to Ahmadinejad, tweeted Feb. 21, “I have no doubt that we will begin Saturday, May 20, 2017, after hearing news of engineer Hamid Baghaei’s victory in the 12th presidential elections [of the Islamic Republic].”

Baghaei’s announcement that he intends to run for president has been met with ridicule from both conservatives and Reformists. Mashaei, after years of silence, defended Baghaei's chances of victory. He said Feb. 21, “The candidacy of Baghaei is perhaps considered a joke by some gentlemen, just like how Ahmadinejad’s candidacy was considered a joke in 2005.”

In the 2005 presidential election, most observers were certain that Ayatollah Ali Akbar Hashemi Rafsanjani would win, but surprisingly, Ahmadinejad and the ayatollah went to a second round with Ahmadinejad defeating the former president, who died in January.

Mashaei’s public support for Baghaei is important. Indeed, Mashaei’s comments are in effect a public announcement of Ahmadinejad’s backing of Baghaei — despite the former president’s recent statement that he will not support any one candidate in the upcoming elections.