Is Ahmadinejad plotting a comeback?

The arrest of two of the former president's advisers might be a warning that he should steer clear of a return to politics. 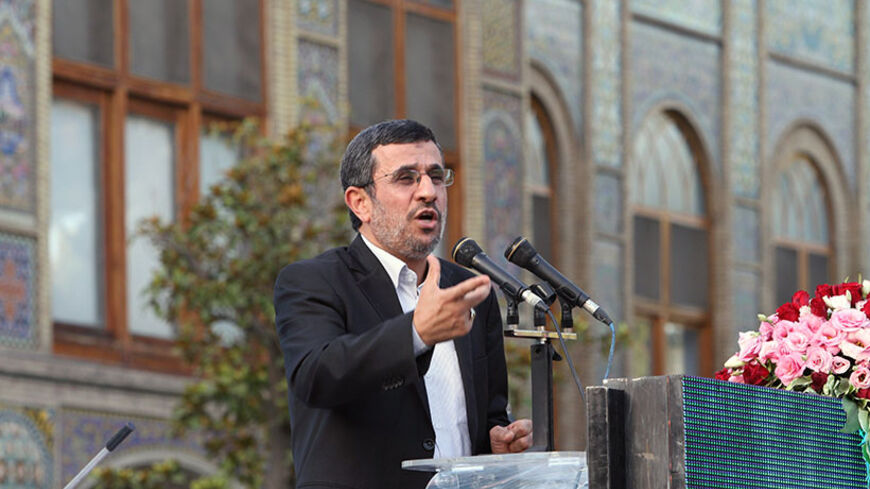 TEHRAN, Iran — On June 3, former Iranian President Mahmoud Ahmadinejad made his first major speech since leaving office last year. He praised Ayatollah Ruhollah Khomeini, who died 25 years ago on June 4, and said that Iran’s enemies have not yet realized that Iranians would defend the Iranian revolution “until the last breath.” Ahmadinejad, however, did not speak about the one thing that has been a source of speculation: his political return.

On May 31, his brother Davoud Ahmadinejad said that the chances of the former president running for the presidency again were “very high.” While Davoud’s comments did not receive the usual Ahmadinejad-type attention, it seems that other forces in Iran are taking his return to politics seriously, and are intent on preventing it.

The arrest of two political figures with close ties to Ahmadinejad, as well as the constant criticism directed at the former president by some of his own former ministers, indicates that the possibility of Ahmadinejad returning to the political arena is being taken seriously by the country's right-wing political elite.

Abdolreza Davari and Bahman Sharifzadeh, who were also chief campaign managers of the "long live the spring" campaign, were arrested in a period of five days. This campaign came to an end when their candidate, Esfandiar Rahim Mashaei, Ahmadinejad's former chief of staff and chosen candidate for the 2013 presidential elections, was disqualified by the Guardian Council.

During the final years of the Ahmadinejad administration, Davari was in charge of the National Iranian Copper Industry Retirement Fund. He was also one of the most important media figures in Ahmadinejad’s administration. Prior to the 2009 elections, he was the deputy director of the Islamic Republic News Agency (IRNA) and was in charge of the Research Organization of the Ministry of Interior.

Sharifzadeh, a cleric, is an ardent supporter of Ahmadinejad and his former chief of staff, Rahim Mashaei. During the 2013 presidential elections, he referred to Mashaei as "a miracle from Ayatollah Khomeini."

Although the judiciary officials are yet to elaborate on the reasons behind these arrests, IRNA has published a report saying: "Davari was arrested on charges of publishing lies and writing lies about officials."

During the past few months, Davari was quite active on Facebook and Iranian media outlets, defending Ahmadinejad's policies as president. He had also harshly criticized Ayatollah Hashemi Rafsanjani, the chairman of the Expediency Discernment Council of Iran and President Hassan Rouhani on his Facebook page.

On May 9 during a meeting with the moderate political faction, Kaargozaaraan, Rafsanjani said that Ahmadinejad's possible return to the political arena is not a threat but an opportunity. It is an opportunity to review eight years of crime." In a sardonic response at Rafsanjani’s age, Davari wrote: "When one has lived for eight decades, then it is time to review one's own right and wrongdoings. It is dangerous to think that one is immortal."

It's hard to imagine that Ahmadinejad's supporters have only been arrested because they have criticized those who oppose the former president. It's likely that these arrests are warning signs coming from a group of political elites who are not going to accept the possibility of Ahmadinejad, or people close to him, returning to the political arena. The judiciary and police force are in control of right-wing forces in Iran, and if the arrests of Ahmadinejad associates are political, it is they who are making these decisions.

As Sadegh Zibakalam, a professor in Tehran University, said to website Fararu: "Certain factions are conveying this message to Ahmadinejad that you should not think about the future presidential elections or the next year's parliamentary elections. Your future is in the University of Science and Technology."

Since early 2011, following the high tension between Supreme Leader Ayatollah Ali Khamenei and Ahmadinejad over the dismissal of the minister of intelligence, Heydar Moslehi, major powerhouses in Iran such as the Islamic Revolutionary Guard Corps, the judiciary, parliament and a large number of right-wing media outlets, including Fars News Agency and Keyhan, lined up against the former president.

After Moslehi was reinstated to his post by Khamenei's direct order, Ahmadinejad stayed home for almost two weeks and refused to show up for work. The right-wing factions interpreted his actions as a sign of him not listening to the instruction of the supreme leader and the security organizations arrested a few individuals with close ties to Ahmadinejad and Mashaei. The tension remained strong until Ahmadinejad's last day in office. Eventually, Ahmadinejad's right-hand man, Mashaei, who was labeled "leader of the deviant current" by the right-wing media, was disqualified by the Guardian Council and barred from taking part in the 2013 presidential elections.

Many right-wing figures continue to harbor resentment against Ahmadinejad for his divisive actions.

On May 6, 2013, Moslehi talked to Fars News Agency about Ahmadinejad and their argument over the position of Mashaei: "Regardless of whatever spiritual position Mashaei might have, put him aside for now,” Moslehi warned Ahmadinejad.

Moslehi is not the only former minister to publicly speak against their former boss. On May 17, 2014, Mohammad Jahromi, who served as the minister of labor and social affairs said in an interview with ISNA that he “regrets” working with Ahmadinejad, adding, “Ahmadinejad would sometimes say things that were not 100% logical.”

He also asked the Guardian Council, the conservative organization which is responsible for evaluating election candidates in Iran, to prevent Ahmadinejad from taking part in future elections: “If the Guardian Council takes its own role as the 'guardian' seriously, which I am sure it does, then I doubt that it will confirm Ahmadinejad as a qualified candidate.”

Parviz Kazemi, the former minister of welfare and social security, told Nameh News, "Ahmadinejad in 2009 was different from who he was in 2005. He changed more and more every year; he became egocentric."

Marzieh Dastjerdi, the only female minister in the history of the Islamic Republic, who served as the minister of health during Ahmadinejad's second term, was dismissed eight months before the end of Ahmadinejad's second term as president. In a revealing interview with Fars News Agency, she said she was dismissed because she criticized the budget allocation policy of the administration; but, the next day “they wrote in their government-owned newspapers that the Ministry of Health has used its allocated budget to import cosmetic and makeup items."

Although Ahmadinejad's faction was eliminated from politics following the presidential elections, Khamenei appointed Ahmadinejad as a member in the Expediency Discernment Council. Also, last fall, during the mourning ceremony of Ashoura, he was sitting next to the supreme leader. Two months ago, other images were published showing Ahmadinejad and Khamenei next to each other during the second night of the mourning ceremony of "Fatimiyah."

What these images might mean is that, in spite of his disagreements with Ahmadinejad, Khamenei still views him as an influential political figure or that at least Ahmadinejad is not yet completely removed from the list of people close to Khamenei.

Given this tacit support by Khamenei, neither Ahmadinejad nor his supporters seem deterred. Davari said in April, “I assure you that currently we do not have an organized plan for the next elections. However, this might change in the future.” He continued, "If these anti-people policies of the current administration continue, then I think Ahmadinejad will restart his political activities to defend the people's rights."