How Khamenei played his ace to sideline Ahmadinejad

Mahmoud Ahmadinejad appeared to be on the verge of disobeying Supreme Leader Ali Khamenei until the ayatollah went public with his disapproval. 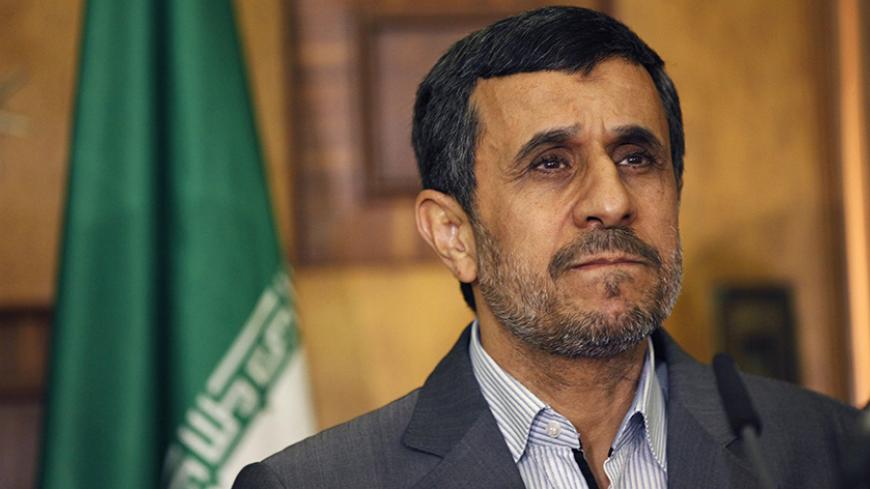 Former Iranian President Mahmoud Ahmadinejad finally got the opportunity to meet with Supreme Leader Ayatollah Ali Khamenei on Aug. 30. In the 40-minute meeting, Ahmadinejad reportedly sought to obtain Khamenei’s view on his pursuing a possible bid for the presidency in the May 2017 elections.

The media reported Ahmadinejad saying, “The weak actions of the [incumbent] government have left people devastated, and they ask me to enter the election.” The supreme leader is said to have replied, “Your [provincial] trips shouldn’t look electoral, because you are not supposed to take part in the competition.” Khamenei continued, “Your presence in the election will polarize it, and this is not in the interest of the revolution and the people, and you should resist these demands [of people].”

The meeting, and what transpired during it, was not supposed to have been made public. After Khamenei’s reported rejection of an Ahmadinejad candidacy, however, the circle around the former president began leaking details of the secret meeting on social networks, especially via Telegram, the popular smartphone app. The aim of the leaks appears to have been to rally public opinion in favor of allowing Ahmadinejad to run.

All the while, the Principlist former president remained silent, suggesting that he did not intend to sit back and forgo the election. As a result, conservatives who believed that Ahmadinejad was still planning to get back into the game wrote a series of articles confirming the secret meeting and asking him to obey the supreme leader.

As recently as Sept. 15, Ahmadinejad was still clearly signaling that he was adamant about contesting the 2017 vote. That day, he visited the northeastern city of Gorgan on one of his provincial trips, which looked quite “electoral.” Three days later, on Sept. 18, Fars News Agency published a report affirming Khamenei’s “advice” to Ahmadinejad and warned him about going against the velayat-e faqih (guardianship of the jurist), Iran’s ruling political system, which is based on a theory in Shiite Islam that holds that Islam gives an Islamic jurist, or “faqih,” custodianship over the people. Fars wrote:

Following the conservatives’ affirmation of the secret meeting between Khamenei and Ahmadinejad, the former president’s friends and supporters went to the next phase of their plan — denying all reports of the meeting. Indeed, it appears that they assumed that the supreme leader would never make a public statement on the matter to contradict them. As such, on Sept. 24, Abdol-Reza Davari, a political analyst and known Ahmadinejad media adviser, criticized the reports in conservative media about Ahmadinejad having secretly met with the supreme leader, calling it “psychological warfare.”

Davari said, “This piece of news isn’t valid, as it hasn’t been published by the official media [of the supreme leader]. And we shouldn’t pay attention to this. Even If Ahmadinejad had said this, I would have said this is not valid.”

The same day, Bahman Sharifzadeh, a cleric close to Ahmadinejad, said, “These quotes do not affect Ahmadinejad’s thinking. … As far as I have heard, his provincial trips will continue.” He added, “About the supreme leader, no quote is acceptable as long as it is not published by his office.”

If anything, the debacle made observers of Iranian politics reminisce about the controversies surrounding Ahmadinejad’s close confidant Rahim Esfandiar Mashaei. Ahmadinejad had appointed Mashaei, widely criticized for his “deviant” thoughts on Islam, as his first deputy in July 2009. The appointment immediately met with opposition from major conservative figures. Subsequently, the supreme leader wrote Ahmadinejad a private letter expressing his opposition to Mashaei's appointment. As in the recent scenario, Ahmadinejad hedged.

Mohammad Hassan Aboutorabi-Fard, the former deputy parliament speaker, has stated, “The supreme leader wrote [Ahmadinejad] a letter. … I gave the letter to Mr. Ahmadinejad. The letter wasn’t answered. … I can’t remember precisely, but [even] a few days after the letter was passed, the government had not replied.” Following publication of the letter by the supreme leader’s office, which was unprecedented, Ahmadinejad was ultimately forced to withdraw his appointment of Mashaei as vice president.

As Ahmadinejad’s aides were denying Khamenei’s most recent rejection, the one thing they never thought would happen actually happened. On Sept. 26, the supreme leader went public about the matter in a speech, stating, “I didn’t tell him don’t run. I said it’s not in your own or the country’s best interest to run.”

The next day, Sept. 27, Ahmadinejad penned a letter to the supreme leader, saying, “You recommended that it is not suitable at this time for me to participate in the election. Therefore, I have declared my obedience. … I have no plans to compete in next year’s election. … God willing, I will always proudly remain the revolution’s little soldier and a servant to the people.”

Despite the letter, the whole debacle appears to have, if anything, convinced conservatives already distrustful of Ahmadinejad that the former president is not loyal to Khamenei, given that he initially appeared not to heed the supreme leader’s advice. He only retreated and expressed a readiness to obey Khamenei when he had no other option after the supreme leader publicly commented on the situation.

Iranian law stipulates that presidential candidates must be committed to obeying the guardian jurist. This tenet is one of the most crucial elements in the Guardian Council’s vetting process. Thus, it looks like Ahmadinejad may have lost not just the game ahead of next year’s vote, but the poll four years after that as well.