Can Iran's conservatives agree on candidate for upcoming vote?

In Iran, the Principlist camp remains torn by internal strife and continues to fail to agree on a consensus candidate to run against President Hassan Rouhani. Yet, it is too soon to tell whether Rouhani will secure a second term. 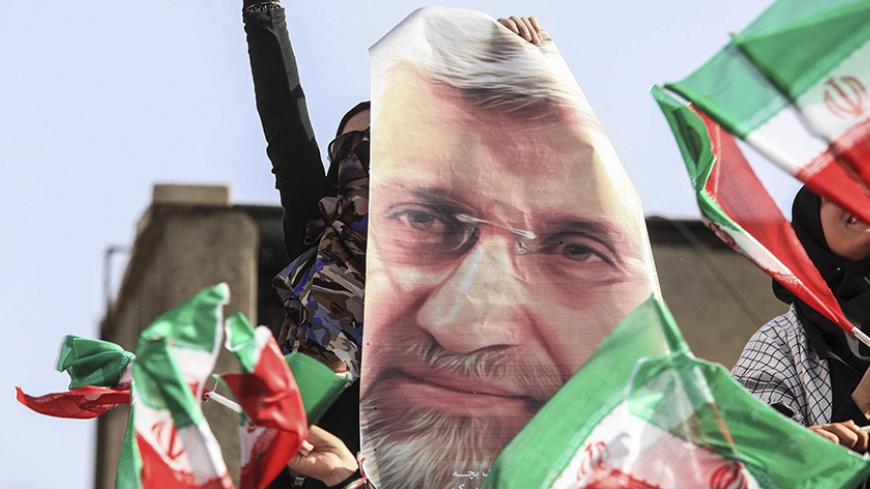 A supporter of Iranian presidential candidate Saeed Jalili holds up his picture during a rally in Tehran, Iran, June 12, 2013. - REUTERS/Yalda Moayeri

Iranian Principlists are finding that getting their house in order ahead of an election is becoming more complicated than ever. As the conservative camp takes measures to agree on a single candidate who can challenge incumbent Hassan Rouhani in the May 19 presidential election, reports of internal strife continue to surface.

In an attempt to unite behind a consensus nominee, some Principlists announced the formation of the Popular Front of Revolutionary Forces, known by its Persian acronym JAMNA, on Dec. 25. The founders of this group are 10 Principlist figures who many have speculated will be potential presidential candidates. Among them is former Minister of Health and Medical Education Marzieh Vahid Dastjerdi, one of the Principlists’ top prospects. However, JAMNA has yet to get the broader conservative camp to agree on a single candidate.

Meanwhile, former President Mahmoud Ahmadinejad (2005-2013) has introduced Hamid Baghaei, who served as his second-term deputy (2009-2013), as a candidate, indicating that he has no plans of going under the Principlist umbrella. Further highlighting his intent on pursuing an independent path, Ahmadinejad voiced his support for Baghaei on March 10, while at the same time attacking both the Principlists and the Reformists.

Ahmadinejad is not the only conservative who is distancing himself from the Principlist camp and dancing to his own tune. Iran’s hard-line former nuclear negotiator, Saeed Jalili, has also been engaged in independent electoral activities in the past few months, demonstrating his will to run in the upcoming vote. Attempts to convince Jalili to go under the Principlist umbrella have also failed to produce any results. In a Jan. 8 interview, conservative theoretician Mohammad Reza Bahonar publicly warned Jalili against pursuing his current path, saying, “Our friends should be aware that the upcoming presidential election will have only two distinct candidates. Those who want to undermine this will face serious problems. If they think that with 5 million votes, they can create problems for someone, they are wrong, since ultimately, they will obtain [no more than] 500,000 votes. I remind not just Jalili but all Principlists of this.”

Moreover, in a Jan. 19 interview, former member of parliament Hassan Sobhani-Nia also urged Jalili to respect the Principlists’ efforts to forge consensus. He said, “If Jalili sees unity as a positive thing, he should accept the framework that can lead up to it. [Even] if this [framework] leads to unity over [Tehran Mayor Mohammad Bagher] Ghalibaf, he must accept it.”

The Principlists’ concern about Jalili’s independent approach has slowly been increasing, and their rhetoric shows that efforts aimed at convincing him to accept the JAMNA umbrella have been fruitless.

Indeed, in an interview with Iran’s Khabaronline news website on Feb. 22, Gholamreza Mesbahi-Moghadam, a former conservative member of parliament, further expressed his concern about the potential of Jalili’s independent candidacy. Mesbahi-Moghadam, who is also the spokesman for the Combatant Clergy Association, said, “If Jalili does not join JAMNA, he will not win. Nonetheless, he will split the Principlists’ vote. Our eye is more on our own forces than that of our rival [Rouhani], and there is concern that our friends will split each other’s votes.”

Meanwhile, Ahmad Bakhshayesh Ardestani, a former parliamentarian and member of the hard-line Endurance Front, said on Feb. 28 that he sees a second shot at the presidency by Jalili, having lost in 2013, as pointless. “With all his efforts, Jalili was not able to win more than 3 million votes [in the 2013 vote]. Therefore, it is better that a new individual be introduced," he said.

Yet, despite the criticisms and advice of Principlist politicians, Jalili is adamant about pursuing his own path. He has been going on provincial tours, has become more active on Twitter and is criticizing the performance of the Rouhani administration with an ever harsher tone.

On March 11, he traveled to Kohgiluyeh and Boyer-Ahmad and met with those living in the southwestern province’s impoverished areas, visiting potential voters in their ramshackle homes.

But Jalili is not just going all solo. Ayatollah Mohammad Taqi Mesbah Yazdi is perhaps his most significant supporter. On March 13, the spiritual head of the Endurance Front threw cold water on JAMNA supporters, saying, “I accept no coalition and will not trust anyone’s promise. I may hold talks with friends, but cannot guarantee support for a specific person. Whenever I come to the conclusion that an individual is the best fit, I will support him.” He added, “If a person who causes most harm is going to win, then voting for his rival is best as it will prevent this harm.”

Mesbah Yazdi backed Jalili in the 2013 presidential election, then calling him the best candidate and someone who has “no weakness in fundamentals and principles.”

The Reformists and supporters of the Rouhani administration are perhaps the most pleased with the current situation, given that their media outlets continuously point out the differences among Principlists. Indeed, Entekhab website, a pro-government news outlet close to the family of late Ayatollah Akbar Hashemi Rafsanjani, welcomed the Principlists’ differences in a March 11 report titled, “The start of a must-see clash between Ahmadinejad and Jalili.”

Conservative, yet pro-government, news website Khabaronline has also conducted a series of interviews and reports on Principlist politicians focusing on Jalili’s independent candidacy and the serious differences among Rouhani’s Principlist rivals.

But the strife among Principlists does not end here. Parliament Speaker Ali Larijani has also criticized JAMNA. Larijani, who unsuccessfully ran as the agreed Principlist candidate in the 2005 presidential election, attacked JAMNA on March 4, voicing his anger over its criticism of a bill on the salaries of state managers. He said, “A newly formed faction has proposed an incorrect matter using an even more incorrect language about a bill on the salaries of [state] executives. … They say some things for electoral purposes, while their own report cards clearly show their salaries during the time they served as lawmakers.”

Also, in a press conference on March 13, Larijani declared that JAMNA had not sought out his view on a Principlist candidate for the May 19 election. “Our friends did not ask me for an opinion. Of course, even if they had asked, I would not have had the time to attend their meetings. I’m a friend of Mr. Rouhani, but have no plans of interfering in the presidential elections," he said.

Amid the chaos in the Principlist camp, things seem to be moving in favor of Rouhani and to the disadvantage of Ghalibaf. The Tehran mayor had been expecting his fellow Principlists to line up behind him to compete against Rouhani once again. With all this, the incumbent is probably the happiest of all these days, given the internal strife among his rivals. Yet, politics teaches us that one cannot overly trust these kinds of situations to always produce the expected outcome. For instance, former US presidential candidate Hillary Clinton, having secured the Democratic nomination, watched as the Republicans became embroiled in unprecedented infighting along with the gradual and unexpected rise of Donald Trump. Yet, today, Clinton is sitting at home, and it is Trump who is sitting in the White House.