Iranian conservatives more divided than ever

Five months after their defeat against Hassan Rouhani in Iran’s presidential elections, Iranian conservatives appear more divided than ever. 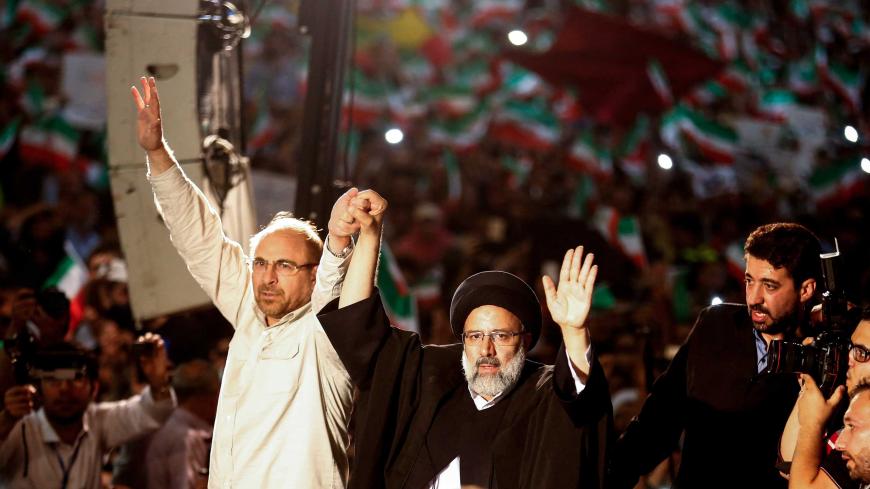 Following their electoral defeat against the Reformists, Iran’s conservatives appear to be grappling with greater internal differences than ever before. Indeed, the multitude of voices coming out of the Principlist camp seem to have reached an all-time high, and in the absence of one political leader, this could become an Achilles’ heel for them.

These internal differences began as candidates launched their campaigns in the run-up to the May 19 presidential elections. The majority of the conservatives entered the electoral scene under the umbrella of the Popular Front of Islamic Revolution Forces, better known by its Persian acronym, JAMNA. Through its selection mechanism, amounting to a primary of sorts, JAMNA ultimately agreed on two main Principlist candidates: Ebrahim Raisi, the custodian of the holy shrine of the eighth Shiite imam, and Mohammad Bagher Ghalibaf, Tehran’s former mayor.

Meanwhile, some conservative groups and figures, such as former chief nuclear negotiator Saeed Jalili, criticized this selection process and rejected the very idea of JAMNA from the start. Others, like the Islamic Coalition Party — one of the oldest political parties in Iran, which dates back to before Iran’s 1979 Islamic Revolution — also refused to accept JAMNA and said it would introduce its own candidate for the elections. Thus, Mostafa Mirsalim, a former minister of culture and Islamic guidance (1994-1997), was named as the Islamic Coalition Party’s nominee.

Almost all opinion polls indicated that Mirsalim would not be able to secure more than 1% of the votes. Yet he continued to stay in the race until the very end, refusing to step aside in favor of the Principlists’ leading candidate, Raisi. This was even though pressures had intensified on Mirsalim to step aside as election day neared, with the Islamic Coalition Party even issuing a statement claiming that he had dropped out in favor of Raisi. However, shortly after, Mirsalim denied all such claims and announced that he had no intention of stepping down in favor of anyone.

It should be noted that Mirsalim’s insistence to remain in the race did not have much of an impact on his or Raisi’s votes. The former minister won just a little over 1% of the popular vote, which would not have made a difference for the main conservative candidate. In a Sept. 10 interview, Mehdi Chamran, the conservative former head of the Tehran City Council (2014-2017) said, “After the elections, Mr. Raisi said I’m truly happy that Mirsalim did not drop out; otherwise, he [Mirsalim] would have claimed that he had 10 million of my [Raisi’s] votes.”

Meanwhile, Ghalibaf — who did step aside in favor of Raisi — did not seem too happy about his move. In a television interview on July 31, Ghalibaf criticized the Principlist movement and said, “It was not my personal decision to step aside. I knew that [only] one [conservative candidate] had to stay in the scene. But I preferred myself to remain because statistics and opinion polls pointed to that as well. But every time there was talk of [someone] dropping out, everyone would look at me.”

Following the elections, on July 22, Ghalibaf wrote a letter to Iran’s revolutionary youths where he strongly criticized the Principlists and called on the youths to evolve and develop the conservative camp — an expectation that would naturally place him at the leadership of such a movement.

In Ghalibaf’s view, the Principlist camp had never valued him as it should and had preferred others over him at critical junctures. This is why the former Tehran mayor was attempting to make structural changes from within the lower ranks of the camp.

Yet the multidimensional nature of the conservative movement does not end here. Jalili, who unsuccessfully ran in the 2013 presidential polls and is close to the more radical Principlist groups, is also pursuing his own agenda. Jalili is very passionate about the idea of forming a shadow government, and although he has had little luck in doing so, he is counting on the more radical conservatives to back him in pursuing this goal. The conservatives’ defeat against President Hassan Rouhani in the 2017 presidential elections has only provided him with further opportunity to pursue his vision by criticizing the prevailing structure of the Principlist camp.

Former President Mahmoud Ahmadinejad (2005-2013) forms another dimension of the conservative front, although he views himself as independent of all political parties. On Sept. 25, Ahmadinejad posted a video on his Telegram channel where he appeared to be addressing people. The footage, which quickly circulated on social media networks, showed Ahmadinejad criticizing parliament Speaker Ali Larijani and saying, “Mr. Larijani wants to prepare himself for the 2021 presidential elections and sees me as the main obstacle in this path. That’s why he is trying to pressure me and those close to me through his connections.”

Ahmadinejad’s attack against the parliament speaker comes as some view Larijani as the symbol of a classic Principlist who in recent years has distanced himself from the camp due to its hard-line activities and instead now enjoys close ties with the Rouhani administration. It should be noted that Larijani ran as a conservative in the 2005 presidential elections, which first brought Ahmadinejad to power. However, he was eliminated in the first round of voting, coming in sixth place after late Ayatollah Akbar Hashemi Rafsanjani, Ahmadinejad, former parliament Speaker Mehdi Karroubi, Ghalibaf and former Minister of Science Mostafa Moin.

It should also be noted that some Principlist groups don’t even consider Larijani a conservative anymore and have strongly criticized him for his close ties with the current administration. In a recent development, a picture of Larijani next to former Reformist President Mohammad Khatami (1997-2005), the leader of the Reform movement, surfaced on Sept. 23, causing a great deal of controversy and harsh criticism from hard-liners. Some even described the photo as an attempt by Larijani to launch his campaign for the 2021 presidential elections.

As such, Iran’s conservative camp today is more divergent than ever. This is perhaps due to a lack of leadership in the camp and the existence of multiple forces who each see themselves as being superior to others. This is not to mention that not all Principlist groups accept Ayatollah Mohammad Taghi Mesbah Yazdi, the hard-line cleric who is seen by many as the spiritual father of the conservative front. Thus, it seems as if each part of the movement is branching out for itself, with none willing to accept other factions.