Iran's energized conservatives move to unite ahead of upcoming polls

Reinvigorated by the Trump administration’s harsh rhetoric against the Rouhani administration, divided Iranian conservatives appear to be coalescing around a new grouping. 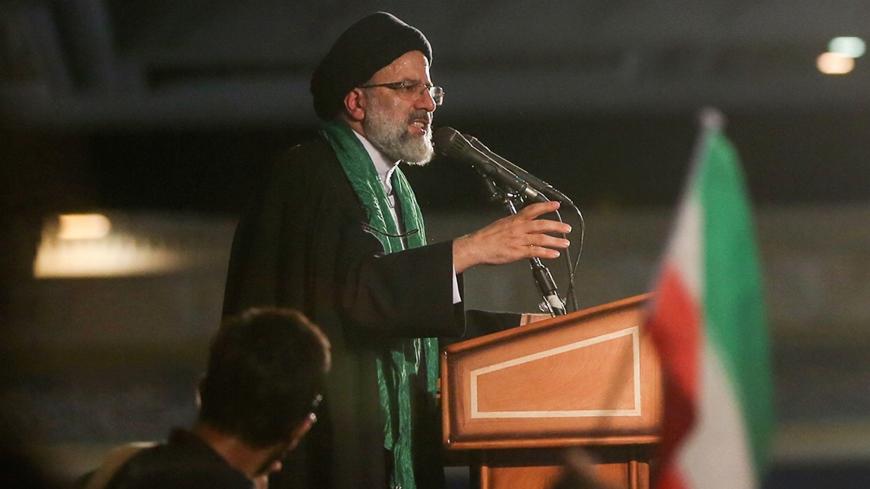 Then-Iranian Presidential candidate Ebrahim Raisi speaks during a campaign meeting at the Mosalla mosque in Tehran, Iran, May 16, 2017. - TIMA via REUTERS

Iran's hard-liners and conservatives appear to be maneuvering to jointly form a new grouping ahead of the 2020 parliamentary and 2021 presidential elections. Planning for such a move would entail resolving the differences among the senior figures of the camp.

In 2017, before the presidential elections, hard-liners and conservatives established a group called JAMNA, the Persian acronym for Popular Front of Islamic Revolution Forces. The name of the group was in line with hard-liners' attempts to label their rivals as disloyal to the pillars of the 1979 Islamic Revolution. However, this probably stemmed from their own concerns, and it was possibly just a method for making sure that votes were not lost to the Reformist-backed incumbent Hassan Rouhani.

JAMNA consisted of a large number of main conservative and hard-line parties. However, at the time, a number of parties, including the Islamic Coalition Party, were critical of the group while also joining it. Meanwhile, the hard-line and influential Endurance Front, led by Ayatollah Mohammad-Taghi Mesbah Yazdi, did not join JAMNA. While the Endurance Front and Mesbah are not popular among conservatives, they are powerful and have great influence over a number of important power centers. The reasons for this unpopularity include the front and Mesbah's lack of cooperation with their fellow parties, an issue that has been addressed by prominent hard-line Ayatollah Mohammad Yazdi, a spiritual leader of conservatives.

Ahead of the 2017 presidential election, JAMNA held an internal vote to decide whom to back. Mohammad Bagher Ghalibaf, a conservative who was then the mayor of Tehran, and hard-line cleric Ebrahim Raisi were given JAMNA approval to run for president. But the problem was that even these two senior figures were unwilling to recognize JAMNA and repeatedly stated that their decision to register to run in the elections was not rooted in JAMNA's green light.

The group was so entangled in disagreements that the other conservative candidate, Mostafa Mirsalim, a member of the Islamic Coalition Party, disregarded JAMNA’s calls for him to withdraw in favor of Raisi. Even Ghalibaf, who eventually exited the race in favor of Raisi, indicated that he didn’t care for JAMNA’s decision and signaled that his withdrawal was because of pressures imposed on him by the old guard of the conservative camp.

Now, a little over a year before the 2020 parliamentary elections, a new group has been formed under the name of the Council of Unity. The formation and function of the council were seemingly supposed to be kept as a secret, but Mosalas, a magazine close to moderate parliament Speaker Ali Larijani, has published some details about the council. What should be noted here is that Larijani has been almost banished from the conservatives' camp for his support for Rouhani during the past six years. In fact, conservatives now look at Larijani as a column of the moderation camp, which was established by the late Ayatollah Akbar Hashemi Rafsanjani.

"Reports indicate that the political summits and get-togethers have reached a good result. Seemingly, the center of this structure will be [managed] by a council tasked with seeking unity," Mosalas wrote Sept. 24.

Based on conservative figures’ statements, two dozen groups and parties have joined the council and its purpose isn’t solely electoral; it will probably act as the headquarters of the conservative camp.

Conservative analyst Naser Imani said the council will set policies, including the grand strategy of conservatives and their long-term plans. "The Council of Unity is attempting to successfully mobilize the Principlists [conservatives] and set the strategies," Imani said Dec. 8.

Apparently, a few meetings of the council have been held with the attendance of top conservative figures, including Raisi, Ghalibaf, former nuclear negotiator Saeed Jalili and three-time presidential candidate Mohsen Rezaie. However, no details of the meetings have been leaked to media.

What is important here is that the hard-line Endurance Front has also joined the council. While the group was a staunch enemy of JAMNA, it stood behind Raisi in the 2017 elections and most of the top figures of Raisi's campaign were chosen from the Endurance Front.

"I'm not aware of [the Endurance Front's possible] conditions. … However, God willing, the meetings will continue and reach a conclusion. I believe this is a wise [plan] that can have positive results," Mehdi Chamran, an attendee of the meetings, said Oct. 17.

It seems that the new conservative headquarters is determined to resolve the quarrels and disputes plaguing the camp prior to the upcoming elections. If the council is successful, other conservative groups — including JAMNA — likely would be dissolved or at the least turned into a subset of the council. However, the statements of a figure close to Ghalibaf indicate that the council may not reach its goals.

Hossein Ghorbanzadeh, an adviser to the former Tehran mayor, confirmed his superior’s attendance at the council's meetings along with Raisi and other conservative figures, and described the gatherings as aimed at "consultations": This is a word that may signal that the council is not being taken seriously or that a number of top conservatives are not willing to limit themselves to its decisions.

"Right now, people … don’t care about Principlism or reformism. When the purchasing power of people declines by one-third in six months, we should not expect them to come and say that they [love] this or some other current," Ghorbanzadeh said Dec. 9. Of note, following the 2017 presidential elections, Ghalibaf raised the topic of "new conservatism," slamming the top decision-makers of the camp and asking for urgent reform within the current.

Indeed, disagreements over initial issues may have already erupted and disrupted the council's activities. According to the moderate Nameh News site, the council was supposed to release its first public statement Nov. 4, but this plan did not go forward as expected — an issue confirmed by Chamran, who said the statement was not issued owing to "lack of time for coordination."

While the top figures of the conservative camp are supposed to sit around the Council of Unity's table, it seems that they have a bumpy and difficult road ahead as they have serious disagreements with one another. Against this backdrop, one can only wait and see what unfolds in the coming months.