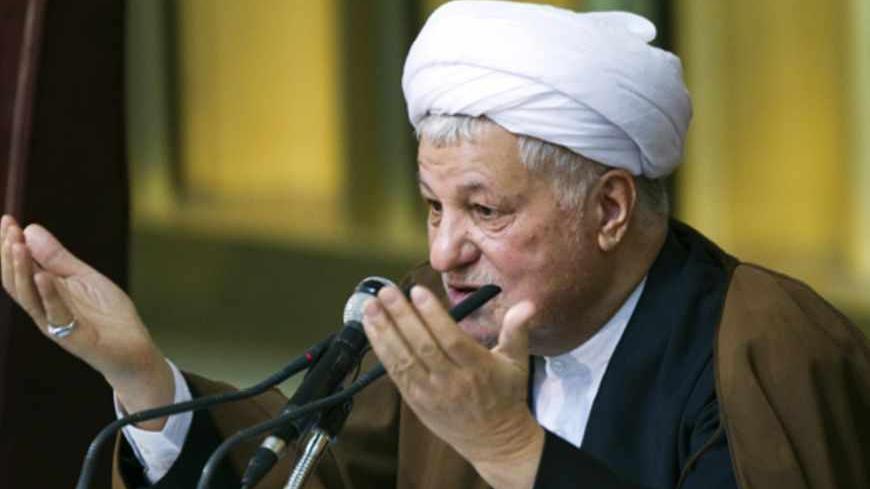 On May 11, in the last moments before the registration deadline for candidacy, Ayatollah Hashemi Rafsanjani registered to run in the elections. The news immediately became the headline of popular Iranian websites. Rumors spread inside and outside of Iran that the reason for Rafsanjani’s late registration was the last-minute registration of Esfandiar Rahim Mashaei, who is endorsed by Rafsanjani’s bitter enemy, [Iranian President] Mahmoud Ahmadinejad. But news leaked from Rafsanjani’s office exposing something different.

Gholamali Rajaei, member of Rafsanjani’s office, and his aide reported his observations of the last day of registration as follows: On Saturday morning [May 11], Rafsanjani was frequently asked whether he would run in the elections, to which he declared, “I have to consult with the supreme leader. If he remains silent I will run, but if he disagrees, I will definitely not run.” Rajaei said that at 5 p.m., an hour before registration ended, Rafsanjani proclaimed that he was “still waiting for the leader.” Rajaei added that “he [Rafsanjani] was told that if he doesn’t run it is good that he issues a statement and tells the people the reason. … He accepted and told us to prepare the text. We went to the adjacent room and started preparing the text.”

Rajaei described the last moments: “It was around 5:30 p.m., and the text was about to be finalized when Mr. Alikhani (Rafsanjani’s parliamentary adviser) came to our door and yelled, ‘Mr. Rajaei, he left for registration; don’t stay behind!’ I couldn’t believe it. I grasped in a call with an influential member of the leader’s office that there had been some exchanges and he had not felt any disagreement from the leader’s side.” Rafsanjani’s daughter Fatemeh revealed that even though they were almost certain that her father would not register, suddenly after a telephone conversation at 5:30 p.m. he said, “Bismillah [In the name of God], let’s go.”

With Rafsanjani’s registration for the elections, experts inside Iran now see the main candidates as Mashaei, the candidate of the 2+1 coalition, Rafsanjani and Saeed Jalili. Heated discussions are also underway about the approval or disapproval of Mashaei’s candidacy. Some believe that a fear of Ahmadinejad’s reaction to Mashaei’s disapproval — especially before the elections in a country that must remain calm — would result in the Guardian Council’s approval of his candidacy. But opponents of this view have a stronger argument. They point to Ayatollah Khamenei’s order in 2009.

In the year after Ahmadinejad appointed Mashaei as his first vice president, Ayatollah Khamenei sent a letter to Ahmadinejad asserting, “Appointing Mr. Esfandiar Rahim Mashaei as your vice president is against your interests and those  of the government; therefore, it is necessary that this appointment be nullified.” This group argues that it is not possible for a person who was disapproved by the leader to be vice president to be approved for the presidential race by the Guardian Council that vets presidential candidates. They also argue that Ahmadinejad is in such a weak position that he is not capable of radical reactions and that if he were to cross his boundary, the system could even react against him to the point of there being an unofficial house arrest.

Before Rafsanjani and Mashaei entered the race, the 2+1 coalition that included Tehran Mayor Mohammad Bagher Ghalibaf, Gholamali Haddad Adel and Ali Akbar Velayati was planning to select one person for the final race. But developments on the last day of registration created a new situation so that Velayati and Haddad Adel announced that it is possible that all principlists might need to withdraw in favor of one person, preferably Saeed Jalili. Ultimately, the principlists need to gather around a person who is not only in line with the leader but is also publicly popular to be able to compete against Rafsanjani.

There are two considerable choices before the principlists: Ghalibaf and Jalili. Most polls show that Ghalibaf is certainly the most popular figure among principlist candidates. Yet, there are two barriers before him. Some principlists see him as a technocrat, which, from the viewpoint of the principlists, means being distant from fundamental religious values. Second, Al-Monitor’s sources assert that Ghalibaf has a strong, firm and dictatorial personality — traits that are compatible with his military background as a former Iranian Revolutionary Guard Corps commander. This is a red flag for principlists because in the case of Ghalibaf’s election, there is the chance of another Ahmadinejad being born who will oppose the supreme leader.

On the other hand, Saeed Jalili is a person in whom Iran’s leader has previously put his full confidence. Jalili has been leading Iran's nuclear negotiations with world powers, not only as the head of the negotiating team but also as the leader’s personal representative. Jalili’s problem is that he holds no considerable position in any polls; in other words, he has no popular support. Therefore, the principlists are at a crossroads. The situation might result in the principlists not coming to a final consensus and both Ghalibaf and Jalili running in the election.

It seems that the final race will be between Rafsanjani on one side and the candidate(s) of the principlists on the other. Between Ghalibaf and Jalili, Ghalibaf is the competitor who could pose a threat to Rafsanjani if he does not withdraw.

Considering the support of the Consulting Council of the Reformists headed by Khatami, as well as Rafsanjani’s position after the 2009 election in favor of the Green Movement, he will be able to receive a great number of votes from supporters of the reformists. In addition, Rafsanjani will be able to attain a portion of the moderate conservative votes.

Jalili will not be able to defeat Rafsanjani only with the vote of the radical conservatives. Sadegh Zibakalam, analyst and academic in Tehran, posits that the popular support of this group is about 5 million to 7 million votes. He says the principlists’ only chance against Rafsanjani is Ghalibaf. Because of his technocratic characteristics, Ghalibaf is able to win a portion of the middle and liberal urban class.

In conclusion, one can say that if Ghalibaf withdraws in favor of Jalili, Rafsanjani’s chance for succeeding will be very high. However, if Ghalibaf stays, we must wait and see what Jalili decides. If he also stays in the race, the principlist vote will be divided among the two of them and the prospect of Rafsanjani’s victory will be higher. If Jalili withdraws in favor of Ghalibaf, though, we will witness a tight race between Ghalibaf and Rafsanjani. In that case, the result will not be an easy guess, especially considering the common saying that “In Iran, everything is decided at the last minute.”