Two months before Iranian presidential elections, the political factions are still in disarray in their search to put forward a winning candidate, writes Shahir ShahidSaless. 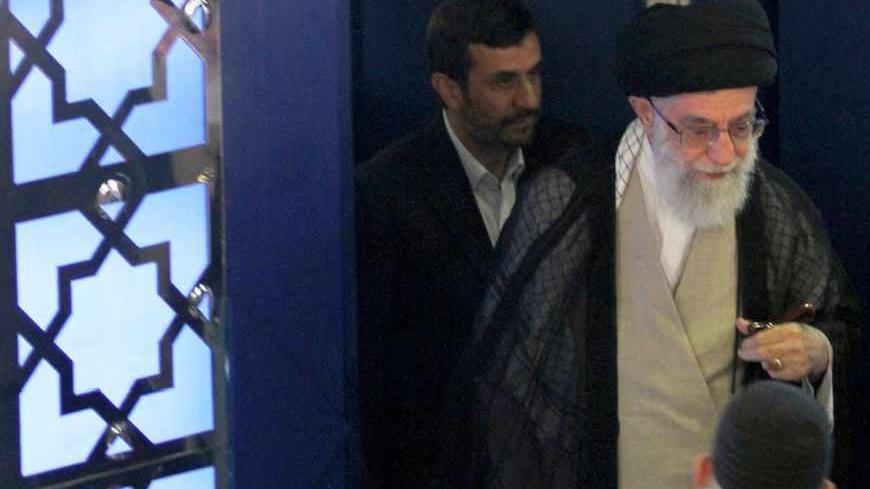 Two months before Iran’s scheduled June 14 presidential elections, the country is quiet, unlike four years ago, with no sign of public enthusiasm or anticipation. Instead, confusion best characterizes the environment. It reigns among politicians as well as the people, in all walks of life, despite Ayatollah Ali Khamenei’s constant emphasis on the necessity of having a “vibrant election” to confront foreign threats and sanctions. On March 2, he asserted, “Vibrant elections will give the enemy a punch on the mouth.”

For previous elections, the Interior Ministry had been tasked with planning and supervision. In January 2013, however, a new law was enacted that made elections the purview of the Central Executive Election Board, comprised of 11 members, including representatives from the three branches of government and a number of national political, social and cultural figures. Some observers in Iran believe this change was a preemptive measure aimed at preventing President Mahmoud Ahmadinejad from using the Interior Ministry to manipulate the presidential election in favor of his camp’s candidate.

That said, the interior minister, whose duties also include appointing provincial and city governors, will nonetheless lead the new election board. Meanwhile, the governors are tasked with organizing and reporting election results for their jurisdictions. Therefore, in practice, the Interior Ministry still has the potential to exert its influence over the outcome of the elections. According to the popular Iranian website Baztab, Ahmadinejad’s relentless efforts to replace Interior Minister Mostafa Mohammad-Najjar, who is siding with the supreme leader, have so far been blocked by Ayatollah Khamenei.

Ahmadinejad’s favored candidate is Esfandiyar Rahim Mashaei, his long-time top aide and confidant. In the waning months of his presidency, Ahmadinejad’s highest priority has revolved around creating an appealing popular image for Mashaei as well as forcing the Council of Guardians, which vets candidate, into a position of having to qualify him to run for the presidency. This is a difficult undertaking. Many analysts believe that Ahmadinejad seeks to implement a scheme similar to one used by Vladimir Putin and Dmitry Medvedev in Russia to return to power in four years.

In 2009, Ahmadinejad appointed Mashaei as his first vice president, but was forced to backtrack on Ayatollah Khamenei’s hukm (order). Different reasons have been suggested for the ayatollah’s move. Mashaei’s critics, mainly conservative clergy, discredit him as the mastermind of the “deviant current” that seeks to promote nationalistic values and Iran’s pre-Islamic heritage, thus undermining the clergy’s authority and Iran’s theocratic nezam (political system).

The majority of experts inside Iran firmly believe that the Council of Guardians will disqualify Mashaei without hesitation because of the conservatives’ negative view of him and because the supreme leader has already rejected him for a lesser position, the vice presidency. One informed source in Iran told Al-Monitor, however, that Mashaei’s disqualification is not as simple as many think.

“Ahmadinejad is a fighter and also unpredictable,” he said. “In the heat of the elections, he may resign at huge cost to the government both domestically and internationally. His resignation would be a clear indication of instability and fierce factional infighting over power within Iran.”

Given Ahmadinejad’s disastrous presidency, it is understandable to ask whether his right-hand man has a chance of being elected even if he passes the Council of Guardian’s test? Surprisingly, the answer is yes. In response to the social restrictions imposed by the Islamist government, a large segment of the middle class is supportive of Persian, pre-Islamic culture and values, especially in the large cities. Mashaei’s campaign platform will most likely promote these values, thus making him a contender, at the least, if not the winner, in the presidential race.

The reformists are also in a state of confusion. Two months before election day, it is not yet clear who will represent them or whether they will put forward a candidate at all. Other than Mohammad Khatami, Iran’s former reformist president and their most popular potential candidate, no one has a chance of being approved by the Council of Guardians. This, obviously, presents a major problem.

Before the Iranian New Year (March 21), some sources in Iran had hypothesized that Khatami would run. According to the latest information from these same sources, however, after several meetings with his advisors and his former team, Khatami has decided not to run. It is their assessment that the reformists have concluded that if Khatami enters the race and is disqualified by the Council of Guardians — a fierce rival of the reformists — the image of the nezam will be greatly damaged, as the supreme leader’s claim of the elections being free would be thoroughly discredited. Khatami, it is said, does not want to inflict political costs on the system in these difficult times.

Furthermore, Khatami’s disqualification by the council would put all the reformists outside the system and give them the status of the opposition, a notion that Khatami unequivocally wants to avoid; while he has differences with the ruling elite, he is not against the system as a whole. Sources maintain that he plans to run only if he is assured of not being disqualified.

The conservatives, or so-called principlists, who now hold power, are no better off than their rivals in terms of confusion. Several candidates, coalitions and voices in their camp have made them look lost and perplexed. Their most pressing problem is that they do not have a charismatic personality to represent them. Their only option in this regard is Mohammad Bagher Ghalibaf, a former commander in the Revolutionary Guards and the current mayor of Tehran.

Traditional conservatives have voiced the concern that Ghalibaf’s strong personality might reflect his potential to become another Ahmadinejad in challenging the authority of the supreme leader. To avoid such a risk, experts in Iran maintain, the principlists may instead prefer to run Ali Akbar Velayati, former foreign minister and a top advisor to the supreme leader. To fill the charisma gap, as he has implicitly acknowledged, he might follow the US model and introduce Ghalibaf as his vice president.

Abbas Abdi, a well-known reformist activist, journalist and mastermind of the 1979 storming and takeover of the US Embassy in Tehran, maintains that Iran’s current situation is so uncertain and vague that “any outcome in this environment is possible.”  All in all, however, one outcome is undeniable: If Khatami runs, no one will be able to defeat him.

Shahir ShahidSaless is a political analyst and freelance journalist, writing primarily about Iranian domestic and foreign affairs. Email him at shahir@iranamerica.org.