Iran's presidential candidate Hassan Rouhani's outspokenness on important issues could propel him to the presidency at the last minute. 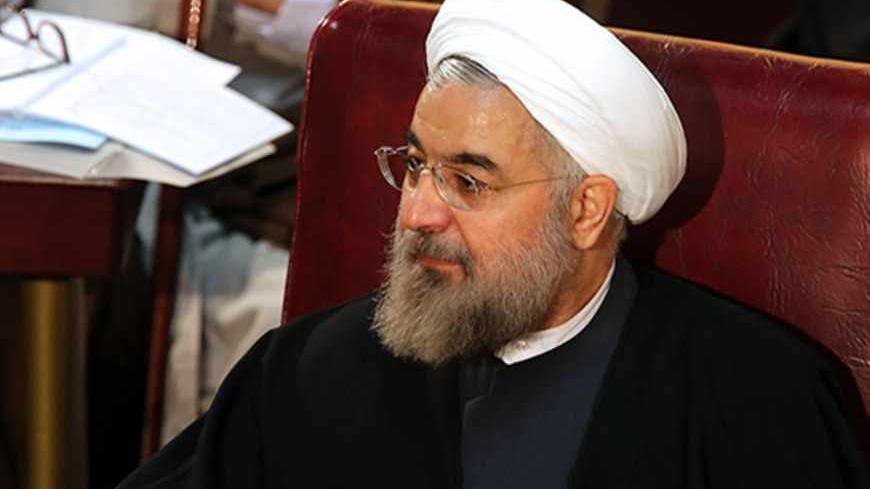 Iran’s presidential elections are full of surprises, from Mohammad Khatami’s landslide victory in 1997 to Mahmoud Ahmadinejad’s rise to the presidency in 2005 to former President Hashemi Rafsanjani’s shocking disqualification this year.

What do they tell us about this year's election?

Until a few days ago, most surveys designated Tehran Mayor Mohammad Bagher Ghalibaf as the unrivalled candidate of this round of elections. Yet, another figure is being discussed as a contender for Ghalibaf. In one of the latest polls, Hassan Rouhani, who stands somewhere at the border of the two camps of principlists and reformists, was ahead of Ghalibaf by 23.3% to 18.4%. Al-Monitor sources attribute this poll to a university center.

In many ways, Rouhani is a fascinating character. Although he is close to the reformist Khatami and the moderate Rafsanjani, he is also the representative of the supreme leader, Ayatollah Ali Khamenei, in one of the most profound centers of decision-making, the Supreme National Security Council. This fact has resulted in him serving during the eight-year presidency of Khatami, as well as the eight-year presidency of Rafsanjani, as the secretary of the National Security Council. He has also served as a member of parliament, heading its foreign policy committee, and has spent 20 years on the Expediency Discernment Council — which continues to this day; he is currently the representative of the people of Tehran in the Assembly of Experts of the Leadership.

Rouhani has gathered a rather unusual mix of religious degrees, as high as Ijtehad (an Islamic scholar who's competent in interpreting Sharia) as well as someone with a doctorate in law from the Caledonian University in Glasgow. But what has facilitated Rouhani, a lesser-known figure, to be unexpectedly considered as one of the major contenders in this year’s election?

This might be because Rouhani has new things to say. He believes that freedom of press, Internet access and national radio and television are the main elements that can stop economic corruption. Consequently, and very smartly, he connects the issue of freedom with that of economy. “We should facilitate our relationship with the rest of the world," he says. "The time has passed when we could put a fence [around us] and say we only care about ourselves.”

During a campaign interview, he voiced a rather unusual and unprecedented opinion, which is clearly the opposite of what foreign analysts believe to be the case, when he divulged to a group of journalists: “You say that the president and his government does not have any say in foreign policy and [only] the supreme leader does, but that is not true.” His analysis is noteworthy. Rouhani points out the differences among the foreign policies of the governments of Rafsanjani, Khatami and Ahmadinejad and considers them to be clear evidence that the presidents are influential in foreign policy decision-making despite that the final say lies with Khamenei. He asserts, “The leader has been the same,” so if the governments were not impacting the foreign policy, how one can explicate the differences?

Recently, in another interview, he gave a new stance regarding the Iran-US relations. He maintained: “We should have started the policy of defusing tension with the United States 10 years ago. Now, we are in the stage of hostilities … we must first diminish the hostilities back to tension and then try to defuse it.”

Another of his desirable promises for the young urban populace is “I will restore the respect of the Iranian passport [that it once had].”

A few developments can proliferate Rouhani’s chance of winning the election. If the other moderate/reformist candidate, Mohammad Reza Aref, who shares many views with Rouhani, withdraws from the race, it would be in Rouhani’s favor. Otherwise, they'll split the reformist/moderate votes and diminish Rouhani’s chances.

Rouhani could also receive strong support from Rafsanjani and Khatami. None of the polls indicate that any of the candidates will gain more than 50% of the votes and win the polls in the first round — which means Rouhani must be one of the two candidates who qualify for the run-off. Until now, both Khatami and Rafsanjani have refused to openly support Rouhani. They believe if they support him strongly, his possible defeat will result in the principlists claiming a massive loss for the entire moderate/reformist camp.

However, analysts inside Iran believe that if Rouhani qualifies for the second round, both Khatami and Rafsanjani are prone to take that risk and offer public backing.

When just two candidates are competing, support of these figures can channel a considerable number of votes, from the moderate and the reformist backers, toward Rouhani. Such events can be determinant in the results and send Rouhani on his way to Pasteur Street, the Iranian presidential compound.

But before anything else, we should wait and see if Rouhani can qualify for the run-off.

Whether or not the surveys are accurate, history indicates that the Iranian elections tend to be determined at the last minute.

Shahir ShahidSaless is a political analyst and freelance journalist, writing primarily about Iranian domestic and foreign affairs. He lives in Canada. Email him at shahir@iranamerica.org