Is Rafsanjani’s Disqualification A Signal to US?

The disqualification of former Iranian President Hashemi Rafsanjani as a candidate in this year’s election may be about more than Iranian domestic politics. 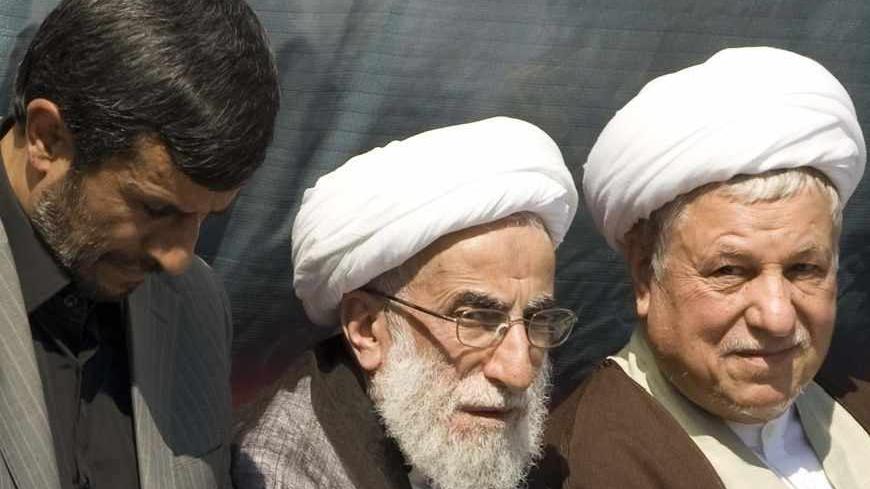 Of the 686 applicants who registered for the upcoming June 14 presidential election in Iran, the Guardian Council, which moderates the candidates, approved eight. Two of these candidates, Mohammad Reza Aref and Hassan Rouhani, are on the borderline between reformists and principlists (conservatives); the other six are considered principlists.

Akbar Hashemi Rafsanjani’s last-minute registration before the deadline had two major impacts. First, it unexpectedly rallied Iranian society, which had been in a state of lethargy and indifference toward the elections. Middle-class urbanites’ dissatisfaction with President Mahmoud Ahmadinejad’s policies combined with the support of popular former President Seyyed Mohammad Khatami and the reformists’ camp for Rafsanjani, plus Rafsanjani’s relentless position against Ahmadinejad’s policies over the past few years, helped bring about Rafsanjani’s sudden wave of popularity and contributed to public energy and excitement.

Second, Rafsanjani’s sudden entrance into the race surprised and shocked the principlists. They did not expect Rafsanjani to run for president, nor did they expect the climate that followed his registration, that is, a vast and vivid support from a large portion of society.

For a couple of days, they were in a state of shock. Later, the ultra-conservative faction of principlists regrouped and began massive attacks against Rafsanjani. Kayhan, the daily with Hossein Shariatmadari as editor in chief, became the leader of this battle. In an article, Shariatmadari introduced Rafsanjani as the United States’ preferred candidate of choice and asserted, “From the West’s viewpoint, Mr. Rafsanjani as a moderate figure is the best choice for Iran’s future presidency.”

The most controversial attack came in Tehran’s Friday prayers from Ayatollah Ahmad Jannati, who, as the chairman of the Guardian Council tasked to vet the candidates, is supposed to be impartial. He said, “A president must live a simple life. ... A person who speaks of living a simple life but rides in a [Mercedes] Benz doesn’t understand the people’s pain when they’re hungry and doesn’t sympathize with the lower classes.”

News of Rafsanjani’s disqualification moved the shock from the principlist front to the reformists and moderates. Rafsanjani did not hide his surprise and responded, “We could not imagine this situation.” Rafsanjani has had prominent positions on his resume, including chairman of parliament, president, chairman of the Assembly of Experts, and is currently chairman of the Expediency Council. During the eight years of war with Iraq, he was considered the most influential person after Ayatollah Ruhollah Khomeini, leader of the Islamic Revolution. In 1988, he had an integral role in convincing Ayatollah Khomeini to end the war with Iraq.

Speaker of the Guardian Council Abbas Ali Kadkhodaie indirectly mentioned Rafsanjani’s age as the reason for his disqualification. Rafsanjani is 78. Observers believe that his age is a mere excuse and the underlying reason is that the radicals seek to stay in power and prevent moderate figures from having influence in Iran’s politics. Rafsanjani’s supporters believe his disqualification was due to his popularity.

Majid Ansari, former member of parliament and a known reformist cleric, declared on Thursday, “When they (principlists) read the news that Hashemi (Rafsanjani) will definitely have 57% of the votes and possibly another 10% to 15% and will win by 70% in the first round of the election, they decided to interfere with the election process.”

Not long after the news of Rafsanjani’s disqualification was released, Ayatollah Khomeini’s daughter Zahra Mostafavi, in an unprecedented move, published an open letter to the supreme leader of the Islamic Republic and requested Ayatollah Ali Khamenei to interfere and “prevent dictatorship” by returning Rafsanjani to the election.

For the first time, Mostafavi revealed that her father had recognized Rafsanjani as being qualified to become the leader of the Islamic Republic. She wrote, “On the same day that I heard your approval for leadership from Imam (Ayatollah Khomeini), that I have repeated the case in many instances, I also heard the approval of Brother Hashemi whose name was mentioned after yours. Fortunately and justly, you were approved by the Assembly of Experts; therefore, I’d felt no need for mentioning his name before.”

The June 14 election will be held as US policies toward Iran have become more aggressive than any time in the past 34 years while tension between Iran and Israel and Iran and the Arab countries is at its peak. Rafsanjani’s presence in the upcoming election could have been significant in two ways.

First, a large turnout in the election could have helped repair the legitimacy of the state, which was damaged after the disputed 2009 presidential election. This could strengthen Iran’s position in negotiations with the United States and other Western countries. Second, Rafsanjani’s victory could have been interpreted as a signal to the West and especially the United States that if they intended to solve the dispute over Iran’s nuclear issue in honesty, they could use the opportunity to do so, thus preventing a likely devastating military conflict.

However, Rafsanjani’s absence from the election (unless in the next few days there is a command from Ayatollah Khamenei for his return) conveys the opposite message. That message is that the ruling elite sees no value in a high rate of citizen participation in the election and in repairing the government’s image, and also that the country’s leadership intends to continue the policy of “confrontation without compromise” with regard to the nuclear issue.

The two moderate candidates, Aref and Rouhani, do not have much chance of winning. They are not well known by the public and it is not likely that Rafsanjani and Khatami will use their popularity to support them because the candidates’ loss would then be conveyed as the overall defeat of the reformist and moderate camps.

While Saeed Jalili, Secretary of the National Security Council and the nuclear negotiating team, and Mohammad Bagher Ghalibaf, mayor of Tehran, have a greater chance of winning than the others, selecting either will not bring about any sensible change, at least in Iran’s foreign policy. If this holds true, it remains to be seen whether the United States will utilize the situation after Rafsanjani’s disqualification — and the frustration of a large cohort of Iranian society — and elevate the human rights issue to the top of its agenda, thus further increasing pressure. There are signs that may support this thesis.

In response to the Guardian Council’s decision, US top diplomat John Kerry stated, “The council narrowed a list of almost 700 candidates down to ... officials of their choice, based solely on who represents the regime's interests, rather than who might represent some different point of view among the Iranian people.” He added, “The lack of transparency makes it highly unlikely that that slate of candidates is either going to represent the broad will of the Iranian people or represent a change.”