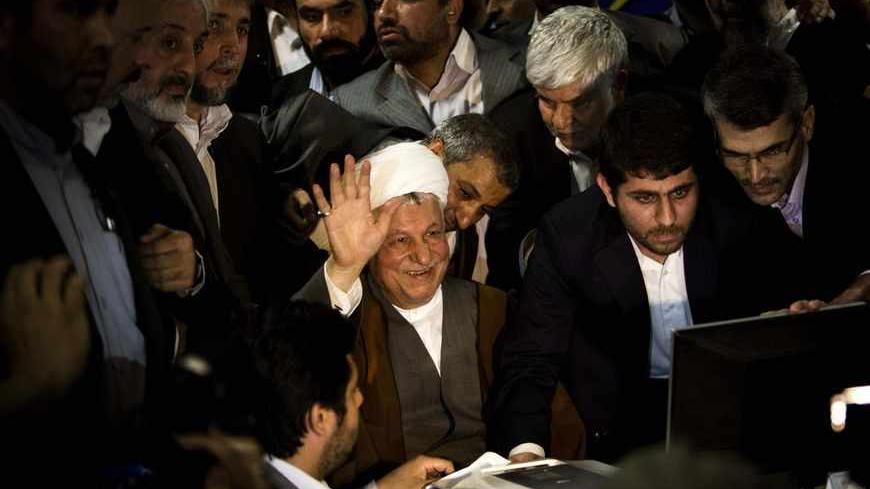 Former Iranian President Akbar Hashemi Rafsanjani (C) waves as he registers his candidacy for the June 14 presidential election at the Interior Ministry in Tehran, May 11, 2013. - BEHROUZ MEHRI/AFP/Getty Images

Saturday, the last day of registration for presidential hopefuls in Iran, did not lack for twists and surprises. The two leading members of the 2+1 coalition, Tehran Mayor Mohammad Bagher Qalibaf and former Foreign Minister Ali Akbar Velayati, finally signed up, as did chief nuclear negotiator Saeed Jalili. At the very last minute, ex-President Akbar Hashemi Rafsanjani and former chief of staff Esfandiar Rahim Mashaei also showed up to register as candidates.

The situation is that there are now figures from across the political spectrum in the fray. The 2+1 coalition, which also features former parliament Speaker Gholam-Ali Haddad Adel, is widely seen as enjoying the backing of Iran's supreme leader, Ayatollah Ali Khamenei. There is a separate so-called ‘principlist’ coalition led by former Foreign Minister Manouchehr Mottaki. Moreover, several members of the camp of President Mahmoud Ahmadinejad, chief among them his right-hand man Mashaei, have registered. Lastly, in addition to the centrists/reformists, led by Rafsanjani, there are some independent figures.

In other words, after years of increasingly factional infighting, all the ingredients for a vicious campaign season are at hand.

There are two filters which will likely act to stabilize the playing field for the June 14 election.

The Guardian Council will weed out most political players and likely limit the number of hopefuls allowed to run to less than a dozen. In parallel, as witnessed in the past months, the process of coalition-building is likely to continue and accelerate. This will act as a separate filter coalescing the various political figures at play.

In this equation, the main questions are whom the 2+1 coalition will appoint as its final candidate, whether the reformists will rally around Rafsanjani, and whether Mashaei will be allowed to run.

The 2+1 coalition has insisted on that its most popular candidate will be its final choice. So far, all polls have consistently put Mayor Qalibaf horse lengths ahead of Velayati and Haddad Adel. Yet, since the impetus for the 2+1 was Ahmadinejad’s presidency, it’s possible that the coalition’s desire to take advantage of Qalibaf’s popularity while at the same time limiting his options could mean that he won’t be picked as the final candidate. This was a scenario even before Rafsanjani and Mashaei entered the fray. Now, there is real anxiety about the prospects of the 2+1.

In the days prior to his registration as a hopeful, Rafsanjani openly stated that he would not go ahead and join the race without the supreme leader’s consent. Considering how Mashaei registered only moments before Rafsanjani, just before the deadline, a condition for Rafsanjani’s candidacy is arguably the presence of Mashaei. Indeed, it wouldn’t be a surprise if both of them sat in cars parked near the downtown Interior Ministry, waiting for each other’s next move. Flowing from the latter is the logic of “either both in, or both out.” Underlying this rationale is the likely calculation that they will balance out each other; splitting anti-establishment votes, thereby elevating the 2+1. In parallel, this would achieve the objective of boosting voter turnout, seen by some as perhaps being equally important as the name of the next Iranian president.

Rafsanjani may very well take action to preempt this scenario. In the past, he has repeatedly brought up the establishment of a national unity government as the way forward. Considering his long relationship with establishment figures such as Velayati, it wouldn’t come as a complete surprise if he engaged in talks with the 2+1 coalition. Setting up an alliance with the latter would establish Rafsanjani as a kingmaker, guaranteeing figures close to him such as Rouhani and Expediency Council secretary Mohsen Rezaei heavy posts in the next government. In other words, it would allow 78-year-old Rafsanjani to safely back down while retaining his influence. Following the logic of “either both in, or both out” in regard to his dynamic with Mashaei, this scenario would also rid the Ahmadinejad camp of its strongest candidate, leaving it vulnerable to an unrelenting principlist-centrist coalition.

Indeed, Ahmadinejad seems to have prepared for this by presenting multiple members of his camp rather than Mashaei alone. There are, however, several obstacles to this scenario. Chief among them is the prospect of failed coalition building leading to a chaotic, free-for-all battle in the first round of polling. "Despite reports of Rouhani stepping aside after Rafsanjani’s registration, sources close to the former nuclear negotiator’s campaign tell Al-Monitor that no such decision has officially been made.

Regardless of whether Rafsanjani forms an anti-Ahmadinejad alliance with the 2+1 coalition, or runs on a reformist-centrist platform, it is clear that this year’s election will be electric. There are sharp divides between the various camps. And as the experiences of 2009 show, the mobilization set in motion by the various campaigns can gain a life of its own.

Indeed, soon after Rafsanjani registered, crowds of his supporters gathered outside the Interior Ministry, chanting “Blessings to the prophet, the nation’s savior has come.” As some youngsters tried shouting slogans in favor of Mir Hossein Mousavi, the former presidential candidate under house arrest, their calls were left unheard and quickly went quiet. Moments later, the crowd chanted “Security forces, thank you, thank you!”  In what could be an ominous sign, the New York Times correspondent in Tehran, present at the Interior Ministry, tweeted first-hand accounts of several fistfights breaking out between pro- and anti-Mashaei people inside the building.

In this environment, the forces unleashed by pre-election mobilization should be viewed as a double-edged sword that could either boost or threaten the Islamic Republic’s legitimacy. The battle for the presidency is not just about the executive branch, but the future direction of Iran as a whole.

Mohammad Ali Shabani is a doctoral researcher at the School of Oriental & African Studies, University of London and editor of the Iranian Review of Foreign Affairs. He has worked in media organizations and think tanks in Iran. He tweets as @mashabani.