Despite hopes that the private sector would prosper under a new administration, the Islamic Revolutionary Guard Corps' construction firm Khatam al-Anbia has continued to receive large government projects. 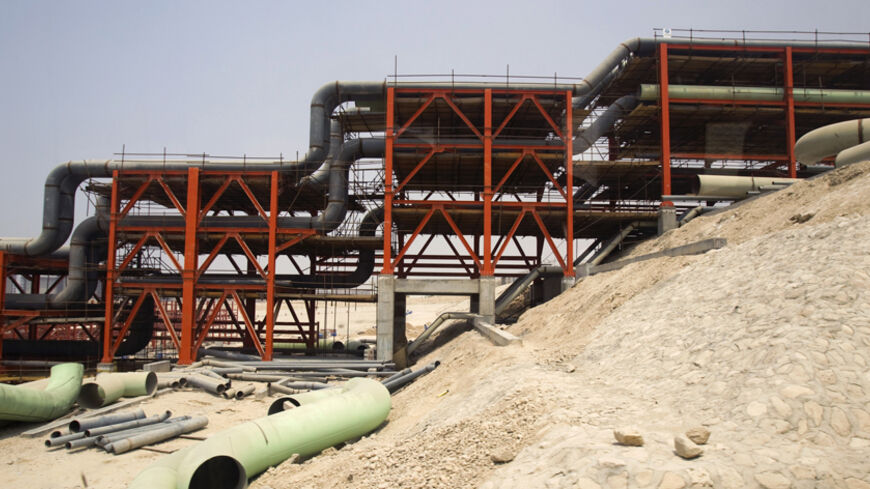 When the Iran-Iraq war ended in 1988, much of Iran’s infrastructure was either ruined or neglected. Reconstruction started immediately, but neither the private nor the public sector were capable of compensating for all the destruction that occurred during the war. This is where Khatam al-Anbiya (Seal of the Prophets) came in.

Today, 26 years after the end of the Iran-Iraq war, no one can doubt that the Islamic Revolutionary Guard Corps (IRGC) is one of the most important macroeconomic forces in the country. Khatam al-Anbiya, the main economic arm of the IRGC, was officially founded after the war on the orders of Supreme Leader Ayatollah Ali Khamenei.

Mohsen Rezaee was the first commander of this military-economic base and gave it the nickname “Ghorb,” its acronym in Arabic. He was succeeded by Cmdr. Rahim Safavi, followed by Mohammad Ali Jafari and finally Rostam Ghasemi. Currently, Khatam al-Anbiya Construction Headquarters is headed by commander Abdollah Abdollahi.

Khatam al-Anbiya’s is mostly involved in civil projects such as road construction, dam building, gas line construction and the expansion of gas and oil fields. In an Oct. 11 interview with Fars News, Abdollahi said, "Khatam al-Anbiya has 135,000 personnel,” and added that 5,000 contractors are collaborating with Khatam al-Anbiya.

“So far, God be praised, we have been successful in all our projects,” Abdollahi said.

However, not everyone feels that way. An economic journalist in Tehran told Al-Monitor on condition of anonymity, “Khatam al-Anbiya is the unrivaled king of Iran’s private sector economy.” Of its fortunes during the last 26 years, he said, “IRGC started its economic activities during Ayatollah Hashemi Rafsanjani’s presidency, but lost some of its influence during Mohammad Khatami’s presidency. However, it reached the top during [President Mahmoud] Ahmadinejad’s time in office.”

It was during Ahmadinejad’s presidency that Khamenei began focusing on Article 44 of the constitution, which addresses privatization, to legalize the limitless economic activities of the IRGC. Ahmadinejad, who had close ties with the IRGC, enthusiastically supported these changes. During his presidency, privatization meant giving all the important projects to the Khatam al-Anbiya base, the journalist said.

The projects awarded to the Khatam al-Anbiya between 2005 and 2011 are worth more than $25 billion. According to Kalameh, which has close ties with former Prime Minister Mir-Hossein Mousavi, “Not even the biggest oil cartels in the world, which have decades of experience and access to not only the best and most up-to-date technology in the world but also to the most specialized and skilled human forces, cannot receive and successfully complete this many projects in such a short period of time.”

In summer 2011, Ahmadinejad decided to put Rostam Ghasemi, then commander of the Khatam al-Anbiya, in charge of the Ministry of Petroleum, Iran’s richest ministry. The conservative parliamentarian from Tehran, Ali Motahari, opposed this appointment and so did Alef, which is linked to another parliamentarian representing Tehran, Ahmad Tavakoli.

Motahari accused the IRGC of winning all the important civil projects in an “unfair” competition and said, “Adding the oil projects to all the already existing projects will not end the accusations.”

Abdollahi said, however, that the IRGC does not take possession of all the projects, explaining, “From time to time, there were projects that others could take on and we did not even bid for them.”

Three years ago, Jafari said this military organization would only take on economic projects that are over $30 million.

In the 2013 presidential elections, Hassan Rouhani was supported by both the moderates and the Reformists. The Principlist candidates, including Secretary of the National Security Council Saeed Jalili and Tehran Mayor Mohammad Bagher Ghalibaf, both former members of the IRGC, were defeated.

It appeared at the time that Rouhani’s administration might be able to limit the IRGC’s economic activities and allow nonmilitary organizations to enter Iran’s economic circle.

However, in May 2014, Mohammad Bagher Nobakht, the administration’s spokesman and head of Management and Planning Organization, gave a speech in which he said Rouhani’s administration was willing to entrust major economic projects to the Khatam al-Anbiya. “Major projects that cannot be completed by the private sector should be given to the IRGC,” he said. “We will give these projects to the armed forces and especially to the Khatam al-Anbiya.”

A month prior to this, Jafari had clearly expressed his disappointment with the lack of collaboration between the administration and the IRGC. He said, “Unfortunately, the administration was not supportive of the suggestions made by the Basij about the resistance economy. We hope that in future the administration utilizes the abilities of both the IRGC and Basij and the massive human resources available.”

On Sept. 16, 2013, during the 20th IRGC National Assembly of Commanders and Officials, Rouhani had suggested that the IRGC should concentrate on the economy instead of entering “political games” and said, “These rumors about the IRGC are baseless. They want to cast the IRGC as the rival of the people, but the IRGC is not a rival for the private sector. It is not and has never been a regular contractor. Today, the IRGC should take on important economic projects that the private sector is not capable of managing.”

He believes that in the short term, Rouhani will have good relations with IRGC commanders. “It is possible, however, that he might try to change the game, and take back the major projects awarded to the Khatam al-Anbiya base after an agreement is signed. This is a very risky move and we can’t know if Rouhani is capable of pulling it off.”

Despite the change in the administration, IRGC’s Khatam al-Anbia is continuing to get major projects. On Sept. 17, Jafari said that despite “doubts in the beginning,” there is “good cooperation and interaction” with the administration. According to reports, Khatam-al-Anbiya recently signed a contract with the mayor of Tehran worth approximately $7 billion.