The burial of Iranian veterans, 175 of them buried alive, has stirred painful memories and united Iranians. 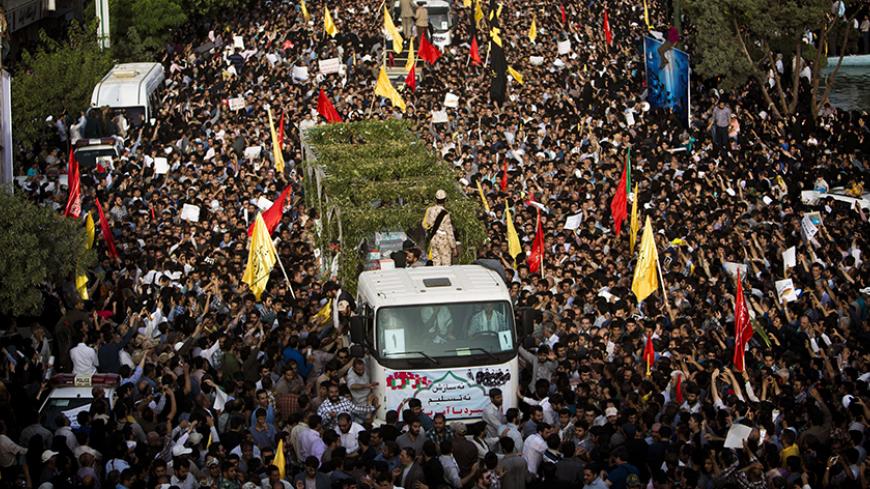 Iranians follow trucks carrying coffins during a funeral procession for 270 victims of the Iran-Iraq War, 175 of them Iranian combat divers, a month after their bodies were repatriated to Iran, June 16, 2015. - Getty Images/Behrouz Mehri
Arash Karami
@@thekarami
June 17, 2015

Iran’s supreme leader, Ayatollah Ali Khamenei, praised the large turnout June 16 for the Tehran funeral of 270 veterans from the Iran-Iraq War as being “one of the most memorable events of the revolution.” The return of Iranians killed during the war with Iraq during the 1980s is not new. But this funeral consisted of 175 Iranian divers who were buried alive with their hands tied, news that shocked Iranians and served as a unifying event in remembrance of a painful era.

Gen. Seyyed Mohammad Bagherzadeh first told reporters on May 18 about the bodies of 175 Iranian combat divers who were buried alive. The news was shared widely on social media, with many sharing the last known pictures of the divers on the Iran-Iraq border. Later, as officials shared pictures of the corpses, Iranians online were once again moved by the tragic event, sharing those pictures online. Many Iranian designers created graphics dedicated to the divers. A blog called “175 shahid” (175 martyrs) was created to compile the graphics and other images Iranians shared online.

When the 175 Iranian divers were finally buried June 16 along with other veterans whose bodies were recently returned from Iraq, millions reportedly attended the funeral ceremony.

Pictures of the ceremony showed a mixed crowd of religiously and liberally dressed in attendance. Some held up pictures of their children who were killed during the war. Young and old men and women were pictured crying alongside the coffins.

Iran’s Basij organization and House of Cinema, which are on opposite ends of the political spectrum, both issued statements in honor of the divers and their sacrifices. Hard-line Raja News wrote, “The discovery of 175 Iranian divers with tied hands from Karbala 4 operations was so shocking that whoever is an Iranian, regardless of their inclinations, thoughts and views, is affected.”

The funeral made the front page and top story of Reformist newspapers such as Shargh Daily and Arman Daily and hard-line newspapers such as Vatan-e Emrooz. Shargh’s headline, the religiously charged “Return of Karbalaeis,” and Arman's “Martyr divers in a sea of tears,” left no doubt about the story's emotional impact. Vatan-e Emrooz, known for its provocative headlines, chose the funeral as its only front-page story two days in a row. Yesterday’s was simply one diver outlined in water in the shape of the Persian Gulf, with the headline, “You returned at a good time.” Today’s front story spanned the entire front page as well, containing a picture of the funeral with the headline, “Tehran’s Resolution.”

The funeral was also politicized. Former President Mahmoud Ahmadinejad attended, as did former Islamic Revolutionary Guard Corps leader Mohsen Rezai, who talked about the nuclear negotiations in his speech. Hard-liners in attendance for Rezai chanted, “No compromise, no submission, fight with America.”

Hard-liner cleric and temporary Tehran Friday prayer leader Ahmad Khatami described the turnout for the funeral as a sort of “military exercise.”

The invasion of Iran by the Iraqi army in 1980 was one of the most significant factors in unifying Iranians behind their young revolutionary government. In the last 36 years, political fortunes have risen and fallen, but the one constant within the discourse of the Islamic Republic is the sanctity of the “Sacred Defense,” a term often used for the Iran-Iraq War.