The end of 'Death to America'?

Iranian media outlets have largely supported the nuclear deal between Iran and the UN Security Council, with one writer suggesting it is such a turning point in relations with the West that the chant "Death to America" will soon end. 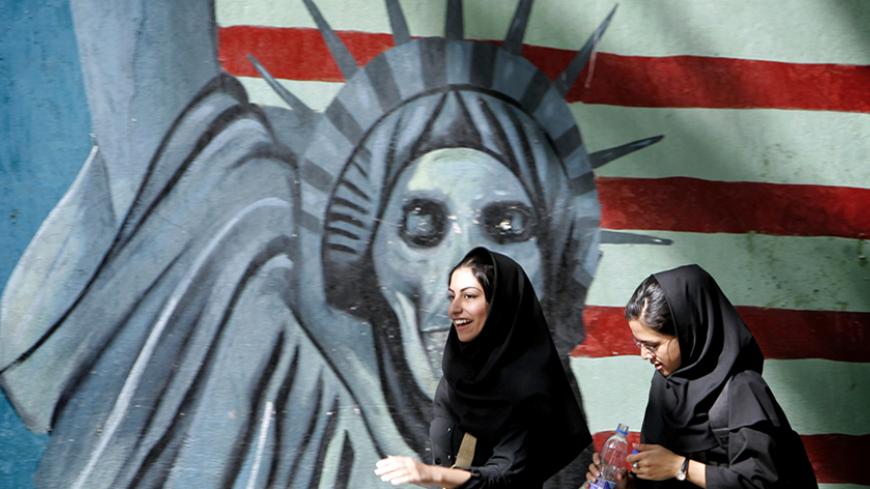 Iranian women walk past a satirical mural of the Statue of Liberty on the wall of former US Embassy in Tehran, April 16, 2006. - REUTERS/Morteza Nikoubazl
Arash Karami
@@thekarami
July 15, 2015

As Iranian online newspapers began publishing their reactions to the nuclear deal late on the afternoon of July 14, Iranians began pouring into the streets for spontaneous celebrations over a deal that many hope will bring economic improvement and end their international isolation. Most Reformist media outlets welcomed the deal and the promises they hope it brings along with it. Conservative and hard-line media organizations expressed skepticism, though their reaction was much tamer than could have been predicted, based in their previous ones.

Reformist Ghanoun newspaper’s top headline read, “The siege on Iran has broken.” Its entire front page was dedicated to coverage of and responses to the nuclear deal. Iranian analyst and Tehran University professor Sadegh Zibakalam wrote an article headlined, “The beginning of the end of Death to America.”

Zibakalam wrote that just as Nov. 4, 1979, was a turning point, when Iranian students took over the US Embassy in Tehran and took American hostages, sparking anti-Americanism and anti-Westernism, July 14, 2015, will be another “turning point in the history of Iran and the world that will be followed by reconciliation between Iran and the world.”

He added, “July 14, 2015, is the beginning of the end of ‘Death to America.’ This day will be recorded as the end of 'Death to the West.'” Zibakalam is no stranger to controversy and has even questioned Iran’s hostile position against Israel. The “Death to America” chant in Iran is often heard at state functions such as rallies or Tehran Friday prayers that are organized by hard-liners. In October 2013, with President Hassan Rouhani in power and promises of better relations with the world, an Asr-e Iran article suggested changing the “Death to America” chant to “Death to Arrogance,” given that the term “arrogance” is a religious one and does not specify a particular country. The author argued that “Death to America” was never originally a chant of the revolution and only came about as a result of geopolitical events after it. In fact, Iran's former Supreme Leader Ayatollah Ruhollah Khomeini had once asked Iran's media to suspend airing the "Death to America" chant, though this ban was never applied.

While Zibakalam’s article is a bit ambitious, others in Reformist newspapers were no less so. “Victory without war” read the top headline of Shargh, one of Iran’s leading papers, in reaction to the landmark deal. Shargh’s top story showed Iran’s Foreign Minister Mohammad Javad Zarif and US Secretary of State John Kerry shaking hands. The picture was captioned as the two diplomats most responsible for this deal saying goodbye before Zarif and his team left Vienna for the holy city of Mashhad.

Reformist Etemaad’s top headline was “The world changed: The 12-year duel of negotiations reached an agreement.” The newspaper's entire front page was dedicated to the nuclear talks. In Javad Deliri's article, headlined “A new era,” he wrote, “The end of the breathtaking negotiations, whatever result it brings in the future, from yesterday afternoon will be a different world.”

“The world stood in respect for Iran,” read the Reformist Arman Daily's top headline. Reza Raisi called the nuclear deal “the most important news of the century” and described the nuclear crisis as “the most complex problem” and one Iran was able to get out of with “dignity and strength.”

The two most hard-line newspapers, Kayhan and Vatan-e Emrooz, did not share any of the celebratory mood of the Reformist ones. Vatan-e Emrooz' top story was headlined “Awaiting Implementation,” a far cry from its sensational headlines that often go viral on social media for their shock factor. Kayhan’s top story, “Opposite narratives of one agreement,” read that the fact sheet released by Iran was a “win-loss in favor of Iran,” and that the fact sheet released by the West shows differences. The article, however, praised the hard work of the “faithful and brave” negotiation team.