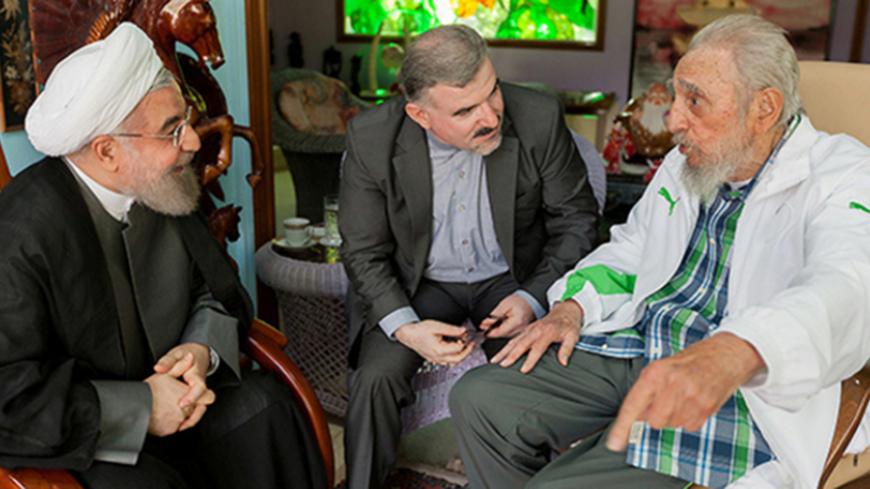 Iranian politicians reacted to the death of Fidel Castro, the longtime revolutionary leader of Cuba, by offering condolences and expressing their feelings about his demise. Meanwhile, an Iranian delegation is set to attend Castro's funeral Dec. 4.

Iran and Cuba, despite deep dissimilarities in ideology, have developed close ties since the 1979 Islamic Revolution in Iran. During the past four decades, most high-ranking Iranian politicians have traveled to Cuba and held meetings with Castro. On May 9, 2001, the former Cuban leader visited Iran and met with Supreme Leader Ayatollah Ali Khamenei.

On Nov. 26, President Hassan Rouhani, in a message to his Cuban counterpart Raul Castro, expressed its sympathy for the Cuban government and nation over Castro’s death, saying it caused Rouhani to feel “grief and sorrow.” Rouhani had met Castro during an official visit to Cuba on Sept. 19.

Rouhani hailed Castro as having been an example of “free men and warriors who do not give up fighting until the last days of their lives in order to keep the flag of justice- and freedom-seeking waving in the hearts of people.”

Meanwhile, Iranian Foreign Minister Mohammad Javad Zarif hailed Castro as “a prominent figure” in the fight against colonialism and “a symbol of independence-seeking struggles of the oppressed nations.”

On Nov. 28, Zarif attended a commemoration ceremony held at the Cuban Embassy in Tehran, saying, “Commandant Fidel Castro’s death is a great loss to all freedom-seeking movements, chiefly to such movements in Latin America.” He also stressed that Iranian-Cuban political and economic relations will continue.

Moreover, on Nov. 27, Iranian parliament Speaker Ali Larijani sent a letter to Juan Esteban Lazo Hernandez, the president of Cuba’s parliament, in which he called Castro “one of the prominent and unforgettable figures in the political history of the 20th century.”

Despite the controversial resignation of a senior official and arrests over a deadly train accident in Iran, Iranian media paid special attention to Castro’s death. On Nov. 27, most Persian-language newspapers covered his death with admiration and sympathy. The Reformist Shargh daily on its front page published a black-and-white photo of Castro along with the headline “Goodbye Commandant.”

Shargh’s profile of the Cuban leader began with, “There were 638 attempts made to kill ‘Commandant-in-Chief Fidel Castro,’ but on Friday night he passed away in Cuba after he celebrated his 90th birthday last summer.” The article continued, “Fidel Castro’s death undoubtedly is the end of an era in the history of Cuba, Latin America, and the world at large. … He was the icon of revolution and one of the most well-known and controversial leaders of the world.”

Castro’s death prompted mixed reactions among conservative Iranian dailies. Kayhan tucked the news in a corner of its Nov. 27 front page under a small, neutral headline, “Fidel Castro, The Leader of The Cuban Revolution [is] Dead.” Unlike Kayhan, the hard-line Vatan-e-Emrooz daily published an above-the-fold endorsement of the Cuban leader with the headline “Farewell Comrade: Fidel Castro, the Great Revolutionary of the 20th Century Passed Away at Age 90.”