Iran, Syria denounce US 'interference' in Cuba amid unrest

Iran is a close ally of Cuba, which is experiencing widespread protests against the communist government. 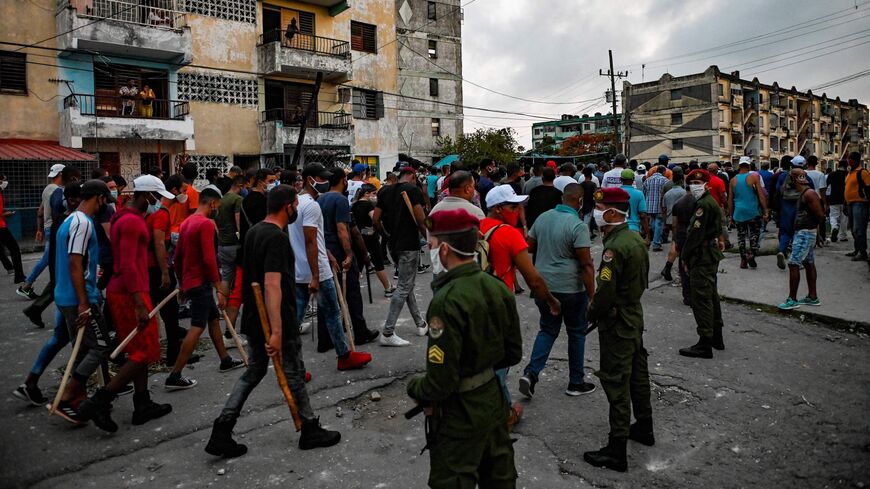 The Iranian and Syrian governments slammed US policy toward Cuba this week. Iran is a close ally of the Latin American island, which is experiencing rare anti-government protests.

An Iranian Foreign Ministry spokesperson said on Tuesday that the Islamic Republic stands in “solidarity” with Cuba in the face of US sanctions.

“As a country facing illegal and cruel sanctions of the US, Iran expresses its solidarity with the Cuban people and government and calls for an immediate end to the US’ unilateral sanctions against Cuba,” said Saeed Khatibzadeh, as reported by the semi-official Tasnim News Agency.

A Syrian Foreign Ministry official slammed US “interference” in Cuba on Wednesday and said US sanctions are the main reason for the poor economic situation in the country, according to Syria’s official SANA news agency.

“The Syrian Arab Republic condemns in the strongest terms the US blatant interference in Cuba’s internal affairs which aims to destabilize it and to undermine the achievements gained by the Cuban people,” the official said. “The US unjust blockade and the policy of the illegitimate unilateral coercive measures are the main reason behind the difficult economic conditions and the suffering in the livelihood of the Cuban citizens.”

Widespread protests began in Cuba on Sunday over food and medicine shortages, rising prices and the government's handling of the COVID-19 pandemic. There have been acts of vandalism and looting against state-owned institutions. The government has blamed US sanctions for the country’s poor economic situation, according to the BBC.

Iran and Cuba enjoy close relations. Cuban scientists helped their Iranian counterparts develop the COVIran Barekat vaccine against the coronavirus that is currently being administered in the Islamic Republic. Syria is another ally of Iran, and follows Tehran’s lead on some international issues. Shared historical animosity with the United States is one reason for strong Iran-Cuba relations. Like Cuba, Iran is subject to harsh US sanctions.

The United States is not directly involved in the Cuba protests, though US officials have praised the protesters.

“We commend the people of Cuba for showing great bravery, the strength of their will and the power of their voice,” State Department spokesperson Ned Price told reporters on Tuesday. “We call for calm and we condemn any violence against those protesting peacefully, and we equally call on the Cuban government to release anyone detained for peaceful protest.”

US President Joe Biden expressed a similar view in a Monday statement.

“We stand with the Cuban people and their clarion call for freedom and relief from the tragic grip of the pandemic and from the decades of repression and economic suffering to which they have been subjected by Cuba’s authoritarian regime,” he said.

The United States has a history of interventionism in Cuba, and Iranian and Syrian state media are framing the issue as one of US interference. In 1898, the US military successfully intervened on behalf of Cuban independence fighters against Spanish colonial forces. The United States exerted considerable influence over Cuban affairs in the 20th century until the communist revolution led by Fidel Castro overthrew the US-backed government in 1959. Cuba has a remained a communist state since then.

The southeastern US city of Miami has a large Cuban population, many of whom fled Castro’s ascension to power. Suarez himself is of Cuban descent.

Iranian state media coverage of the unrest in Cuba has been sympathetic to the Cuban government. On Monday, Press TV linked the protests to US economic pressure and on Tuesday, the outlet ran a piece on Latin American leaders expressing support for Cuba.