Iran sees failure of US sanctions in Cuba decision

Iranian officials are pointing to the rapprochement between the United States and Cuba as an admission that the US policy of sanctions was ineffective. 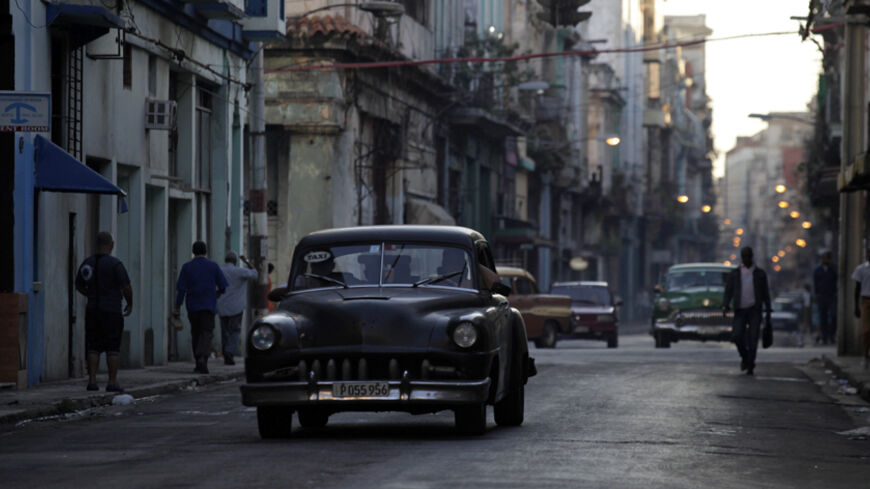 After 18 months of secret negotiations, US President Barack Obama ordered the restoration of full diplomatic ties between the United States and Cuba on Dec. 17, ending half-century-old US policy. Iranian officials and media outlets are painting the change in US policy as an acknowledgement that the US sanctions have not been effective in changing Cuba’s positions. Though there are major differences between US-Iran and US-Cuba relations, both Iran and Cuba, after experiencing revolutions, expelled all American influence from their country while changing the balance of power in their regions and facing severe US pressure and sanctions.

Foreign Ministry spokeswoman Marzieh Afkham said, “The resistance of the Cuban people and officials on their principles and the ideals of the revolution during the last 50 years showed that a policy of isolation and sanctions from domineering powers against the will and endurance of independent governments and people is ineffective and inefficient.”

During his Dec. 19 sermon, temporary Tehran Friday prayer leader Ayatollah Movahedi Kermani loosely quoted US Secretary of State John Kerry’s announcement: “For five and a half decades since, our policy toward Cuba has remained virtually frozen, and done little to promote a prosperous, democratic and stable Cuba. Not only has this policy failed to advance America’s goals, it has actually isolated the United States instead of isolating Cuba.” Kermani called the US statement a “confession” that its policies of isolation have failed.

In reference to Obama’s comments that the Cuban government continues to oppress its people, Fars News reported that despite the change in relationship, “Hostile statements from American officials have not ended, just as the Geneva agreement did not end hostile statements against Iran.”

The article read that there are four points to take away from this change in the US-Cuba relationship:

A number of other Friday prayer leaders also addressed the change in US-Cuba relations.

The Qom Friday prayer leader said that the United States “made it perfectly clear that the sanctions are ineffective and has opened the path for relations.” He added, quoting late Supreme Leader Ayatollah Ruhollah Khomeini, “This is one example of a statement by the founder of the Islamic Republic [ringing true], that ‘America cannot do a damn thing.'”

Kashan's Friday prayer leader said, “For the first time, Obama admitted a mistake and said that the 50 years of sanctions against Cuba were a mistake.” He went on, “Fidel Castro, the leader of Cuba, single handedly stood up against the tyranny and oppression of America in Latin America and today, the leaders of America have understood that sanctioning these people is a mistake.” He added, “Obama should not repeat this mistake with Iran.”