The enigma of Qasem Soleimani and his role in Iraq

Al-Quds Force Commander Qasem Soleimani, profiled in last month's New Yorker, has been among the most influential, and controversial, figures in Iran-Iraq relations. 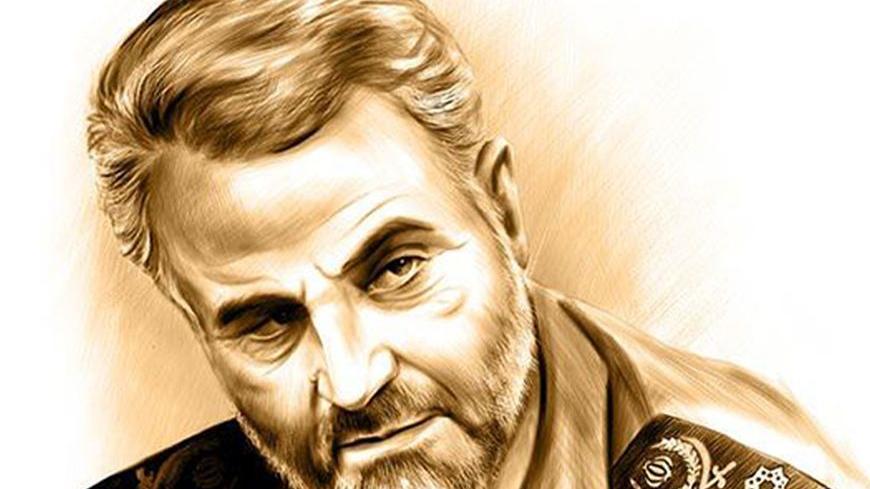 An undated artist's sketch of Qasem Soleimani from a Facebook fan page. - Facebook.com

Qasem Soleimani's name can been found in several files in the Middle East, from Afghanistan to Palestine, going back more than 10 years. There is, however, very little detailed information on the life of this man or the nature of the enigmatic roles he plays in managing these files. Dexter Filkins' “The Shadow Commander,” published in the Sept. 30 issue of The New Yorker, is the latest and most in-depth piece on Soleimani, particularly in regard to his prominent roles in Iraq and Syria.

Soleimani was recently referenced by The Wall Street Journal, along with Turkish Intelligence Minister Hakan Fidan and Saudi Arabia's Prince Bandar, as three spy chiefs shaping the region. Even more can be said about Soleimani's role in Iraq, which included support for militias which opposed and fought US forces there.

Soleimani, currently commander of the Quds Force, a special unit of the Iranian Revolutionary Guard Corps (IRGC), began his military career at the start of the Islamic revolution in Iran. His first fighting experience is thought to have been in helping crush the splinter revolution waged by armed Kurdish groups in Mahabad, in western Iran. While he did not have a prominent leadership role in these operations, they provided him valuable experience in irregular warfare and prepared him to climb the leadership ladder of the IRGC.

After helping pacify Iranian Kurdistan, Soleimani moved on to the war with Iraq immediately after it erupted in 1980, serving as the leader of a military company, consisting of men from his hometown of Kerman whom he personally assembled and trained. He quickly rose through the ranks because of his role in the successful operations to take back land the Iraqi army had occupied in Khuzestan province. He eventually became the leader of the 41st Tharallah Division.

Soleimani took part in most of the military operations during the eight years of the Iran-Iraq war. He also had a hand in leading and organizing various irregular warfare missions deep inside Iraq carried out by the Ramadan Headquarters. It was at this point that Soleimani established relations with Kurdish Iraqi leaders opposed to Iraqi President Saddam Hussein, and with the Badr Organization [first called the Badr Brigade and later the Badr Corps] composed of Iraqis fighting alongside the Iranians against Saddam’s regime. Soleimani played a part in planning and administering the military operations of the Badr forces in the Shiite uprising against Saddam at the start of the Persian Gulf War in 1991.

After the Shiite uprising was crushed in the early 1990s, the 41st Division, led by Soleimani, was sent to eastern Iran to suppress drug-smuggling gangs that had gained control of swaths of desert in Kerman, Sistan-Baluchestan and Khorasan provinces. Soleimani never completed university or military studies, but leading forces in irregular warfare and fighting in the desert provided enough experience and expertise for him to assume the leadership of the Quds Force, which specializes in military operations outside Iran.

Soleimani was able to develop and expand the Quds Force's area of activity and its responsibilities. Its tentacles extended to the far reaches of the world in addition to Iran’s neighbors, including Afghanistan, Iraq and Tajikistan, and involved diplomatic as well as military affairs. Because of this, and contrary to customary diplomatic relations, Soleimani became the exclusive contact for negotiations with the United States on cooperation on Iraq and Afghanistan. This perhaps explains why Iranian ambassadors to Iraq have always been chosen based on military and security backgrounds. Both former Ambassador Hassan Kadhimi Qomi and current Ambassador Hassan Daanaeifar hailed from the Revolutionary Guards and have extensive backgrounds in Iran's security apparatus.

Over the years, Soleimani has managed to develop a broad network of relationships with Iraqi political figures and parties of every leaning. This dates back to his getting to know Kurdish and Badr group leaders during the Iran-Iraq war. Abu Mahdi al-Mohandis, a prominent member of the Quds Force and Iranian Ministry of Intelligence, and Hadi al-Amri, the current Iraqi transport minister, former Badr chief of staff and later its leader, both played a significant role in expanding Soleiman's network to include Shiite groups unaffiliated with Iran in the past. Soleiman has also publicly acknowledged relationships with Sunni entities and personalities, the most prominent being Osama al-Nujaifi, the speaker of the Iraqi parliament, who attended a gathering to offer condolences on the passing of Soleimani’s mother in Tehran.

As indicated, the Quds Force leader's activities in Iraq have encompassed military and political affairs. He also provided both Sunni and Shiite militias the support they needed to fight US military forces in Iraq after the 2003 invasion. On the political front, it was rare for a Sunni or Shiite entity to participate in the Iraqi government without a direct or indirect understanding or relationship with Soleimani. His relationships and coordinating operations also involved active social factions, from the religious to the media to civil society organizations representing Iraq’s different ethnicities and confessions.

After grasping the nature of Soleiman's role in Iraq, one might ask how this came to be. In this regard, one should keep in mind a number of points. First, the United States invaded Iraq without having established a network of relationships with the various elements of the Iraqi opposition to help it manage files in the post-combat period. In contrast, Iran has worked for three decades to develop wide-ranging relationships, including with organizations that it had hosted as well as Kurdish, Shiite and Sunni entities outside Iran. Soleimani was able to draw on and strengthen this network, linking it to Tehran through a framework of shared interests among all sides. The United States, meanwhile, relied solely on its military clout, having not taken any discernible action to create a network of similar interests in Iraq before invading.

Second, there is a powerful ideological relationship between Islamist parties, Shiite and Sunni, in Iraq and the regime of the Islamic Republic of Iran. This has compelled both sides to view what they are doing regarding the other as a religious duty before being a national duty. Accordingly, a large number of these relationships must be understood and explained within the broader context of the logic behind collaboration.

This ideological relationship dates back to the period following the victory of the Islamic Revolution in Iran, when the political philosophy of Iraqi Shiite cleric Mohammed Bakr al-Sadr, the founder and spiritual father of the Islamic Dawa Party, was adopted in drafting the new Iranian Constitution, and he called on his followers to sustain what he referred to as “the great achievement.” Added to this is the contribution of the Sunni Islamic Brotherhood's ideology in theorizing the form an Islamic regime might take.

Third, the long period of repressive Baathist rule in Iraq led to the collapse of all state institutions along with Saddam. This left Iraq a splintered and stratified society after the fall of the regime in 2003. As a result, the different segments of the society sought refuge from each other and the actions of various gangs and extremist groups, while national interests differed from regional and international interests. While most of Iraq’s neighbors and active regional powers closed their doors to Iraq during the chaos of the occupation and insurgency, Iran opened its doors. Soleimani was the manager behind this operation and its many facets.

Iran contributed to bolstering the collapsed economy by pushing religious tourism from both sides between Iraq and Iran. Iranian visitors entered Iraq, and Iraqis went to Iran without passports or other official documents until the situation stabilized and religious tourism picked up enough to warrant official frameworks. Iran also supported emerging religious parties by financing and promoting them. In a similar vein, as noted, it offered its support to militias fighting the Americans in different regions of the country. At the same time, it offered assistance to the United States in resolving the Iraqi situation and improving the security situation for the sake of the government formed under Iran's protection.

Finally, it seems the role played by Soleimani extends beyond the man and his job. It involves far-reaching institutional relationships connecting Iraqi society and government to Iran. The Iraqi assault has damaged the relationship between the two countries and Iran has remained wary of a repeat performance. Accordingly, Iran endeavored to create conditions to prevent any danger that might threaten it from the Iraqi side. In such circumstances, the Iraqi sides must not attack Iran, nor try to be agents for Iran. Instead, Iraq should try to strike a balance in the relationship that serves the interests of both countries and prevents Iranian interference, guaranteeing reasonable political interactions.