US experts warn about the “Hezbollization” of Iraq and Syria but there is little alternative now to Iranian-backed Shiite militias to push back the group that calls itself the Islamic State. 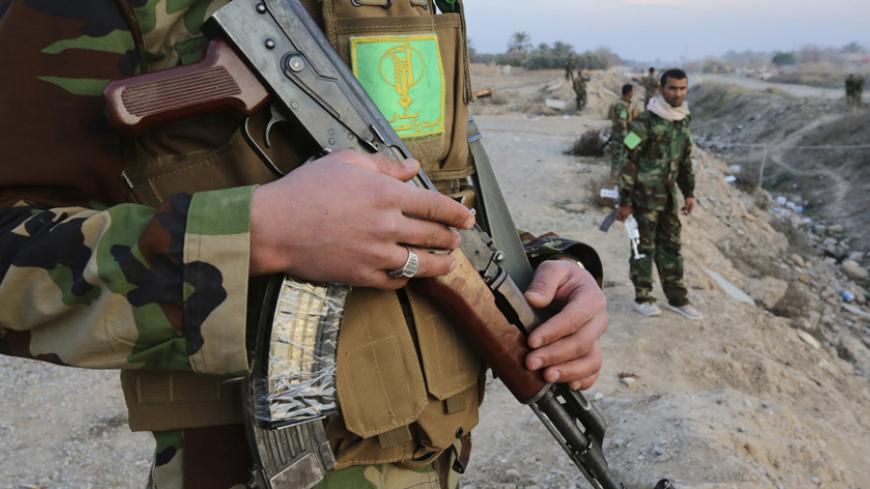 A Shiite fighter holds his weapon while guarding on the outskirts of Diyala province, north of Baghdad, Feb. 2, 2015. -

WASHINGTON — A plethora of new and old Shiite militias is dominating battlefields in Iraq and Syria, US experts say, raising concerns about growing Iranian influence that could exacerbate sectarian divisions and ultimately weaken the fight against the group that calls itself the Islamic State (IS).

The growth of these groups — known as popular mobilization units — poses a conundrum for the Obama administration and the coalition of about 60 countries it is leading against IS. For the time being, Iran-backed groups are providing most of the “boots on the ground” that are pushing back IS forces from key areas near Baghdad, including Diyala province. These militias are also preventing IS from overrunning even more territory in Syria. But there are disturbing reports of massacres of Sunni civilian populations by Shiite fighters, some of whom have killed Americans in the past.

At his confirmation hearing Feb. 4, Ashton Carter, the nominee to replace Chuck Hagel as defense secretary, went so far as to equate Iran and IS as the biggest threats to US national security, in part because of spreading Iranian influence in Iraq. "I have concerns about the sectarian nature of Iran’s activities in Iraq,” Carter explained to the Senate Armed Services Committee.

"The United States must continue to make clear to the Iraqi government that Iran’s approach in Iraq undermines the needed political inclusion for all Iraqi communities, which is required to ultimately defeat [IS]," he said.

US room for maneuvering may be limited, however.

Iran-backed militias have played a pivotal role in Iraq since the US invasion overthrew the Sunni regime of Saddam Hussein in 2003. His removal facilitated the return of thousands of Iran-trained Shiite fighters. They included members of the Badr Brigades, which was created in Iran during the 1980-88 Iran-Iraq War as the military arm of the Supreme Council for the Islamic Revolution in Iraq, one of post-Saddam Iraq’s main political parties. The leader of what is now called the Badr Organization, Hadi al-Ameri, is Iraq’s minister of transportation and has been spotted among militiamen in recent battles as has the head of Iran’s Quds Force, Qasem Soleimani.

“How can we control Iran’s influence in Iraq considering that the parties in control of the Baghdad government are Shiite parties?” Alireza Nader, a Middle East analyst at Rand, told Al-Monitor. “The Iraqi government is so vulnerable at this point that it has little choice but to turn to Iran which, unlike the US, has people on the frontlines [in Iraq] taking casualties.”

In the aftermath of Saddam’s overthrow, Iran made overtures to the United States for a broad-based dialogue but was spurned. Iran began organizing new militias, known as “special groups,” such as Asaib Ahl al-Haq, the League of the Righteous, which attacked US forces. When the United States ended its combat mission in Iraq in 2009, militia leaders who had been jailed or blacklisted were freed and rehabilitated and some are now prominent in the fight against IS.

Among them is Abu Mahdi al-Mohandes, leader of the group Kataib Hezbollah, which is on the US State Department’s terrorism list.

Even US experts on Iraq who are critical of Iran’s role concede that the militias are providing an essential service while efforts continue to reconstitute the Iraqi army and to organize national guard forces that can fight more effectively in Sunni areas, such as Mosul. The Iraqi Cabinet has agreed to the creation of a national guard but the parliament — dominated by Shiites and ethnic Kurds — has yet to approve.

As US forces pound IS from the air, however, concerns are increasingly being expressed in Washington, as well as among Sunni Arab members of the anti-IS coalition, that Iran will be the ultimate beneficiary. For some critics, these concerns are compounded by the prospect of a nuclear deal between the United States and Iran.

“What if we defeat [IS] but lose Iraq in the process?” asked Michael Knights, a leading US expert on the Iraqi military. Referring to what he called “a Hezbollization of the Iraqi security sector,” Knights told an audience at the Washington Institute for Near East Policy on Feb. 6 that this was a “Yalta moment” similar to the 1945 conference in Crimea where the United States acquiesced to Soviet control of post-war Eastern Europe.

The United States needs to step up its security cooperation with the Baghdad government and “outperform the Iranians” to prevent Iraq from becoming an Iranian satellite, Knights suggested. That will require “a visionary decade-spanning relationship” with the Iraqi government, he said, that will include a larger US military presence.

Phillip Smyth, an expert on Shiite militias, sketched an even bleaker and more complicated picture of the situation in Syria, where scores of new groups have emerged in the past year and a half to fight on the side of the Iran-backed government of President Bashar al-Assad.

While attention has focused on the high number of foreign fighters flocking to Syria to join IS and other Sunni jihadist groups, “one of the largest foreign fighters’ contingent is Shia,” Smyth said. Most of the fighters are members of Lebanon’s Hezbollah or of Iraqi militias but he said there are also recruits coming from as far as India, Afghanistan and Africa — many of them answering ads on social media. Smyth said these foreign Shiite fighters numbered in the “tens of thousands” and that more than a thousand may have already died in the war.

US officials contacted by Al-Monitor said they had no figures for Shiite foreign fighters in Syria. Foreigners estimated to have joined the Sunni side are about 20,000, larger than the number that joined the anti-Soviet jihad in Afghanistan in the 1980s.

Many of the Shiite groups in Syria associate themselves with the defense of the Damascus shrine of Sayyida Zeinab, a granddaughter of the Prophet Muhammad and sister of Hussein, whose martyrdom in the seventh century was a defining event in the schism between the Sunni and Shiite branches of Islam. However, Smyth said the defense of the shrine was a cover for more extensive activities in Syria.

“They have secured the rule of Bashar al-Assad and constructed a new Golan front” on the border between Syria and Israel, Smyth said. Last month, Israel bombed and killed a contingent of Hezbollah fighters in Syria that included an Iranian general and Hezbollah retaliated with a missile strike that killed two Israeli soldiers in a disputed area on the border of Israel, Syria and Lebanon.

Some analysts say that fears of a new “Shiite crescent” running from Tehran through Baghdad and Damascus to Beirut (with a side trip to Sanaa in Yemen where Iran-backed Houthi rebels have recently seized control) are exaggerated.

Iran has significant internal economic problems, and popular support for what is viewed as “Arab” causes is minimal, while many of the foreign Shiite groups have their own agendas and grievances, which they would pursue even without Iranian help.

Still there is no doubt that IS and other Sunni jihadist groups — which reject Shiites as apostates — have stirred up pan-Shiite feeling in countries with substantial Shiite populations, just as the US replacement of Saddam by a Shiite-dominated government in Baghdad fueled the rise of IS’ precursor, al-Qaeda in Iraq.

“It’s not new and we’ve seen it in Lebanon and Syria before,” said P.J. Dermer, a former US Army colonel with long service in Iraq and elsewhere in the Middle East. Given Iran’s proximity to the battlefields and long ties with Arab Shiite populations, “we’re going to have a tough time” trying to reduce its influence, Dermer said.