Who has 'boots on the ground' in fight against IS?

A mismatch in priorities between the United States and its Sunni allies is obliging the Obama administration to rely more on Iran-backed forces to fight the group that calls itself the Islamic State. 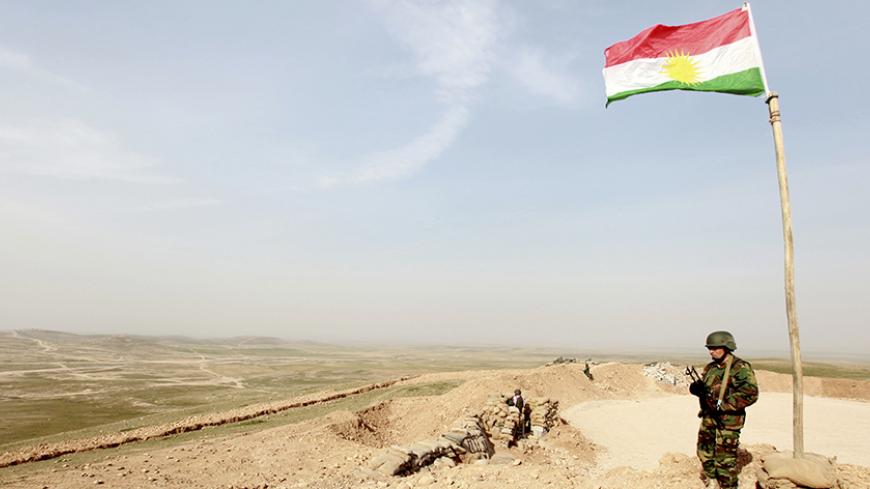 A Kurdish peshmerga fighter takes up position with his weapon as he keeps watch, on the outskirts of Mosul, Jan. 26, 2015. - REUTERS/Azad Lashkari

WASHINGTON — As the United States and Iran continue efforts to reach a long-term nuclear agreement, it is becoming increasingly evident that they are tacitly aligned in a longer-term struggle against the mutual threat of Sunni extremism.

US Defense Secretary Ashton Carter indirectly confirmed July 7 that the “boots on the ground” battling the group that calls itself the Islamic State (IS) are primarily forces also backed by Iran, including Shiites and Kurds.

The United States has managed to train only 60 vetted individuals to fight IS in Syria, Carter told the Senate Armed Services Committee. The figures for Iraq are better but hardly impressive. As of June 30, Carter said, the United States has trained fewer than 11,000 Iraqis — of whom only 1,300 are Sunnis — to join forces seeking to roll back IS advances in Iraq.

In an editorial July 8, The Washington Post blamed the Obama administration for waiting so long to try to build up a moderate Sunni alternative in Syria and refusing to promise protection for Sunni fighters against the Syrian regime’s barrel bombs — or against Shiite militias in Iraq.

Sen. Lindsey Graham, R-S.C., speaking at the Atlantic Council, suggested that the United States needs to send nearly 7,000 additional US forces to Iraq — to augment 3,500 currently there — in part to embed with Iraqi units and counter Iranian influence. Graham said he would also send an unspecified number of Americans to Syria to lead a Turkish-Saudi-Egyptian force against IS. The current US strategy of minimal ground involvement "doesn't have a snowball's chance in hell of working," Graham said.

So far, the most effective fighters against IS have been Iraqi Shiite militias and Iraqi and Syrian Kurds. Advances by the latter — seizing a key border crossing used by foreign fighters transiting Turkey to join IS — have upset nominal US allies such as Turkey, which fears creation of another autonomous Kurdish entity on its borders in addition to the one that already exists in Iraq.

Turkish President Recep Tayyip Erdogan has been threatening to send Turkish troops into Syria, not to fight IS but to stop the Kurds and create a buffer zone for refugees. But the Turkish military has not been supportive and given the electoral rebuff received by Erdogan’s Justice and Development Party last month, it is not likely that his plan will proceed.

Iran, despite concerns about its own sometimes restive Kurdish minority, has been strongly backing Iraqi and Syrian Kurds against IS, which regards Shiites and most Kurds as mortal enemies. Iranian military and intelligence advisers have been active in Kurdish areas in both Iraq and Syria, according to informed sources, even as US bombers and drones hit IS bases and personnel from the air.

The Obama administration insists that there is no direct military coordination between the United States and Iran. But surely messages are being passed to avoid hitting the wrong targets.

At an event July 7 at the Atlantic Council, Barry Posen, director of the security studies program at the Massachusetts Institute of Technology, said in response to a question from Al-Monitor, “We need to find our allies where we find them. There are countries that may be our adversaries on one issue that on the [IS] problem end up being tacit allies. Sometimes we’ll have to stand up publicly and claim this is not the case.”

Iranian officials have suggested they would be willing to work openly with the United States to counter IS. In a video message from Vienna on July 3 devoted primarily to the nuclear negotiations, Iranian Foreign Minister Mohammad Javad Zarif said that a nuclear deal would “open new horizons to address important common challenges. … The menace we are facing … is embodied by the hooded men who are ravaging the cradle of civilization.”

US efforts to fight IS while also concluding a nuclear agreement with Iran are adding new layers of complexity to American efforts to reassure Sunni Arab allies such as Saudi Arabia that the Obama administration is not downgrading relations with them and “pivoting toward Persia.”

At the Atlantic Council event, council senior fellow Bilal Saab outlined a new report that calls for shoring up the Arab states of the Persian Gulf by “cooperating more closely on intelligence and threat assessments” and helping “build their capacities to train and equip their law enforcement agencies and directorates of analysis so they can better assess, detect, and counter Iranian interference.” If necessary, Saab would even negotiate formal US defense treaties with these countries to increase their self-confidence and allow them to participate in region-wide security discussions that would include Iran.

This is not “an effort to gang up on Iran or make it feel even less secure,” Saab said.

In his report, he wrote that “overcoming the Middle East’s massive security deficit will require, among other things, a marked de-escalation in the increasingly tumultuous relationship between Saudi Arabia and Iran.”

So far, however, Saudi Arabia seems to be putting more energy into battling another Iranian-backed group — the Houthis of Yemen — than into the campaign to roll back IS. Several speakers at the Atlantic Council event warned that Saudi Arabia was risking its own security by overreacting to the Houthi advance in Yemen and seeking to bomb that country into submission.

Richard Haass, president of the Council on Foreign Relations, said that “the potential for blowback in the kingdom is significant.” He warned that IS would seek to seize control of the holiest sites of Islam, which are located in Saudi Arabia.

“If you call yourself a caliphate, you cannot accept a country that controls Mecca and Medina,” Haass said. “It’s a question of when, not if” IS attacks.

Saab said that the Saudis were well aware of the internal threat posed by IS but face other challenges.

In his report, he wrote that “until the Arab world charts a path forward and starts addressing its rampant political decay, religious hubris, and economic mismanagement, regional security will remain scarce, and challenges such as [IS], Iran’s destabilizing behavior in the region and the growth of violent extremism — to just name a few — will continue to present themselves and possibly worsen with time.”