US 'working through' extent of support for Syrian rebels

The resolution being considered by Congress does not address protection of vetted Syrian rebels against Syrian government forces; nuclear talks with Iran enter decisive phase amid challenges by Republicans in Congress; Ayatollah Ali al-Sistani determines fate of reconciliation in Iraq; Israeli election is verdict on Benjamin Netanyahu. 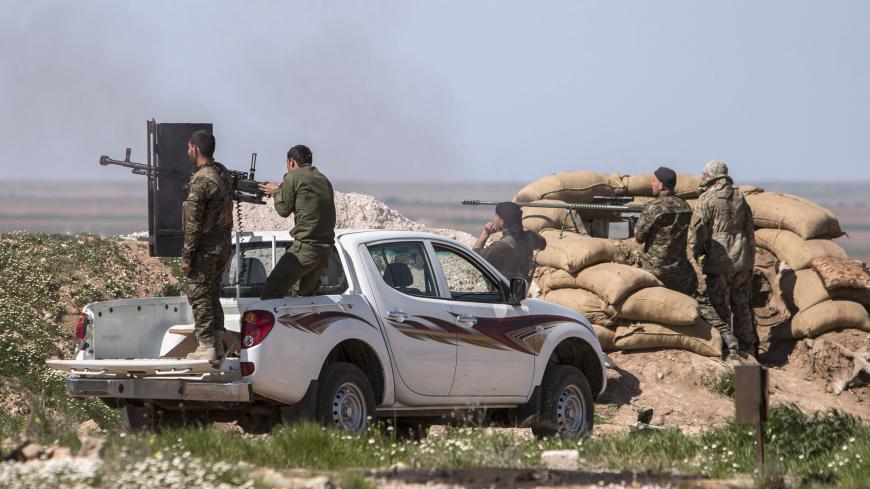 Kurdish People's Protection Units (YPG) fighters and foreign fighters (R) who joined the YPG in Syria man their weapons during what the YPG said was an offensive against them by Islamic State fighters, in the western countryside of Ras al-Ain, March 10, 2015. - REUTERS/Rodi Said

Obama administration officials said this week that the United States is considering how best to support Syrian rebel forces trained and equipped by the United States, including if these groups are drawn into conflict with Syrian government forces, although the authorization to use military force being considered by Congress does not appear to provide the legal authority to provide such protection.

US Secretary of Defense Ashton Carter told reporters March 11, “The forces that we train in Syria, we will have some obligation to support them after they’re trained. … We all understand that. And we’re working through what kinds of support and under what conditions we would do so, to include the possibility that, even though they’re trained and equipped to combat ISIL [the Islamic State (IS)], they could come into contact with forces of the Assad regime.”

US Secretary of State John Kerry, testifying the same day before the Senate Foreign Relations Committee, said that the authorization to use force being considered by Congress is “ISIL specific. There are those who wish it would include Assad, but it doesn’t.”

Al-Monitor’s Barbara Slavin was the first to report on comments made March 2 by John Allen, the US special presidential envoy for the Global Coalition to Counter ISIL, that a no-fly zone was “under consideration” and that the United States would protect Syrian opposition forces it trains and equips.

Meanwhile, the Turkish government expects that Syrian rebels trained in Turkey will also be taking on Assad’s forces. As the Barack Obama administration considers the extent of protection for an underequipped rebel force, the scenario is already being drawn for what the United States would do when — not if — rebel groups get hammered by Syrian government forces. Syrian President Bashar al-Assad considers the "moderate" opposition forces as legitimate military targets. The statements by US officials this month are already ahead of both the requisite legal authority and a clear statement of the endgame in Syria, beyond defeat of IS.

The United States could end up backing the "vetted" rebel groups against both IS and Syrian government forces. Although 62% of Americans support the Obama administration’s proposal to use military force against IS, and 65% would consider sending ground forces, according to a McClatchy-Marist poll this month, it is not clear Americans are ready to back a US military commitment to battling both the Syrian government and IS, a possibility that is beyond the scope of what the Obama administration has asked Congress to consider.

There are members of Congress pressing for the United States to become more deeply engaged militarily in Syria to counter Iran’s support for Assad. Sen. Lindsey Graham of South Carolina, who is a possible Republican presidential candidate, said he will withhold his support for the authorization unless it allows protection for Syrian rebels battling Syrian government forces.

Steinmeier: Iran talks “a little more difficult” because of letter

Kerry arrives in Lausanne, Switzerland, on March 15, for the latest round of talks between Iran and the P5+1 countries on an agreement to limit Iran’s nuclear program.

The negotiators face an end of March deadline to announce a "political framework" for an eventual deal, and June 30 to conclude a final agreement.

The New York Times reports, “The White House hopes that an accord might eventually open a new chapter in a relationship that has been marked largely by decades of mutual suspicion, Iranian-sponsored terrorism, American cyberattacks and Iranian retaliation.”

This column wrote in November 2014 that the conclusion of a nuclear agreement could facilitate a political settlement on Syria and progress in other regional trouble spots, including the battle against IS, al-Qaeda and other terrorist groups.

The Obama administration is being challenged by Republicans skeptical of Iran’s nuclear intentions and regional ambitions. Sen. Marco Rubio of Florida, another possible Republican presidential candidate, accused the Obama administration of seeking “not to upset Iran” in the US strategy toward IS, earning a rebuke from Kerry, who said Rubio is ”misreading” the situation in the region and that there is a “mutual interest” among all parties in defeating IS, as reported by Julian Pecquet.

The depth of partisan rancor over a possible Iran deal was on display in the letter to Iran’s leaders written by Sen. Tom Cotton, R-Ark., and signed by 46 other Republican senators.

In response to a question from Al-Monitor’s Slavin at an event in Washington, German Foreign Minister Frank-Walter Steinmeier said that the letter made the negotiations “a little more difficult now.”

The “advantage we [the West] had [in the negotiations] was to be found in the fact that we said we were credible. ... All of a sudden, Iran is in a position to turn to us and ask 'Are you credible?' ... We’re not talking about minor details of minor importance,” Steinmeier said.

Seyed Hossein Mousavian adds that “the principal error committed by the Republican letter is that it conveniently ignores the primary way by which a nuclear deal with Iran will be enacted — through a UN Security Council resolution. For as much as members of Congress have expressed dire concern for how countries such as Saudi Arabia and Israel would fare after a nuclear deal, they hardly ever mention that the United States is negotiating with Iran alongside its longtime allies France, the United Kingdom and Germany, as well as Russia and China. If a deal is reached, the Security Council would pass a resolution enacting its terms, which Congress has no authority over rescinding.”

Following a visit to Iraq, Gen. Martin Dempsey, chairman of the US Joint Chiefs of Staff, expressed concern about the deepening of sectarian tensions in Iraq after IS is defeated. The United States is pushing the Iraqi government to urgently undertake policies aimed at reconciliation between the Iraqi government and the country’s disenfranchised Sunni communities. There have been reports that Shiite and Kurdish militias may have committed abuses and displaced Sunni Arab residents in those towns where IS has been pushed out. This week, Iraqi government forces teamed with Iranian-backed Shiite militias and some Sunni forces to attempt to retake Tikrit. A small village near Tikrit is the birthplace of former Iraqi President Saddam Hussein.

Mustafa al-Kadhimi writes this week that Grand Ayatollah Ali al-Sistani, Iraq’s leading Shiite religious authority, will again be a decisive force for reconciliation among Iraq’s communities. It was Sistani who issued a fatwa in June 2014 calling for a "righteous jihad" against IS. Last month, Sistani issued a recommendation for the “popular mobilization forces” to show restraint and respect human rights in the conduct of the war.

Kadhimi writes, “The "righteous jihad" concept that Sistani created is not open-ended. It is a means to an end, and linked to deflecting the IS danger. Once this threat is gone, the fatwa becomes invalid. At that point, the Iraqi state will have to deal with the period after the validity of Sistani’s fatwa, which it anticipates doing through the National Guard law, which is supposed to encompass volunteer fighters, as part of clear mechanisms for the next stages.

“One issue” in Israeli election

Ben Caspit writes this week that the March 17 Israeli elections are, “more than anything else, a referendum on the one and only issue: Prime Minister Benjamin Netanyahu. Yes or no, that is the question.”

Caspit continues, “The rest of the players in the Israeli political arena are also to be found in places they didn’t anticipate only a few months ago. Zionist Camp leader Isaac (Buji) Herzog, who could hardly garner 12 to 13 seats at the beginning (at the time, Netanyahu enjoyed at least 25 seats), now leads the polls. Overnight, Herzog became the alternative candidate and the prime minister’s only rival, a default to Netanyahu.

"The process that led to this political miracle was Herzog’s joining up with Tzipi Livni, head of the Hatnua Party. On a personal level, Livni became one of the most disliked politicians in Israel, mainly to the right. But the Herzog-Livni partnership jump-started the Zionist Camp campaign and gave it its first advance, its first leap forward that transformed the Zionist Camp into the only political alternative. Lapid, who did not invest enough energy in his persuasion efforts vis-a-vis Livni, can only regret it now. If Livni would have joined up with him, it is altogether likely that he (and she) would now be leading the polls, and not Herzog.”

Akiva Eldar reports that “Herzog, as well as Yesh Atid leader Yair Lapid, Kulanu leader Moshe Kahlon and even Foreign Minister Avigdor Liberman have been talking a lot in recent months about a regional arrangement that would include moderate Arab states in resolving the conflict. They have on their desks a study by the HaGal Hadash Institute pointing to significant public support for such an agreement. The extensive study, conducted for the Israel Peace Initiative organization, shows that 72% of respondents (Jews only) support a regional arrangement for ending the conflict that would lead to separation from the Palestinians and a two-state arrangement. Of those polled, 64% believe that a continued diplomatic freeze harms the security of the state and 60% are certain that a regional defense arrangement with Arab states on fighting terrorism and Iran would make Israel much safer.”

What is an Islamic feminist?

Can Islamist women be feminists? Al-Monitor’s series on Women in the Middle East examined the issue this week in a piece by Madawi Al-Rasheed. The series, which continues through the end of the month, shines a light on the ways that women in the region have found the means to assert their own identity.