The two countries slammed the US and Sunni states for trying to cut out Syrian President Bashar al-Assad. 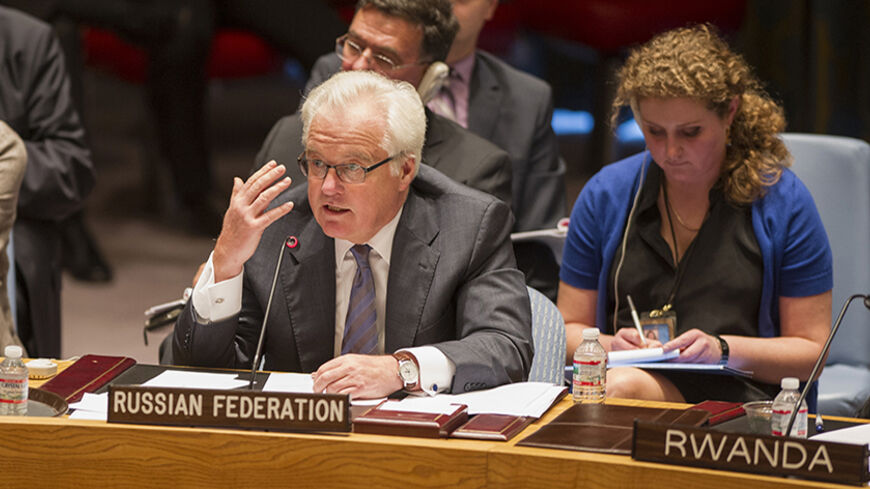 The Sept. 19 UN Security Council meeting on the Islamic State (IS) laid bare the regional rivalries that risk undermining calls for a united front against the extremist group.

US Secretary of State John Kerry, presiding over the UN forum, opened the session with an upbeat assessment that some 50 countries have joined the fight against the group also known as ISIS (the Islamic State of Iraq and al-Sham) or ISIL (the Islamic State of Iraq and the Levant) in some form or another. That message of unity was quickly undermined by strong opposition from countries critical of US plans to act in Syria without Syrian President Bashar al-Assad’s approval.

“The international coalition against ISIL, which is said to be in the offing, has yet to decide to pursue a serious strategy,” said Iranian Deputy Foreign Minister Abbas Araghchi.

Such a strategy, Araghchi said, should discourage “centrifugal forces” inside Iraq — namely, the Kurds — while working with Assad’s forces in Syria.

“A successful fight against ISIL requires helping and enabling the relevant central authorities to deal with this menace,” he said. “Any strategy that undermines these authorities — including the Syrian government, which has resisted ISIL for a few years — or differentiates between segments of the population in terms of protection, will be a recipe for defeat.”

Russia’s ambassador to the UN for his part flatly faulted the US invasion of 2003 and its support of the Syrian uprising for the current woes.

“We’re extremely concerned by the publicly mentioned intentions to strike ISIL in Syrian territory without cooperating with the Damascus government,” Vitaly Churkin said. “This would not only be a gross violation of the fundamental norms of international law, but could also have a destructive practical consequence, including for the humanitarian situation in Syria.”

Churkin went on to specifically denounce US President Barack Obama’s plan to train and equip vetted Syrian rebels, which Congress approved this week. He pointed out that US weapons given to Iraqi forces are now in the hands of IS. He called for the UN to hold a “brainstorming session” on the root causes of terrorism and said all nations should "entirely rule out any forms of foreign support for terrorist organizations."

"It’s extremely risky to see that the fight against ISIL could involve the [Syrian] opposition," Churkin said, "that they should be armed."

China’s ambassador to the UN also chimed in, if more subtly.

"In conducting international counterterrorism cooperation," said Liu Jieyi, “the international community should respect the sovereignty, independence and territorial integrity of the countries in question."

The comments follow the Obama administration’s assurances that it would not cooperate with Assad or coordinate with Iran as it sold its plan to combat IS on Capitol Hill this past week. Kerry has made it clear he’s willing to talk to Iran, however, even as Supreme Leader Ayatollah Ali Khamenei said Sept. 15 that he had vetoed those entreaties.

“Iran is very opposed to ISIL,” Kerry said at a House Foreign Affairs hearing on Sept. 18. "It would be terrible diplomacy not to ask their opinion and communicate, but there is no coordination or joint action with Iran."

Assad’s foes delivered the opposite message.

"The Syrian regime is the patron of extremism," said Turkish Foreign Minister Mevlut Cavusoglu.
"It is its policies based on sectarianism and ethnic divisions that trigger further instability and a threat in the wider region. As long as the regime remains in Damascus, stability can neither be achieved in Syrian nor in the region."

Despite the bickering, Kerry remained optimistic.

He heaped praise on the new government of Haider al-Abadi in Iraq, notably his decision to suspend airstrikes in Sunni areas and his public commitment to protecting civilians.

"Iraq has responded to the ISIL threat with a spirit of unity that the country has not experienced in decades, if ever," Kerry said.

He said Abadi’s government is at work on efforts to tackle issues such as the sharing of energy resources, regional autonomy and the composition of the armed forces that “have plagued Iraq throughout its modern history.”

"Today, we come together in support of the new Iraqi government, which has already made great strides in a short amount of time,” Kerry said. “And we must not miss this moment.”

He offered an upbeat assessment of international efforts to date, including offers of military support, $1 billion in humanitarian aid pledges and legislation in several countries that aims to tamp down on the recruitment of foreigners to go fight in Syria and Iraq. And Islamic financial center Bahrain announced at the meeting it would be hosting an international conference to combat terror financing during the first week of November.

"I’m absolutely [convinced] that through a global campaign that is comprehensive and committed, we can support the promise of the new government in Iraq and we can defeat the ISIL threat wherever it exists," Kerry said. "We’re well on our way. But that doesn’t mean that we’re where we need to be."

In one crucial respect, the UN meeting buoyed Kerry’s case for optimism by highlighting that all nations share the belief that IS poses a real threat.

"In 2003, acting against Iraq was something that divided this council,” said French Foreign Minister Laurent Fabius. "In 2014, in a very different context, acting for Iraq — and against the Daesh [IS] terrorists — is a duty for all of us.”

Laura Rozen contributed to this article.